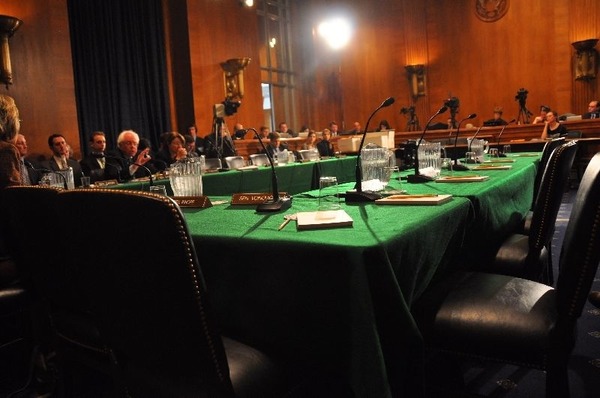 As promised, the Republican members of the Senate Environment and Public Works Committee boycotted the markup of the climate bill this morning.

Nearly all of the Democrats on the panel showed up, but of the Republicans only Sen. George Voinovich (R-Ohio) made an appearance. He reiterated that he wanted more time to allow for further study of the bill, then left immediately after his 15-minute opening statement.

Committee chair Barbara Boxer (D-Calif.), had offered several olive branches to placate Republcans, including a extension of the deadline for amendments until 5 p.m. today. She also adjusted the schedule on Tuesday to bring in EPA experts to answer questions about their modeling and analysis of the legislation. In addition, Boxer said she has confirmed with Senate Majority Leader Harry Reid that he will call for a five-week analysis of the legislation once it is combined with relevant measures from other committees. The EPA, Boxer noted, has compiled more than 340,000 pages of analysis on both the House and Senate bills already.

Voinovich, however, insisted that despite the stalling tactics he did really “want to work on a bipartisan basis.” He said: “I’m pleading to you, the chairman, as a matter of the golden rule, or the second commandment … for decency. I’m not trying to con you.”

The skepticism of Republican motivation, however, is due. Voinovich has made it clear that he doesn’t simply want further study from the EPA – he wants studies that use his own, more pessimistic assumptions in modeling the bill. And he blocked the confirmation of the second-in-command at EPA to get his way, putting in place an impediment to EPA work.

Moreover, while Voinovich – who holds onto the title of “moderate” on climate policy simply by virtue of acknowledging that climate change is happening – is the public face of this boycott, it’s also important to note the role of Ranking Minority Member James Inhofe (R-Okla.). Inhofe, a noted climate change denier, has shown no interest in substantive debate on legislation addressing an issue he doesn’t think is even happening. He was also not present for the markup this morning, though his press secretary showed up to hand out a statement insisting that they really, really do want to hold markup of a bill before the international climate negotiations in Copenhagen this December.

Meanwhile, Inhofe has made it clear that he has no interest in debating the merits of legislation at all. Discussing health care legislation with a group of constituents last week, he noted that he doesn’t even plan to read the bill: “I don’t have to read it, or know what’s in it. I’m going to oppose it anyways.”

The Democrats on the panel alleged that the boycott is pure partisan politics, rather than a desire for substantive debate. “The ‘Party of No’ not only doesn’t want to be productive, they don’t want to look productive,” said Sheldon Whitehouse (D-R.I.), to a role of empty Republican seats across the room. Whitehouse also pointed out that it would be difficult to conduct a full analysis of a bill that will still be changed in the markup process. “As soon as there’s an amendment, what are they going to do, say, ‘Stop, we need a 5-week analysis’?”

One of the more poignant points came from Arlen Specter (D-Pa.), who until April sat on the other side of the aisle. “We have seen a pattern of really excessive partisanship,” said Specter. “During my time in the Senate I have been part of very heated disagreements, but they have been disagreements on the merits, the substance … But you can’t disagree with an empty chair.”