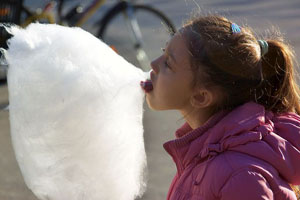 Six extra preview performances of “Little House on the Prairie – the Musical”: $50,000.

Benefit to the economy? According to the recipients of this stimulus money: Priceless.

Last week, the federal government released the first comprehensive tally of the nearly $800 billion economic stimulus package. And while the White House has heralded marquee projects like road construction and solar panel factories, the stimulus package is also made up of hundreds of smaller purchases like office supplies, gasoline and lab rats.

Some of the more unusual purchases are bristling stimulus critics.

“This was not what people had in mind when they were talking about job creation,” said Leslie Paige, spokeswoman for Citizens Against Government Waste. “It was a gigantic pork barrel project from the first day out of the box, and it has proven itself to be every bit as swinish as we thought it would be.”

Waste, of course, is in the eye of the beholder.

Among the 150,000 stimulus expenditures released last week are dozens of iPods, toilets and trips to resort hotels. But, according to the reports, those seemingly questionable purchases are being used to enhance technology in the classroom, make bathrooms accessible to the disabled and train special education teachers.

“If you build a bridge to nowhere, that might be a bridge that you’re going to use that I’m not going to use,” said Ed Pound, spokesman for the government board charged with investigating waste and fraud in the stimulus package. “That’s not a call we’re going to make.”

The White House provided some insight on what types of projects don’t meet the administration’s standards when it announced last month that it had stopped and altered 170 proposals so far. On the list were projects to straighten headstones, freeze fish sperm and steam-clean bird droppings from buildings.

But when the stimulus oversight board released its report last week, other stimulus recipients had funded the exact same types of projects to reset headstones, freeze fish sperm and power-wash bird droppings from bridges.

The White House said it shot down an Agriculture Department proposal to buy Taser stun guns for sheriff’s deputies. But law enforcement agencies around the country have used stimulus money to buy hundreds of Tasers.

“The point of posting all Recovery Act spending online was to enable the press and public to find potential dubious expenditures and call them to our attention,” Liz Oxhorn, the White House stimulus spokeswoman, said in an e-mail. “We will look at these projects to see if they meet our standards and are consistent with sound use of Recovery Act funds.”

The administration hasn’t explained why the 170 projects it flagged were troublesome and provided vague details about who even proposed them. Oxhorn said Wednesday that publishing the list was an effort to open up the decision-making process – not to expose waste.

The award for most unusual stimulus project could perhaps go to Malcolm MacIver, a neurobiology and engineering professor at Northwestern University.

MacIver received a $1.25 million grant to use electric fish from the Amazon to study how animals take in sensory information to move quickly in any direction. (See video.) The research could help in the development of underwater robots to find the source of toxic leaks. Further in the future, it could lead to new, far more agile prosthetics.

For public outreach – a component of most National Science Foundation grants – MacIver has proposed an interactive art exhibit. Sixteen species of electric fish will be arranged in sculpted fish tanks. The tanks will be connected to an amplifier that can convert the different frequencies that the fish emit into sound. Using a hacked controller from the Nintendo Wii video game system, visitors will be able to turn the amplifiers on and off, essentially conducting an orchestra.

The fish even have names that sound like rock bands: Black Ghost Knifefish, Glass Knifefish and Aba Aba.

MacIver said the innovative approach will be much more powerful and engaging than traditional outreach efforts, such as giving a lecture to a high school class.

“It’s a competitive necessity for our country to increase the level of science literacy,” he said. “To help crack the nut of disinterest in science, it helps to engage people with material which they can relate to and which they find interesting and fun.”

The Show Must Go On

Funding for the arts has always been a flashpoint in the debate over government spending. And the stimulus reports provide a sampling of the eclectic tastes of America’s arts community.

Thanks to the stimulus package, the Lincoln Center in New York City will be able to bring in jazz musician Pablo Aslan for a “tango salon.” According to the data released last week, the stimulus saved the jobs of three actors in Chicago Shakespeare Theater’s performance of “Richard III” and the designer of the Cezanne exhibit at the Montclair Art Museum in New Jersey.

Nearby at the Paper Mill Playhouse in Millburn, N.J., the city-owned theater was able to add six preview performances of “Little House on the Prairie – the Musical,” which starred an actress from the TV series, Melissa Gilbert. (She was TV’s Laura Ingalls). The stimulus money, along with a private donation, allowed the theater to pay for an additional week of the cast’s salaries and fine-tune the production based on the audience’s feedback.

Paper Mill’s executive director, Mark Jones, said the grant had an enormous economic effect. Many of the 4,000 to 5,000 people who saw the preview performances also went out to dinner, got their hair done and shopped, he said. The actors had extra spending money for rent and food.

“I think everybody’s taken a hit” in the recession, Jones told us. “Whether it’s a manufacturing job or an artist’s job or a teacher or a science researcher, they all add value to our cultural fabric.”

Cotton Candy for a Health Center

Last week’s stimulus reports are sometimes brimming with so much detail from construction firms that you could practically build the road yourself. Other times, they’re lacking even basic information.

For example, what does a $31 purchase at the Oriental Garden Chinese restaurant in Banks, Ore., have to do with providing a better education for children with disabilities?

“We kicked the year off with providing some in-service training,” said Shelley Mitchell, student services director for Banks School District 13, which received $107,000 for special education. “We bought some appetizers.”

The workshop for eight employees took place after school but before dinner and involved planning to help handicapped students transition into the adult world. The rural district about 25 miles outside Portland didn’t have enough space for the team meeting.

“It’s the only restaurant in town,” Mitchell said. “Well, we do have a Subway.”

Thousands of dollars in stimulus money has been spent on food. The breakfast at Fuddruckers was an expense for two officers of a Texas business attending a National Science Foundation meeting in Washington, D.C. Somebody else spent $5.74 at a Carl’s Jr.

Another purchase with scant detail comes from Northeastern Oklahoma Community Health Centers, which in June opened a new clinic in a low-income area where many workers don’t have insurance.

According to Dr. Sharon Zang, the health centers’ chief executive, the machine was paid for with private donations. But it was listed in the stimulus report because the purchase was from the same bank account used for the stimulus grant.

The machine – along with hamburgers, hot dogs and balloons – was used to market the clinic and entertain children while their parents learned about the services available.

“We did tours through the clinic,” Zang said. “We told them about [our] sliding fee. We told them about Medicaid and Medicare. A lot of people don’t think they can get to a doctor because of their health insurance.”

Many of the people who attended the picnic have since come to the clinic for care, she said.

“The community has really supported this,” she said. “It’s really a wonderful story.”