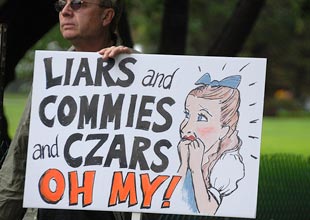 You have to hand it to Michele Bachmann: She has succeeded in turning the GOP into one big Tea Party.

This past weekend, the Minnesota Republican went on Fox News and called on viewers to show up on the Capitol lawn on Thursday at noon for a press conference and a last ditch attempt to kill health care reform.  The gathering that resulted was marked by the now-routine extremism of the Tea Party conservatives.  “I’m a bitter gun owner who votes,” read one sign. Others questioned President Obama’s citizenship, portrayed him as Sambo, or called him a traitor. One said, “Obama takes his orders from the Rothschilds.” Old ladies wore red T-shirts decrying “Obamao care.” The crowd also took spirited swipes at House Speaker Nancy Pelosi. At one point someone yelled, “Put down your Botox and show yourself.”

But what was most noteworthy was that the entire House Republican leadership was also in attendance—and their rhetoric was just as over-the-top as some of the protesters. House Minority Leader John Boehner declared the health care bill the “greatest threat to freedom I have seen.” In essence, Congressional Republicans were merging with a movement that gives open expression to racist and anti-Semitic sentiments.

The crowd was several thousand strong, many bused in by Americans for Prosperity, a group created by the owners of Koch Industries, a huge oil and gas conglomerate. The AFP chapter from New Jersey reportedly sent 29 buses. Four AFP buses came from Maryland’s Eastern Shore, and more came from Richmond and North Carolina. Lots of people in the crowd carried AFP signs or stickers warning “Hands off my health care.”

During the rally, all the prominent House GOP legislators wanted a shot at the mike, including Boehner, whip Eric Cantor of Virginia, Roy Blunt of Missouri, presidential aspirant Mike Pence of Indiana, and what seemed like the entire Texas GOP delegation. There were so many Republicans blow-bagging that dozens of hungry patriots were heading for the exit long before the speeches ended. But aside from Bachmann herself, only South Carolina Rep. Joe Wilson won overwhelming adoration from the crowd—he could barely get a word in over the rousing cheers of “Thanks Joe!”

Most attendees looked old enough to have already experienced government-run health care themselves. (Walking to the Hill from Union Station along with people headed to the rally, I could hear some of them wheezing and joking that their aging spouses should have rented Segways to get them to the event.)  This demographic was reflected in the celebrity lineup apparently arranged by Bachmann, who said that her “good friend,” the actor Jon Voight, was the first person to call her at home after her Fox appearance.

Voight and John Ratzenberger—better known as “Cliff from Cheers”—shared the same message: The Democrats’ health care plan will send the country down the path to European socialism. The crowd erupted with chants of “Nazis! Nazis!”  Ratzenberger insisted that the Democrats’ philosophy doesn’t come from America but from “overseas,” where, he said, quoting Churchill, they embrace the idea of the “equal sharing of misery.” Voight warned darkly that President Obama wants to use the health care bill to create national socialism, and that Americans would end up like Europeans where health care “leads to many deaths.” Standing in front of them was a protestor who carried an enormous sign that read, “National Socialist Health Care—Dachau, Germany 1945” over a large photo of a stack of naked bodies piled up at a Nazi death camp.

But Voight and Ratzenberger’s speeches were mild stuff compared with that of talk show host Mark Levin. After ranting about the various things “they” want to take over and ruin—everything from Social Security to the banking system to the auto industry—Levin proclaimed: “Now they want to control health care. They want to play God and decide who lives and who dies.” The crowd responded with cheers of  “Impeach Obama!” (At about this time, President Obama was making a surprise appearance at the White House press briefing to praise the American Medical Association and the AARP for endorsing the health care bill.)

Many people I spoke with said they came because of “the babies,” and their belief that the health care bill will fund elective abortions. Tony Perkins, the head of the evangelical group the Family Research Council riled up the crowd with claims that the bill is “another bailout of the abortion industry with your money” and that Planned Parenthood had helped draft the measure.

Aside from the abortion foes, most protesters seemed to be focused not so much on the specifics of the bill, but on its price tag. “The deficit is the thing I’m most against,” said Dr. Jo Allen Jones, an ER doctor from West Virginia who showed up in her white coat and proudly pointed out the blood spots on it. She had heard about the march from Glenn Beck and Americans for Prosperity. She was standing with two other doctors from Alabama, also in white coats, who were concerned about future reimbursement rates and the lack of malpractice lawsuit relief in the bill.

Sharon Johnson, from Williamstown, New Jersey, had driven down in the morning simply because she had seen Bachmann on Fox. She came with her wheelchair-bound friend, a retired teacher who now suffers from a rare degenerative nerve disorder much like Parkinson’s. The trip, Johnson said, was a bit of a sacrifice because she had stayed up late watching the World Series, and “after a half a case of beer” she wasn’t feeling so great this morning.

She’s an Army veteran and gets her health care from the Veterans Administration. “I guess you could say I’m on the public option!” she said with a laugh. But she’d had some experience with a government-run health care system in the Army, where she was unable to get an operation on her shoulder for a year. She’s afraid these types of problems will expand if the reform bill passes. Her friend, who had trouble speaking because of her disease, was attending simply because she was afraid she would lose her health care under the bill. She, too, has government-provided health care, via the state of New Jersey.

These sorts of contradictions were apparent everywhere. But one thing about the rally proved sparklingly clear: Michele Bachmann is a major star. When she stepped up to the podium on the Capitol steps, the crowd went wild. It wasn’t too hard to imagine the event as a warm up for the 2012 presidential election, where Bachmann might prove a far more viable candidate than Sarah Palin. The rally confirmed her primacy as a leading voice of the Republican Party—a party that, with this protest, has fully embraced the conservative movement’s most extreme elements.