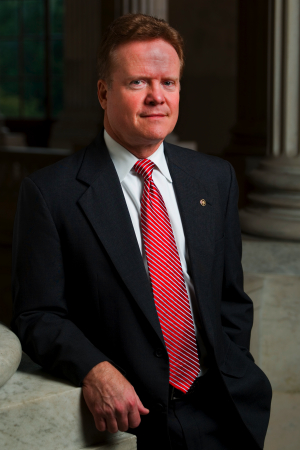 Democrat Jim Webb of Virginia threw another wrench in the Senate climate debate on Monday, announcing that he is cosponsoring an alternative bill with Republican Senator Lamar Alexander of Tennessee. Their solution to the climate problem? A massive handout to the nuclear industry.

“This is an issue that cries out for not only for bipartisanship but constructive leadership,” said Webb, apparently not recognizing that there is already a serious bipartisan effort underway in the Senate.

Webb signaled that he is not likely to vote for the climate bill that Sen. John Kerry (D-Mass.) is working on with Joe Lieberman (I-Conn.) and Lindsey Graham (R-S.C.), despite the fact that it is expected to include generous support for nuclear energy. The existing House and Senate climate bills are too “enormously complex,” Webb complained to reporters, concluding: “In its present form I would not vote for it.”

A massive investment in nuclear power, however, is something he and Alexander can get behind. “We believe there’s a more bipartisan interest in clean energy in the Senate than it would appear when you take a look at the climate change debate,” said Alexander, who opposes a cap-and-trade bill. “Speaking for myself, I don’t want to see us get so stuck on climate change that we don’t move ahead on the things we can agree on.”

Alexander and Webb’s bill would provide $100 billion in loan guarantees for “carbon-free electricity,” which would mostly go to new nuclear plants. Their bill would also provide $200 million per year for five years to the Nuclear Regulatory Commission to speed up approval of new reactors, another $100 million each year for 10 years for education and training for nuclear workers, and $50 million each year for 10 years to research how to extend the life of existing reactors. They aim to double the use of nuclear power in the next 20 years, and estimate that the total cost to the government over that period would be $20 billion.

Their bill would also fund funds for research and development of other energy technologies, which they call “mini-Manhattan projects”—$150 million each for solar energy, advanced biofuels, carbon-capture-and-sequestration, nuclear fuel reprocessing, and batteries for electric vehicles. However, there’s no support for wind power in their package, probably because Alexander has said repeatedly that he’s not particularly fond of windmills. “If we were going to war, we wouldn’t mothball our nuclear Navy and start subsidizing sailboats,” Alexander said at a meeting of the American Nuclear Society on Monday morning. “If climate change as well as low-cost reliable energy are national imperatives, we shouldn’t stop building nuclear plants and start subsidizing windmills.” Alexander also said he thinks that windmills take up too much space.

Alexander proposed a plan back in August that called for 100 new nuclear plants in 20 years. He says his office has run the numbers, and a massive nuclear expansion could achieve carbon dioxide emission reductions similar to those under cap-and-trade.

But even before Alexander and Webb introduced their proposal, nuclear power was one of the climate debate’s biggest winners. Most estimates predict that the House bill would already result in the construction of 100 new nuclear plants over the next 20 years. And there’s an even more specific nuclear title in the version of the bill that the Environment and Public Works Committee advanced earlier this month.

But although Webb argued that their plan is “targeted and achievable,” the reality is that such a massive expansion of nuclear power would be expensive, and might not ever happen. A study released in June by economist Mark Cooper of the Institute for Energy and the Environment at Vermont Law School found that building and operating 100 new nuclear reactors would cost between $1.9 trillion and $4.1 trillion more over the life of the reactors than it would cost to generate the same amount of electricity from renewables and energy efficiency. New reactor construction would be almost entirely dependent on taxpayer support, as the private sector has been unwilling to make big investments in the sector. Cooper released a new report this month analyzing the costs a massive nuclear expansion would pose to taxpayers, concluding that “loan guarantees are a bald face attempt to override the judgment of the capital markets, which will leave taxpayers and ratepayers holding the bag.”

The senators believe, however, that their legislation can find broad consensus in the Senate. As Alexander put it: “This is a piece of legislation that could stand on its own and could be supported by senators who favor economy-wide cap and trade and senators who don’t.”