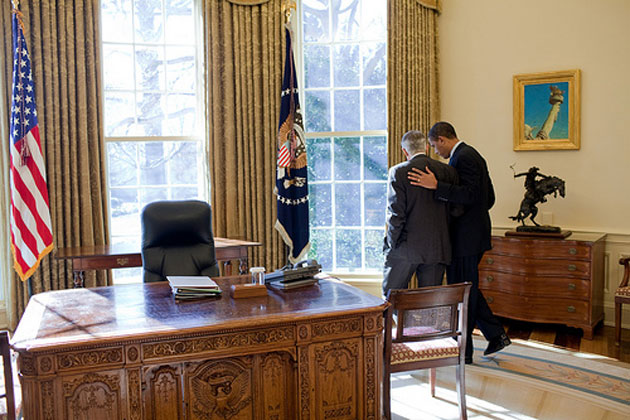 President Barack Obama talks alone with Senate Majority Leader Harry Reid in the Oval Office. (White House photo.)Senate Majority Leader Harry Reid won praise on the left for including a public option in the health care bill that he’s bringing to the floor of the Senate. But Reid’s coming up on a big decision: while he may be able to wrangle the 60 votes to start debate on the bill tomorrow, there’s evidence to suggest he many not be able to hold the Democratic caucus together to get the 60 votes necessary to end debate on a bill that includes a public option and move to a final vote. That’s because conservative Democrats like Nebraska’s Ben Nelson and Arkansas’ Blanche Lincoln see a lot of potential value in bucking their party. So the left is bracing for Reid to betray them by removing the public option from the bill in order to earn the vote of Sen. Olympia Snowe (R-Maine). Current DC conventional wisdom says that if Snowe votes for cloture on the bill, allowing it to come to a final vote, conservative Dems will almost certainly join her. Here’s FDL’s Jon Walker arguing that Reid can’t be trusted:

Many of Snowe’s top demands managed to make their way into the bill.

Harry Reid decided to take the terrible “free rider” provision championed by Snowe from the Senate Finance committee bill instead of the employer mandate from the [Health, Education, Labor, and Pensions committee] bill. Reid went with a very much weaker individual mandate more in keeping with the wishes of Snowe. He also kept the terrible “nationwide plans” from the [Senate Finance Committee] bill. Snowe strongly backs the nationwide plans and claimed it was one of the reason she voted for the bill in committee….

…If progressives find out that Reid’s support of the public option was purely for show, while at the same time he secretly worked with Snowe to kill it with a trigger, that would not go over well with the base. Reid does have the power to get a public option passed, there is no good excuse for failure.

The left isn’t taking Reid’s support as a given. On Saturday, as the Senate moves towards an initial vote on Reid’s health care bill, the Progressive Choice Campaign Committee (PCCC) will be canvassing Reid’s home state of Nevada with robocalls praising his efforts. The call will reach at least 10,000 households every day for the next two weeks “so long as Reid stays strong” on the public option. The message: “If Reid Fights, We’ll Get His Back.” The implication, of course, is that if Reid doesn’t keep fighting for the public option, the left won’t back him in his tough reelection battle next year.

If Reid can figure out how to secure the votes he needs for cloture without enraging the left, he’ll look like a political genius. But if he fails to get the votes, he’ll look like a fool. And if he gets the votes but loses the left by gutting the public option, he may find himself out of a job next November. It’s a tough spot to be in.