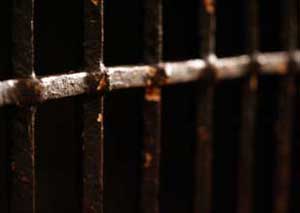 Photo used under Creative Commons license by Flickr user <a href="http://www.flickr.com/photos/nicmcphee/">Unhindered by Talent</a>.

Whatever happened to the so-called “black sites,” where suspected terrorists were held overseas by the CIA and submitted to harsh interrogations that included torture? On April 9, CIA chief Leon Panetta issued a statement notifying CIA employees that the agency “no longer operates detention facilities or black sites”—which were effectively shut down in the fall of 2006—”and has proposed a plan to decommission the remaining sites.” In the months since then, lawyers for several terrorism suspects have been trying to determine the status of these sites, as they seek evidence for their cases. But the US government has refused to disclose anything about what it has done with these facilities.

In his statement, Panetta noted, “I have directed our Agency personnel to take charge of the decommissioning process and have further directed that the contracts for site security be promptly terminated.” (He added that the suspension of these private security contracts would save the agency up to $4 million.) Though Panetta’s order might have seemed like good news to civil libertarians and critics of the Bush-Cheney administration’s detention policies, lawyers for several detainees who had been held in such sites immediately worried about one thing: “We thought they would be destroying further evidence,” says George Brent Mickum IV, a lawyer for Abu Zubaydah, a captured terrorism suspect whom President George W. Bush described (probably errantly) as “one of the top three leaders” of al Qaeda. (In 2007, the CIA disclosed that it had destroyed videotapes of interrogations of Zubaydah, who was waterboarded 83 times.)

Four days after Panetta announced the decommissioning of the black sites, Paul Turner and Gerald Bierbaum, two public defenders in Las Vegas representing Abd al-Rahim al-Nashiri, an al Qaeda leader accused of plotting the USS Cole bombing, filed an emergency motion in federal court requesting the “preservation of CIA secret detention facilities.” Attorneys for Zubaydah—whose significance as a terrorism suspect has been hotly debated—filed a similar motion, asking a federal court judge in Washington DC to preserve the black sites where Zubaydah was held and the interrogation instruments used at these facilities. “It’s a crime scene,” says Joseph Margulies, an attorney for Zubaydah. Margulies says that his intent is to obtain evidence that will allow him to reconstruct what occurred when Zubaydah was held: “to recreate the stress the person was under.” He is particularly interested in obtaining access to the “dog box,” a small cage in which Zubaydah says he was kept for a prolonged period.

Turner and Bierbaum, who in July 2008 filed a habeas case on behalf of al-Nashiri, are also seeking evidence regarding the interrogation of their client. “Physical evidence matters,” says Turner. “It’s pretty good proof that what happened did happen. It’s better validation of a client’s story.”

Al-Nashiri and Zubaydah are two of the three detainees whom the CIA has acknowledged were waterboarded. Khalid Sheikh Mohammed, the 9/11 mastermind, was the third. All three are now imprisoned at the Guantanamo camp. When Attorney General Eric Holder recently announced that Mohammed will be transfered to New York City to stand trial in a civilian court, he said that al-Nashiri would be tried in a military commission. He said nothing about Zubaydah. As one of the first suspected al Qaeda operatives nabbed—and Zubaydah’s standing as a senior al Qaeda operative is now uncertain—he was treated to particularly tough interrogations, which has made his case especially hard for the Obama administration to resolve.

Lawyers for another terrorism suspect, Ahmed Khalfan Ghailani, a former Guantanamo detainee now being tried in civilian court in New York City for allegedly participating in the plot to blow up US embassies in Kenya and Tanzania in 1998, have also asked a federal court judge to order the US government to preserve black sites where their client was held.

Many of the filings in cases related to the black sites have been stamped secret and kept out of the public record. Gregory Cooper, a lawyer for Ghailani, citing classification restrictions, won’t say what he’s hoping to find at any black sites where his client was held: “I can’t tell you.”

Lawyers representing al-Nashiri and Zubaydah say that no decisions related to their requests to preserve the covert facilities have been issued. In the al-Nashiri case, Justice Department attorneys noted that the request to preserve the secret detention facilities involves “highly sensitive issues affecting critical national security interests”—without spelling out the issues or the interests. Government lawyers in these two cases, though, have promised that the status quo at the secret prisons would be preserved until further notice is given to the legal team for these detainees, but they have not provided any information about the current condition of the black sites. It could be that the facilities were decommissioned before the promise to preserve the status quo was made. “They could have destroyed the sites before the motion,” says Bierbaum. Mickum adds, “If they already destroyed the stuff, preserving the status quo is meaningless.” He notes that Justice Department lawyers have filed a secret motion in response to Zubaydah’s lawyers’ request to preserve the black sites—and the Zubaydah attorneys don’t know what it said.

Was anything left at these black sites to preserve? No doubt, some of these facilities were makeshift and could have been packed up rather quickly and their equipment destroyed or shipped off. If records existed at these facilities, they could have been easily shredded. In any case, even though Panetta has publicly discussed the sites, the CIA is refusing to discuss them. “Because this involves a matter before the court, it’s not something on which I can comment publicly,” remarks CIA spokesperson Paul Gimigliano. That is, he won’t confirm or deny if Panetta’s public decommission order has been carried out. The final status of these facilities remains in the dark.