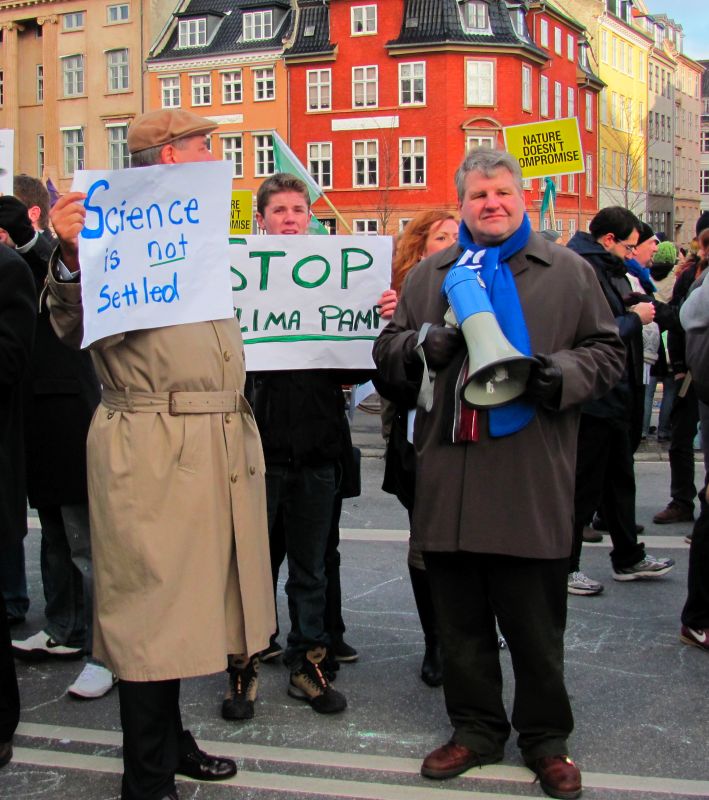 As Josh Harkinson reported yesterday, plenty of dirty American money is flowing to international climate change denial groups, who have been hard at work to derail progress on climate. I caught up with one of those groups, the Committee for a Constructive Tomorrow (CFACT), in downtown Copenhagen at their rally to “celebrate demise of UN climate agreement,” as roughly 60,000 pro-climate action protesters were marching through the city. At that point, the celebration was a little preemptive, but about 30 representatives from CFACT were on the scene wearing branded scarves and waving signs pointing out that it’s cold outside and that “Without CO2, Nature Suffers.”

The handful of deniers didn’t stand much of a chance beside the pro-climate forces. But that doesn’t mean they didn’t try. They passed around a megaphone singing Christmas-themed songs about Al Gore (“He’s making a list, he’s checking it twice, gonna find out who’s carbon neutral or not.”), and they appeared at the end of the rally with their banner proclaiming “CO2=Life.”

I talked briefly with CFACT president David Rothbard, who mentioned their recent listing at No. 6 on our roundup of top climate deniers. “It’s neat to be number 6, but we’d like to get higher,” he said.

Their plan for getting a higher rank ahead of next year’s climate summit in Mexico is to “educate” more people, he said. “We’ve been saying for 20 years now that the science isn’t settled, but there’s a rush to judgment,” said Rothbard. “They’ve said the science is settled, we need to move to the policy. We say it’s anything but.”

Here are some photos from their “rally” in Copenhagen.