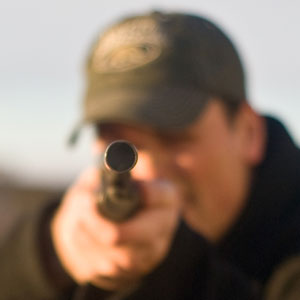 Right-wingers have long viewed health care reform as a cover for various dastardly liberal plots—from killing off grannies and unborn babies to ushering in a socialist state. Now, pro-gun activists see yet another hidden agenda: Health care legislation, they say, threatens their right to bear arms.

The accusation comes from Gun Owners of America, a 300,000 member group that proudly advertises itself with a quotation from Ron Paul: “The only no-compromise gun lobby in Washington.” The GOA sits well to the right of the National Rifle Association, which it tends to dismiss as a pack of sell-outs. Yet, like the Tea Partiers who draw Republican congressional leaders to their racially tinged protests against “National Socialist Health Care,” the GOA could influence the reform debate. GOA has thrown itself wholeheartedly into the battle for the soul of the GOP, pledging to help oust “RINOs” and other insufficiently trigger-happy Republicans in the 2010 primaries—and to go after conservative Democrats, too.

No version of the reform legislation mentions firearms. But that hasn’t stopped the Virginia-based group from raising the alarm about what it calls the “anti-gun ObamaCare bill.” The GOA has fixated on the proposal for a nationwide system of electronic health care records, which, it says, “will most likely dump your gun-related health data into a government database…This includes any firearms-related information your doctor has gleaned or any determination of post traumatic stress disorder or something similar, that can preclude you from owning firearms.”

In other words, better record-keeping and information-sharing might lead some people to be denied gun permits on the basis of serious mental illness. Presumably, this could include people like Seung-Hui Cho, the student who gunned down 32 people in the 2007 Viriginia Tech massacre. Less than two years before the shooting, a judge had declared Cho “an imminent danger to himself because of mental illness” and ordered him into psychiatric treatment. But Virginia failed to supply this information to the FBI’s National Instant Criminal Background Check System, so Cho was able to purchase two semi-automatic pistols in local gun stores, along with two 10-round magazines of ammo on eBay. After the massacre, even George W. Bush willingly signed a new gun control bill—the first in 13 years. But GOA doesn’t think insanity is necessarily incompatible with gun ownership.

One of the group’s email alerts was titled “ObamaCare Could be Used to Ban Guns in Home Self-Defense.” The premise, as described by PolitiFact, is that in order to keep costs down, bureaucrats “will target people who have ‘excessively dangerous’ behaviors that officials believe will raise the cost of health care.” The legislation’s “special ‘wellness and prevention’ programs,” the GOA warns, “would allow the government to offer lower premiums to employers who bribe their employees to live healthier lifestyles—and nothing within the bill would prohibit rabidly anti-gun Health and Human Services [HHS] Secretary Kathleen Sebelius from decreeing that ‘no guns’ is somehow healthier.” (Sibelius earned GOA’s unending wrath when she vetoed concealed-carry gun legislation as governor of Kansas.) “It is even possible that the Obama-prescribed policy could preclude [insurance] reimbursement of any kind in a household which keeps a loaded firearm for self-defense.”

These far-fetched extrapolations are quickly spreading beyond the GOA’s membership. The Washington Examiner quoted Dave Kopel, research director of the libertarian Independence Institute of Colorado: “The more you socialize costs, the more you empower the argument that the government has the authority to control private behavior.” Kopel continued, “I don’t see anything in the bill that stops HHS from saying people get higher premiums for unhealthy habits such as owning a gun or a handgun.”

With Republicans sticking to the party line against health care reform, the GOA is going after vulnerable Democrats. After the Senate cloture vote, GOA attacked Democrats from conservative states who “were bribed into selling out the American people because Harry Reid ordered them to do so” and declared, “GOA is looking into which states are the best targets for recalls—and you can be sure that we will be pursuing this option aggressively, exposing the Senators who sold their vote.” It provided a model letter for its members, which begins, “Just so you know, I will not forget how you voted on Saturday, November 21 when you threw your support in favor of anti-gun socialized health care.”

If any lawmakers are swayed by the GOA’s arguments, it will mark a capitulation to extremists of a truly hateful variety. While his views on some subjects may not represent all GOA members, Larry Pratt, the group’s executive director for 26 years, has been immersed in far-right extremist activity for several decades—a fellow traveler and inspiration to the militias that sprung up in the 1990s.

Leonard Zeskind, an expert on white nationalist movements, describes Pratt as having “one foot in the political mainstream and the other in the fringe.” Pratt hails from Fairfax, Virginia, and served two terms in the state legislature in the 1980s. He made national headlines in 1996, while serving as cochair of Pat Buchanan’s presidential campaign, when it was revealed that he’d attended a meeting of the racialist far right in Estes Park, Colorado, in 1992. Among the speakers were Aryan Nations leader Richard Butler and legendary Klansman Louis Beam. As Zeskind wrote in Rolling Stone, “Although many of the participants had met before, this gathering was different. This meeting marked the birth of the modern militia movement that would tie well-armed radicals to gun advocates in a right-wing national network.” Beam laid out his theory for carrying forward a white revolution against the Zionist Occupied Government by means of a “leaderless resistance” cell strategy. Instead of operating via mass organizations with known chains of command, Beam said, right-wing revolutionaries should go underground in secret cells, unknown and unrelated to one another. The cells could number a few or many members, or individuals could act on their own as “Phineas Priests.”

It’s not a stretch to say that this meeting, and the ideas and resolve that came from it, may have helped inspire not only the modern militia movement, but also crimes ranging from the murders of several abortion providers to the Oklahoma City bombing. And, as Zeskind writes, Larry Pratt was in the midst of it all:

Pratt stood at the podium and peered out from behind his glasses. He confessed to the crowd of gun lovers that he wasn’t a particularly good shot or an enthusiastic hunter. “I bought my first gun in 1968, during the riots in Washington, D.C.” that followed the assassination of Dr. Martin Luther King Jr., he said. At the time all he could buy was a shotgun. “If they’d had that assault rifle, so-called, for sale, and I’d seen that big old magazine there at the time, that’s exactly what I would have bought.”

Pratt’s history exemplifies the blurred boundaries between the “mainstream” and the “fringe”—the conservative movement and the extremist (and usually racist) far right. Pratt also set up the Committee to Protect the Family Foundation, which attacked gays and demanded that people with AIDS should be quarantined. He was a keen backer of Randall Terry and Operation Rescue. Pratt is also a founder of the anti-immigrant groups U.S. Border Patrol and English First, and a contributing editor to a periodical of the anti-Semitic United Sovereigns of America.

Pratt has said that he is not a racist—though his record suggests otherwise. And the apparent influence of a radical group like GOA seems especially sinister right now. We live at a time when the election of the first black president has coincided with an explosion in gun sales, and when attendees at anti-health care reform town halls carry assault weapons. All of which is fine with GOA. Commenting on reports of “Americans openly carrying firearms outside presidential appearances,” Pratt told CBS News that “the most remarkable thing about this is that some find this behavior to be remarkable.” A few days later, Chris Matthews asked GOA spokesperson John Velleco whether people attending a presidential event should “be allowed to walk in the door armed…Should they be allowed to come into the president’s company and sit in the first row with a loaded gun?” Velleco had no objections.

Since the militia movement’s heyday in the 1990s, Pratt has faded from the spotlight. The battle over health care reform, however, has offered him and his supporters a prime opportunity to reload.