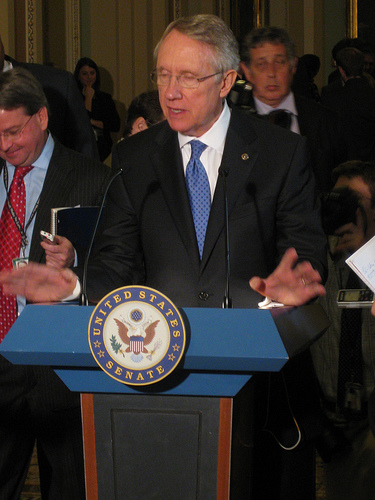 In lieu of a public option for health-care reform, Senate Majority Leader Harry Reid announced a tentative, still-nebulous compromise this week that allows people 55 to 64 to “buy in” to Medicare starting in 2011. According to the Kaiser Family Foundation, the buy-in could affect 4 million people without health insurance. And while Reid’s plan, concocted with five Democratic and five centrist senators dubbed the “Gang of 10,” has been assailed as a major step toward single-payer care (and—gasp!—socialism), other critics do in fact raise raise some serious issues on how Reid’s plan completely misses the mark.

First, Medicare is hardly well-suited to absorb additional users. As the Medicare Payment Advisory Commission (Medpac) told Congress (PDF) in June, Medicare’s financial breaking point is fast approaching, not to mention that 60 percent of people on Medicare now pay for supplemental coverage because of cost-sharing caps. Add to that mess three or four million 55 to 64-year-olds who’re likely to need much more care than thirty- or even fortysomethings, and you’re looking at a potentially serious viability crisis for Medicare.

The other big unknown with expanding Medicare is whether the health-care system in place—in particular, the physician workforce in place right now—can handle them. To illustrate, I turn to a subject more familiar than the annals of Medicare: the iPhone. When the iPhone arrived in stores (i.e., when people get access to health insurance), millions rushed to the nearest retailer and waited in long lines to buy one. However, when that huge crowd of people then turned on their phones and connected AT&T’s network (i.e., newly insured people going to their doctors and receiving care), they overloaded a vastly underprepared system. The result: dropped calls, spotty service, slow loading times, and seething techies. In other words, the infrastructure buckled under the weight of all those new users.

Much the same could happen to Medicare which, like all American health care, lacks the capacity to handle a massive influx of new people. Dr. Ted Epperly, president of the American Association of Family Physicians, told me, “If all of a sudden President Obama increases access to the uninsured, there will be a huge capacity that the demand will not be met for. People will have access issues, and they will be sicker”; and though he was referring to health care in general, his quote equally applies to Medicare. As American Medical Association president J. James Rohack said in a statement this week: “Currently, the flawed Medicare physician payment formula will cause a drastic 21 percent cut to physicians caring for Medicare patients in January, and 28 percent of Medicare patients looking for a new primary care physician are having trouble finding one.” Rohack added that the AMA doesn’t favor Reid’s plan because the group “has longstanding policy opposing the expansion of Medicare given the fiscal projections for the future,” and instead prefers a health insurance exchange plan.

“Expanding the Medicare system to persons 55-64 years old would ultimately hurt patients by accelerating the financial ruin of hospitals and doctors across the country. Mayo Clinic alone has begun to limit the number of Medicare patients and their practices, and the growing number of other providers will. This is clearly an unsustainable model.”

Coming from one of the most highly regarded health-care institutions in the nation, it makes you wonder whether Reid’s policy has less to do with healthy Americans and more to do with politically palatable solutions.