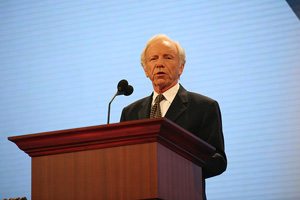 As the Senate begins voting on health care reform legislation, Sen. Joe Lieberman, the onetime Democrat from Connecticut, has continued to play a pivotal role. He has threatened to join a GOP filibuster against the bill if it contains a public option, referring to the last-resort government-run insurance plan as “a risk we can’t afford.” He depicts his position as one of principle, but in reaching his current stance, Lieberman has had to run away from his own history.

In a recent column for the Hartford Courant, Lieberman cited the rising costs of Medicare to justify his opposition to expanding the government’s role in health care. But in 2000, when he was Al Gore’s running mate, Lieberman campaigned on a platform of offering everyone 55 and older an option to “buy-in” to Medicare. That proposal—which was a central part of the Gore-Lieberman campaign’s health care plan—essentially would have created a robust public option for people aged 55 to 65.

These days, as Lieberman rails against the public option, he won’t comment on whether he still favors that idea. Asked if Lieberman believes Medicare should be expanded in this fashion, a spokeswoman for the senator said in an emailed statement, “Senator Lieberman is a strong supporter of Medicare and Medicaid and supports efforts to strengthen those programs and to help the millions of Americans who rely on those programs for their health care.” That was a dodge. The statement did not indicate whether or not Lieberman currently backs his Medicare expansion proposal.

Lieberman has been moving to the right for years now. After Ned Lamont, an anti-war candidate, beat Lieberman, who supported George W. Bush’s Iraq War, in the Democratic Senate primary in 2006, Lieberman ran—and won—as an independent. Although he still caucuses with the Democrats, Lieberman campaigned vigorously for his friend John McCain in the 2008 presidential election.

While he was always a hawk on foreign policy, Lieberman’s domestic views have become increasingly conservative—especially since the election of Barack Obama. In a few years, he’s gone from being a favorite of groups like the American Public Health Association that back single-payer health care reform, or “Medicare for all,” to opposing the much more limited public option. Why has he changed so much? “For Lieberman, the personal has become political,” Peter Beinart suggested in the Daily Beast last month:

[Lieberman is] bitter. According to former staffers and associates, he was upset by his dismal showing in the 2004 Democratic presidential primary. And he was enraged by the tepid support he got from many party leaders in 2006, when he lost the Democratic primary to an anti-war activist and won reelection as an independent. Gradually, this personal alienation has eaten away at his liberal domestic views. His staff has grown markedly more conservative in recent years, and his closest friends in Congress are now Republicans John McCain and Lindsey Graham.

With Lieberman threatening to deep-six Obama’s top legislative priority, it’s hard to believe that only nine years ago he held second billing on the Democrats’ national ticket. In those days he proudly championed the expansion of government-run health insurance. Now, he’s the scourge of government involvement in health care. The question is, why won’t he acknowledge his shift?