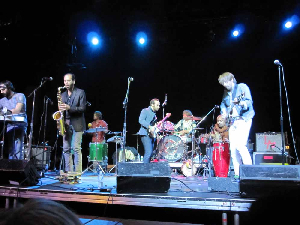 Luke Top went from full-time paralegal to full-time indie rocker practically overnight, crooning his Hebrew lyrics along to the electric guitar melodies and complex African drum beats of Los Angeles-based Fool’s Gold. The “Afro-Hebrew” jam-band just concluded their first US tour three months after the release of their debut self-titled album, and have now returned home after securing a place as America’s new favorite indie-rock sensation. In September a video of “Surprise Hotel” went viral on YouTube, they played CMJ in New York in October, and publications from the Village Voice to the Los Angeles Times have run raving reviews. The American-African rock-fusion idiom is a musical path blazed many a time before by musicians including Paul Simon and Vampire Weekend. So what makes Fool’s Gold worthy of this overnight celebrity?

Perhaps it’s the simplicity of their pop structures, the sincerity with which Top sings his exotic Hebrew, the call and response of the drums, guitars, horns, and vocals; or the band’s ability to mirror the energy they inspire in their twisting-and-shouting audience, grateful for the opportunity to dance. Though the melding of African and American musical traditions is classic, and the practice of opening up songs into long-winded jams is an old cliché, with Hebrew lyrics complimenting distinctly African and Latin influences, Fool’s Gold’s aesthetic is nothing if not unique.

Moved by lofty dreams of free, truthful musical expression, Top and lead guitarist Lewis Pesacov held open jam sessions in which their musician friends were invited to let creativity run wild. Musicians joined and left the collective, playing birthdays and barbeques. After a year, in their closets and living rooms, the band of eight produced a remarkably tight eight-song album. Now that their US tour is complete, the band heads to the UK and France before returning to New York to perform alongside the Mali-based Tuareg group, Tinariwen, one of the band’s stated musical influences. Mother Jones spoke with Top on a rare break for the holidays.

Mother Jones: What were the albums or musicians that interested you as a kid?

Luke Top: Early on my favorite band was Duran Duran. The first album I ever got was Seven and the Ragged Tiger. That was my first memory of being shocked into loving music. Also Adam and the Ants was huge. That record Prince Charming was a huge influence on me as a kid, and in adulthood.

MJ: How did Fool’s Gold come about?

LT: Basically Fool’s Gold is a project started by me and Lewis Pesacov. Essentially the band bore out of our conversations about creating some sort of musical environment where our hidden ideas or influences could come out and not be judged. It was purely for the enjoyment of music.

MJ: If you had to file Fool’s Gold under a genre, what would you call it?

LT: Staff picks? I’m cautious to say world music because I don’t feel like we are world music. We’re an American band with American pop aesthetics in our music. I guess you can put it all under the umbrella of pop because pop seems to fall up a lot these days. I think a really beautiful thing about this band is that people tend to experience us on a visceral level first, and I think the questions of genres come later. I feel pretty blessed to be in that situation because at the end of the day it’s dance music and it’s soulful, and you can feel something and that sort of blurs a lot of questions. We’re using our influences (African, Brazilian, UK, and US pop) in a fluid way, and I think people pick up on that. They know we’re not just cutting these different musical cues for the sake of having them in our music.

MJ: Why sing in Hebrew?

LT: I was born in Israel and spoke Hebrew a little bit at home but the most Hebrew I’ve ever really engaged with is onstage in Fool’s Gold. Hebrew just kind of started pouring out of me… and it just kind of clicked with the music.

MJ: What’s your favorite song on the album?

LT: It’s like having eight children. You can’t favor one over the others or you cause permanent emotional damage to the others. I really love the last song, “Momentary Shelter.” It’s one of the last songs we put together. It’s an amazing thing to not be sick of your songs. You know I’ve been playing these songs over and over again but it becomes more intensified every time. I never want to not play these songs.

MJ: What’s next for Fool’s Gold?

LT: There’s still quite a bit of touring to be done on this album. If I have any time home, which I’m planning on having a little time here and there, I’ll start writing and putting together the ideas for the next album and hopefully get through recording that in the summer, if not the spring. We have a bunch of ideas already just in the earliest stages.I could talk about this band forever because I really love this music. At this point I’m devoting my whole life to it.

LT: My last day of work was a Friday and I left for the tour on the following day; I just got back. So I’m in a whole new reality now.