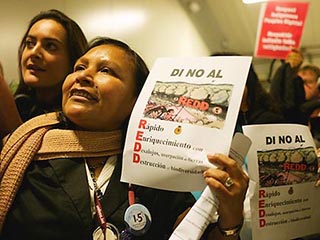 Whose Summit? Our Summit! Bella Center Erupts in Protest (Slideshow)

NGO access to the Bella Center has been all but cut off. Friends of the Earth and Avaaz had their accreditation revoked. Nnimmo Bassey, head of FOE Intl, was ejected from the venue. The day before Climate Justice Action’s Tadzio Müller was arrested preemptively on charges of inciting unrest. This morning marches descended on the Bella Center from locations in central Copenhagen. A bit before noon a group inside the venue began marching outside to meet them. They were turned back at the end of police truncheons.

Will the Biggest Success of COP15 be an Anti-Deforestation Deal?

With expectations getting lowered all over the place, the future of any truly productive results uncertain, and peaceful protests rising up with greater force—and police using force to beat them back—the legacy of the COP15 climate talks is entirely up in the air. Right now, many feel that the most successful results of the talks may come in the form of a finalized, global anti-deforestation deal.

The Five Best States to be an Animal Abuser

The the Animal Legal Defense Fund (ALDF) has just release a new report that looks at the best and worst U.S. states when it comes to the legal protection of animals against abuse and cruelty. The comparative analysis tells us what are the best states, but also, what are the “best states to be an animal abuser” (their words). What are those 5 states?

Brutal Use of Force on Peaceful Climate Protesters Caught on Tape

With plenty of coverage focusing on all the protests and demonstrations going on in Copenhagen, it’s easy to lose track of the fact that the vast, vast majority of these have been peaceful. But, as this video reveals, the Danish Politti aren’t so inclined to take it easy. This pretty brutal use of force was caught on camera, and was employed to push back nonviolent climate protesters.

If you were at last Saturday’s climate change march—what’s being billed as the biggest rally against climate change in history, you would know like much of the rest of the sideline activity in this cozy city, it was mainly about hope, play and compassionate concern. By the time the march ended—with a civil candlelight vigil outside the Bella Center—the greatest violence was registered only in a few broken windows at the foreign ministry. That didn’t matter to the mass media, which jumped at the chance to cast the march in tones borrowed from Seattle or Quebec City. That chance came when hundreds of police in full riot gear surrounded hundreds of demonstrators in a pre-emptive strike that resulted in nearly 1,000 arrests of mainly innocent people, only 4 charges, and an untold number of eye-grabbing photos.

“History shows us the power of peaceful protest,” Nasheed said. “From the civil rights movement, to Gandhi’s Quit India campaign; non-violent protest can create change. Protest worked in the struggle for democracy in the Maldives.” Nasheed is the first democratically elected leader of the Maldives. He continued, “My message to you is to continue the protests. Continue after Copenhagen. Continue despite the odds. And eventually, together, we will reach that crucial number: Three – five – oh.” Here’s the full text of his moving speech.