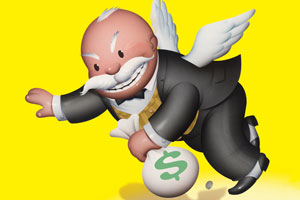 Editors’ note: When this was first published, Americans were seething at Wall Street for crashing the economy, only to emerge from the wreckage with barely a scratch. Nearly two years later, it’s as relevant as ever. For more on how Wall Street has made out like a bandit, see our charts on the executives who profited from the bailout, the true size of the bailout, and how the banks became “too big too fail.”

MAYBE WALL STREET should open a casino right there on the corner of Broad, because these guys simply cannot lose. After kneecapping the global economy, costing millions their homes and livelihoods, and saddling our grandchildren with massive debt—after all that, they’re cashing in their bonuses from 2008. That’s right, 2008—when amid the gnashing of teeth and rending of garments over the $700 billion TARP legislation (a mere 5 percent of a $14 trillion bailout; see “The Real Size of the Bailout“), humiliated banks rolled back executive bonuses. Or so we thought: In fact, those bonuses were simply reconfigured to have a higher proportion of company stock. Those shares weren’t worth so much at the time, as the execs made a point of telling Congress, but that meant they could only go up, and by the time they did, the public (suckers!) would have forgotten the whole exercise. It worked out beautifully: The value of JPMorgan Chase‘s 2008 bonuses has increased 20 percent to $10.5 billion, an average of nearly $6 million for the top 200 execs. Goldman‘s 2008 bonuses are worth $7.8 billion.

And why are bank stocks worth more now? Because of the bailout, of course. Bankers aren’t being rewarded for pulling the economy out of the doldrums. Nope, they’re simply skimming from the trillions we’ve shoveled at them. The house always wins. Indeed, 2009 bonuses are expected to be 30 to 40 percent higher than 2008’s. And don’t forget AIG, which paid the same division that helped cook up collateral debt obligations and credit default swaps “retention bonuses” worth $475 million, in some execs’ cases 36 times their base salaries.

As anyone who watches Dog Whisperer knows, rewarding bad behavior produces more of the same—so it’s no surprise that Wall Street is back to business as usual. Derivatives are still unregulated (thanks, Congress!), exotic sliced-and-diced securities are being resliced and rediced, and the biggest offenders in peddling subprime mortgages? They are raking in millions in federal grants to—wait for it—fix subprime mortgages.

And the worst part? These fat-cat recidivists don’t even have the decency to fake contrition. The New York Times‘ Andrew Ross Sorkin says that whenever he asked Wall Street CEOs “Do you have any remorse? Are you sorry? The answer, almost unequivocally, was no.” When asked by MoJo‘s Stephanie Mencimer if he regretted helping to bring down the economy, former AIG CEO Hank Greenberg said flatly, “No. I think we had a very good record.” Lloyd Blankfein, Goldman Sachs’ CEO (his haul between 2006-2008: $157 million) went so far as to tell the Times of London, “We help companies to grow by helping them to raise capital. It’s a virtuous cycle. We have a social purpose.” Bankers like him are “doing God’s work.”

When asked if he regretted helping to bring down the economy, former AIG CEO Hank Greenberg said flatly, “No. I think we had a very good record.”

This is blasphemy worthy—along with usury—of the 7th circle of hell. And while Goldman’s PR minions, visions of pitchforks dancing in their heads, coaxed Blankfein into coughing up a lame apology, the comment perfectly distilled the Kool-Aid Wall Street has forced down our throats. MoJo‘s Kevin Drum sums it up in his investigation of Wall Street’s outsize influence in Washington: Political payola—$475 million in campaign contributions just in the 2008 cycle—is only part of it. Something more insidious is at work. “Unlike most industries, which everyone recognizes are merely lobbying in their own self-interest, the finance industry successfully convinced everyone that deregulating finance was not only safe, but self-evidently good for the entire economy, Wall Street and Main Street alike,” he writes. Some call this phenomenon “intellectual capture,” he adds, but “considering what’s happened over the past couple of years, we might better call it Stockholm syndrome.”

Sure enough, as our Washington bureau chief David Corn reports, pollsters have been surprised to find that while Americans are angry about the economy, they often blame not the bankers, but politicians—and even themselves. We spent too much, the logic goes, and now we’re reaping the rewards. There’s some validity to that—we all played along as if the good times would never end. But who sold us this crock? Wall Street and its troubadours, from faux regulators like Alan Greenspan to so-called financial journalists like Jim “Mad Dog” Cramer.

And actually, when it comes to restraint and humility, consumers seem to be the only ones learning their lesson. Personal savings are up for the first time in decades; spending is down. Why? Because we, the little people, actually felt the pain of the crash. New incentives, new behavior. Not so on Wall Street; not so in Washington.

It’s not too late. If nothing else, last summer’s tea parties showed that politicians will listen to popular outrage—when it seems to threaten their jobs. What if, as Nobel-winning economist Joe Stiglitz suggests, we foreclosed on bankers and politicians who are morally bankrupt? What if people started showing up at town halls demanding accountability from those who gambled away their jobs and homes? There is plenty of blame to go around. Let’s start putting some of it back where it belongs.