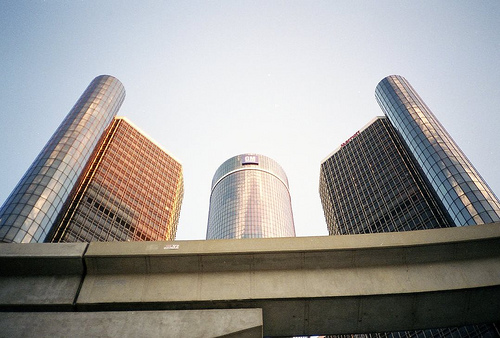 Update: The Senate passed the omnibus spending bill by a 57-35 vote on Sunday, with the dealer arbitration language intact. The National Automobile Dealers Association said in a statement, “The amendment will provide a fair process to address dealer concerns about the recent closures of General Motors and Chrysler dealerships, and will give affected dealers transparency and the right to arbitrate to regain their dealerships.” Mark Reuss, GM’s North American president, called the arbitration language “an opportunity for all of us to make the right decisions and move on.”

Buried way down in the fine print of the Congress’ $1.1 trillion spending bill, passed Thursday by the House, is a lifeline for an endangered species—the American car dealer. A clause inside the the 1,088-page bill would give thousands of General Motors and Chrysler dealerships that have been put on the chopping block the chance to challenge their closure though arbitration. The measure’s supporters say it will put the brakes on the Obama administration’s controversial attempt to resuscitate Detroit by downsizing its dealerships. “Profitable dealers should have never been terminated in the first place, and I was proud to join the fight to have these short-sighted decisions reversed,” said Rep. Chris Van Hollen (D-MD) in a statement last week. “Automobile manufacturers won’t be able to get back on their feet without a strong dealer network, and Congress is committed to ensuring that such a network exists.”

The dealer-arbitration plan is the latest lurch in the push-and-pull between GM, Chrysler, and their dealers, which began earlier this year when the two automakers emerged from bankruptcy proceedings with plans to shutter more than 2,000 auto showrooms nationwide. Backed by the Obama administration’s Auto Task Force, the companies’ executives told Congress that cutting unprofitable or underperforming dealers would trim unnecessary dealers, cut costs, and make their firms more competitive with their domestic and foreign counterparts. Fritz Henderson, the then-president and CEO of GM, said dealer closures could save his company more than $2 billion. Michael J. Robinson, a GM vice president and general counsel, told a House subcommittee in July that the move would allow the surviving dealers “to improve the overall customer experience and retain current customers.”

However, car salespeople and their allies argue that closing dealerships would have the opposite effect, driving away consumers and possibly even killing the automakers. “When you hear [new GM CEO Ed] Whitacre say, ‘Well, we’re going to increase market share,’ and you don’t have as many dealers, you wonder what he’s been drinking or smoking,” says David Cole, chairman of the Center for Automotive Research in Ann Arbor, Michigan. “It just doesn’t compute.”

Jack Fitzgerald, a veteran car salesman who owns domestic and foreign dealerships in Maryland, Pennsylvania, and Florida, is incensed by the proposed cuts. As co-chair of the Committee to Restore Dealer Rights, he’s been a driving force behind two bills in Congress to prohibit dealership cuts (they’ve picked up 287 House and 47 Senate sponsors, respectively). Speaking near his flagship dealership in North Bethesda, Maryland, Fitzgerald says GM and Chrysler executives “just threw everybody under the bus” by targeting dealers in the restructuring process. He ticked off a lengthy list of reasons why cutting dealers won’t fix the automakers’ fundamental problems. GM’s savings estimate from cutting dealers, Fitzgerald states, is a “Big Lie.”

GM and Chrysler have said that their dealers cost them too much. According to GM’s own analysis (PDF), it must pay incentives to dealers, keep cars on the lot fueled up, and fund dealer local advertising—costs that hamper its overall competitiveness and profitability. But critics like Fitzgerald and Democratic Majority Leader Rep. Steny Hoyer (D-MD) take issue with this claim, insisting that dealers actually don’t cost manufacturers much—if anything at all. They note that dealers pay nearly all of the costs of a car right back to the manufacturers, and they actually boost automakers’ bottom lines by, well, selling cars. GM’s projected savings depend not on how many dealers are out there but how many cars it plans to sell. The logic of how GM plans to move more cars with fewer dealers confounds Fitzgerald. “The only people who think cutting dealers made any sense are people don’t know anything about this business,” he says.

But sales may be secondary. As Fitzgerald sees it, a dealer’s principal purpose is servicing cars already on the road and offering good service to convince customers to buy another car from the same brand. Despite their dwindling market share, American models still outnumber imported models on the road by an almost two-to-one ratio, with about 150 million US models and 87 million foreign cars. After GM and Chrysler’s proposed dealer cuts, there would be around 9,500 domestic car dealers, compared with nearly 10,000 foreign car dealers. Fitzgerald predicts that drastically cutting the number of dealers would ensure long waits for poor service. That, he says, “will put in motion a process that will lead some brands to fail, putting the billions of taxpayer dollars invested in the two companies at great risk.”

GM spokesman Greg Martin says that trimming the company’s fleet of dealers remains essential for its return to profitability. Martin says GM currently pays subsidies to its dealers that competitors such as Toyota and Honda do not. “If we have a strong dealer network,” he says, the remaining dealers “don’t need us to augment their business.” He pointed to GM’s steadily increasing market share since emerging from bankruptcy in July as proof of the wisdom of its restructuring plan. (In contrast, Chrysler’s sales have plummeted 38 percent after closing nearly 800 dealers this year.) “We’re still going to have the largest dealer network,” Martin says. “We’re going to make sure our service network is covered.”

Supporters of the dealer-arbitration clause in the new spending bill say it is the best bet for preventing GM and Chrysler’s collapse—and saving jobs. Fitzgerald estimates that 169,000 jobs are at risk if all the dealer cuts go through. Many of those jobs are in economically hard-hit regions in the middle of the country, where most American cars and dealers are located, according to data from the automotive research firm RL Polk & Co. Fitzgerald thinks many dealers could claw their way back into business through arbitration, and credits Congress for giving them at least a fighting shot. “This was not easy for [Congress] to do, because the Task Force has the cover of the White House,” he says. “Obama doesn’t have any idea what’s going on here. He’s trying to put people to work and these people are putting 169,000 jobs at risk.”

In the end, Fitzgerald says, the future success of Chrysler and General Motors will come down to one thing: Making cars that consumers want to buy. Or as the employees at his dealership often quip, “It’s the product, stupid.”