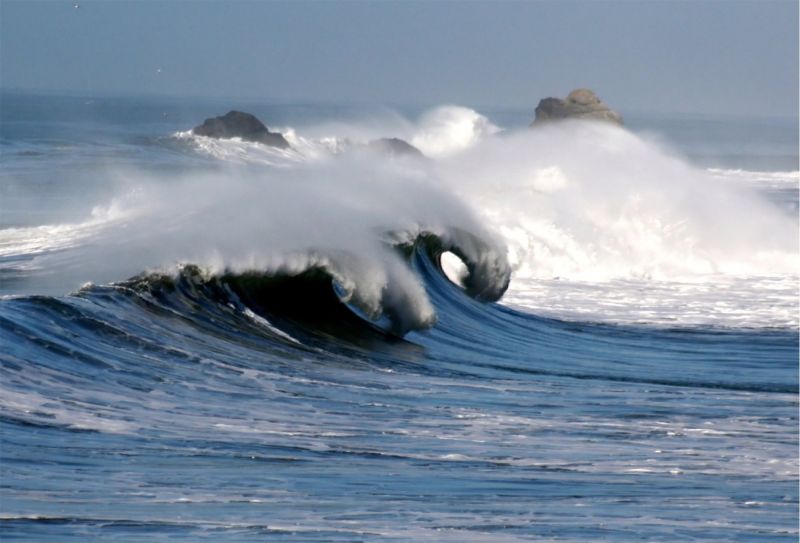 The biggest waves in the Pacific Northwest are getting bigger. So are the smaller waves.

A new assessment of offshore data from Oregon and Washington finds the annual average heights of deep-water waves have increased since the mid-1970s—with both the low waves of summer and the highest storms waves of winter growing yearly.

Consequently the 100 year wave for this region just grew form a 33-foot wave to a 46-foot wave: a 40 percent rise. Furthermore, the really highest waves possible in the 100-year-event cycle are likely to rise above 55 feet, according to research published in Coastal Engineering.

Worse, the impacts of these storm waves will dwarf the impacts expected from sea level rise in coming decades.

I wrote about this phenomenon in MoJo’s All the Disappearing Islands in regards to the people of the Pacific islands nation of Tuvalu. Long before they’re actually drowned, low-lying islands and coastlines will become uninhabitable from periodic inundation by storm waves.

In the Pacific Northwest, increasing wave heights have already wrought three times more havoc from erosion, flooding, and coastal damage than is expected from sea level rise in the next few decades.

Add sea level rise to growing wave heights you get a seriously accelerated impact on coastlines.

The most likely cause? Global climate change, say the researchers—who note similarly rising wave heights in the North Atlantic, plus a rising in the total power generated by hurricanes yearly.

So for those who think a 1.5-degree F global temperature rise is inconsequential, here are a few of the deadly inconsequences.