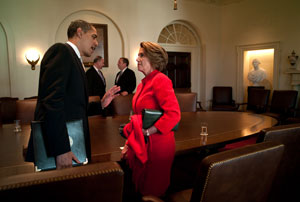 Can health care reform be resuscitated? For weeks, it appeared that a stalemate over abortion politics could prevent the Democrats’ historic health care overhaul from becoming law. But according to House Speaker Nancy Pelosi, while there are potential hurdles that could yet sink the effort, abortion’s not the big deal breaker that ought to worry supporters of reform.

The Democrats’ strategy, Pelosi told several columnists on Wednesday afternoon, hinges on getting the House to approve the Senate’s health care bill—while the Senate modifies its version through a procedure called reconciliation in order to address House Democrats’ objections to certain provisions of the Senate bill. Pelosi said there is “very little support in the House” for passing the Senate’s measure untouched. But if the Senate makes changes via a a separate reconciliation measure—which would require only a majority and can’t be defeated by a filibuster—then, Pelosi said, she is confident “we can come up with something.”

So, now House Democrats are weighing which aspects of the Senate’s legislation they can live with and which provisions they will insist that the Senate alter to secure their votes. Pelosi said her caucus is most concerned with what she called “the pillars” of reform: the design of the health insurance exchange, the excise tax on so-called Cadillac health care plans, affordability for the middle class, and accountability for insurance companies.

Pelosi emphasized repeatedly that the Senate’s excise tax on high-end plans has “little support” in her caucus. She said her members don’t even like the compromise deal the AFL-CIO cut with the White House that would exempt preexisting union contracts from the excise tax until 2018. Significantly, however, she did not include abortion on this list of potential deal killers. “[Abortion is] not a subject of our conversations at this time,” she said.

This might come as a surprise, because in recent days it has seemed as if abortion politics could sink the Democrats’ last, best chance for passing a bill. Rep. Bart Stupak (D-Mich.) claims he leads a bloc of anti-abortion House Democrats who won’t vote for the Senate’s legislation unless changes are made to tighten its abortion restrictions. Meanwhile, Senate Majority Leader Harry Reid’s office told Mother Jones that procedural rules prevent the Senate from meeting Stupak’s demands. That’s because only provisions that affect the budget—and the Senate’s abortion language does not—can be addressed in reconciliation legislation. Nevertheless, Stupak is standing his ground, insisting that he has 10 or 11 Democrats who voted for the House bill but who won’t vote for the Senate bill if the abortion language remains intact.

So why isn’t Pelosi panicking about abortion? The fact that the issue doesn’t make her list of major roadblocks suggests that House leadership either thinks Stupak is overstating the votes he has in hand, or it believes it can convince enough progressives or Blue Dogs who initially voted against reform to switch sides.

As of yet, Stupak hasn’t named the lawmakers who he claims to be in his pocket. “I just don’t know anyone who thinks that Stupak controls a solid block of 10 or 11 votes that he can shift at will,” one House aide says.

It’s possible that Pelosi and her allies are underestimating the extent of Stupak’s support. After all, many pro-choice Democrats didn’t think Stupak would be able to force a floor vote to add his controversial abortion coverage restrictions to the House health care bill. But he did. Still, until Stupak’s allies show their faces, their votes cannot be counted. Health care reform may be in critical condition, but it’s not dead yet.