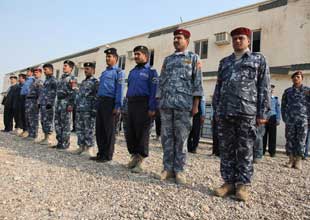 In October 2007, Stuart Bowen, the Special Inspector General for Iraq Reconstruction (SIGIR), was forced to temporarily call off an audit of a billion-dollar contract to train Iraq’s troubled police force. The problem was there wasn’t much to audit. Invoices and other supporting documentation were missing or error-riddled—in such “disarray,” as Bowen put it, that it was impossible for his office to render any definitive judgment. His staff could only conclude [PDF] than the State Department division overseeing the contract simply had no idea what it had received in return for most of the $1.2 billion it had paid out to the contractor, DynCorp International.

More than two years later the main thing that has changed is the amount of money the government can’t fully account for. In a new audit [PDF] released Monday, SIGIR concludes that the State Department’s Bureau of International Narcotics and Law Enforcement Affairs (INL) “continues to exhibit weak oversight” of DynCorp’s work under the police training program. “As a result, over $2.5 billion in US funds are vulnerable to waste and fraud.”

The INL oversees efforts to train civilian police forces in conflict zones around the world—along with Afghanistan and Iraq, in places including Sudan, Haiti, and the West Bank. Since at least 2005, the State Department division has been criticized repeatedly by SIGIR and the agency’s Inspector General for jeopardizing taxpayer dollars though its poor oversight practices, particularly in Iraq.

Between 2004 and early 2007, INL had only one contracting officer in Iraq overseeing DynCorp’s training contracts. That staffer, according to SIGIR, “did little to no validation of invoices”—meaning that INL had no assurances that the government wasn’t being overbilled, but paid the contractor anyway. This particular lapse has forced INL to revisit all of DynCorp’s invoices through October 2006, a process that’s estimated to take at least 3 to 5 years and a require a dedicated staff of 11. SIGIR reports that this task has been set back by “high error rates on invoices and poor or missing support documentation”—including, for example, thousands of timesheets that had not been signed off on by DynCorp supervisors.

In the past, INL officials have acknowledged shortcomings and promised to improve oversight in Iraq, but according to the audit “INL has fallen short on those initiatives.” According to SIGIR’s report, INL has dispatched additional contracting personnel to Iraq, but this still hasn’t prevented taxpayer dollars from being squandered. For instance, auditors found that since December 2006 INL has been paying to lease two generators used by DynCorp at a camp in Erbil at a cost of $450,000. Yet the government was initially offered the opportunity to buy the generators outright for $78,000—and, worse still, INL had generators in stock in the first place and had no need to lease or buy any additional ones. SIGIR’s audit also questions whether INL has been paying inflated prices for housing and land used by DynCorp personnel. Under one lease deal, INL agreed to pay $31.30 per square foot to rent land in Baghdad’s Green Zone—for a total of nearly $750,000—that should have cost under $5 per square foot. In another case, INL paid more than $50,000 a month to furnish utilities and provide security for containerized housing units at Baghdad’s Camp Victory—a dubious outlay, according to SIGIR, given that the cost of security should have been minimal since it was provided by low-paid third country nationals and the area in question “is within the confines of other secure areas.” SIGIR reports:

When we questioned an ICOR as to why he did not review the cost of the lease, he stated that the lease was in effect before he arrived in Iraq. When asked as to why he had not questioned the costs, he had no response. Furthermore, DynCorp did not respond to our requests for details concerning the $53,400 monthly costs.

In a letter to Bowen, David Johnson, who heads the INL, said his office “has made substantial improvements” and agreed with many of the recommendations in the audit (including performing a comprehensive review of the INL division that manages the Iraq program). But he took issue with one of SIGIR’s findings. Johnson said the claim that his office had left more than $2.5 billion at risk of fraud or waste was “inaccurate” and “unfounded.” SIGIR, however, “maintains its position.”