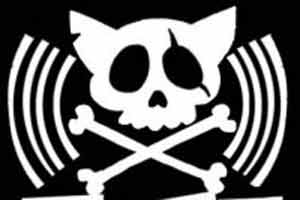 “Abbracadabra means I create as I say,” declares 30-year-old Abby Rubinson, who DJ’s at San Francisco’s Pirate Cat Radio under said name. For two hours every Monday morning, Rubinson—an out-of-work lawyer—interviews people “creating as they say, play, or otherwise do as they do,” then splices these often politically charged segments with doses of indie, shoegaze, Brit-pop, and Brazilian Tropicalia fare. Even though all 70 Pirate Cat DJs are asked to incorporate interviews into their shows, it is Rubinson’s assorted cast of local and political movers and shakers that offers a ripe picture of the substance behind the Pirate Cat hype. (Listen here.) While visiting the station recently to chat with Pirate Cat’s founder, I also took the time to sit down with Rubinson and Music Director Katherine Kirby (a.k.a. DJ Canary Turd; listen here), who offered their own insights into the unlicensed station’s FCC troubles and how complying with the rules could water down the eccentricities of a local cultural hub.

Mother Jones: How’s your show different from others?

Abby Rubinson: The show after me, “A Shot in the Arm,” is all news-based. That DJ’s name is Gino Giovelli. He and I have some of the same interests—like he’s covered a lot of the oil stuff too, but he’ll do it through maybe broadcasting some Democracy Now or sometimes having somebody come and talk. But I’ll try to pick music that goes along with my theme. With mine, there will be an interview that bases the show. So far it’s been more about activism, but there has been some local music and there’ll be more, and there’ll be San Francisco-based chocolate makers, bakers and chefs, and probably some jewelry makers and bag makers and whatever creativity I can think of.

MJ: Do you think your show has had any political impact?

AR: The kinds of things I normally address are problems with oil companies in the Niger Delta. I interview lawyers or people from Nigeria, victims of torture, or family members of people who have been killed, and they’re talking about the struggle on the air. I’m hoping that people listen and then maybe will decide to try to think about where they buy their gas, or mention it to somebody that they see later that day. But to think that Chevron or Shell executives listen to my radio show and say, “You know what? We were complicit in torture and so-and-so’s execution, and we really should pay people in Nigeria for all the harm we’ve caused them.” I wish it were that easy.

MJ: Do you see yourself as being part of a larger movement?

AR: It’s not like we have to indoctrinate ourselves when we decide to be Pirate Cat Radio DJs. I think on some level if you want to have a show there then you’re well aware of the huge contrast between our radio station and the corporate ones. I think that is part of it. I want to make sure people know that they don’t have to just flip through those one-o-whatever-it-is radio stations and just listen to the same stuff over and over again. I like to be able to provide people with good alternatives, so if there’s something else out there I do want to be part of that movement that enables it to exist and challenge the corporate status quo.

MJ: So you don’t play Rihanna?

AR: [Laughs.] You could. I think that if somebody’s show started sounding like anything you could hear on another station, it would be surprising to the other DJs. I don’t think anybody’s ever been kicked off for playing the wrong kind of music. Maybe there’d be some song that’s just so great that I have heard on another radio station and I think it’s fun and I want to play it, but for the hours I’m on the air I would definitely try to play stuff that you wouldn’t hear elsewhere. And it’s really gratifying when you get people calling in saying, “Who is this? I’ve never heard this before. Now I want to buy that and I wouldn’t have known about it if I hadn’t listened to Pirate Cat Radio.” I think it’s great. It’s like a little bit of education.

MJ: Why even fight for broadcast rights when everything has gone  digital?

AR: When Monkey started this radio station on his own and broadcast it through this loophole (see Monkey Man interview), I’m pretty sure he was frustrated by the Clear Channel-type corporate media and wanted to have an alternative to that, and so that’s where Pirate Cat came from. Sure, you can do that online; I think it’s more just preserving the origins of Pirate Cat. We’re still going to keep doing what we’re doing. Even though we’re not on 87.9, we’re still broadcasting. Come to the station, you can see us. Go online and you can hear us on the same station. But I think the FM part of it is still traditional radio, and what we were challenging directly, I think, is those other radio stations that are just further on the right of the dial that just don’t provide the public with what they need.

MJ: Can you give me an example of music you have played to fit one of your themes.

MJ: Some people say that Pirate Cat Radio’s popularity would wane if it wasn’t an illegal operation.

KK: I think what people like about Pirate Cat Radio is that we are providing a service that they cannot find otherwise. We are playing music that other people don’t play. We are interviewing people that other people won’t interview. We think things are relevant—like local farmers markets, the taco truck down the street. That matters to us. This is our neighborhood. These are our politics and our ideas. It’s not so much that we’re illegal and we’re being a badass somewhere. It’s more that we are giving exposure to things that other people are not giving exposure to, but that people do care about.

MJ: If you did have a license, how do you think that would change the station’s format?

KK: I think we would have to be a little bit more aware of what we’re saying on the air and what we’re playing at certain times. But in terms of the overall feel of the station, we would never tell the DJs you have to play Top 40 hits. I don’t think any of the DJs would stick around if we told them to do that.

MJ: So censorship would apply?

KK: A little bit, but not censorship of ideas necessarily. You wouldn’t be able to say swear words, which we shouldn’t do anyway because it’s lazy and it’s kind of unnecessary. We would still let our DJs interview people that they want to interview. The thing with the license is that the radio stations right now are set up to make money, their set up to turn profit, to have commercials, to be a business. We don’t want to be a business like that. We want to cover the issues that we think are important. We don’t want to have commercials and make money off of it which is why it costs so much to get a license right now. If you look at all of the stations out there, they prerecord what they’re gonna air. They pick the top 10 hits and they just play those over and over until people actually start to like them. That’s not what we want to do here, and that’s what the licenses are for is to keep that status quo going. And that’s not us.