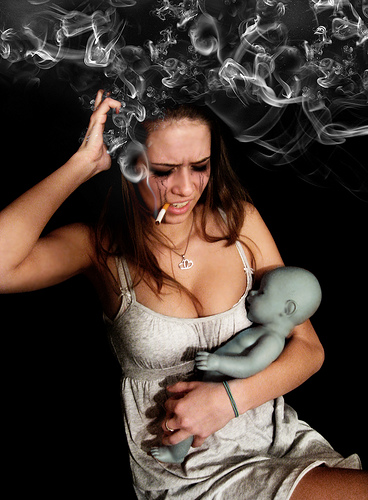 I love a good morality play, and I’m always excited to see what new punishments Lifetime has dreamed up for the unchaste, the immodest, and the otherwise astray in its made-for-TV movies. So when I sat down to watch The Pregnancy Pact (just the latest in a rash of paranoid programming that includes The Secret Life of the American Teenager and Mom at Sixteen—pregnancy suit manufacturers must be doing a very brisk trade lately) I expected high moral camp: fire and brimstone on the Eastern Seaboard, pregnant adolescents raked over the coals and tried as witches, mentholated cigarettes and juicy Judeo-Christian retribution.

I must have forgotten that made-for-TV movies on Lifetime tend to be blandly judgmental rolls in the hay masquerading as objective two-hour Public Service Announcements. The whole affair turned out to be a boring festival of flim-flam that uses media reports of an alleged 2008 teen pregnancy pact in Gloucester, Massachusetts for its own drab, moralistic puppet show.

The horror begins immediately with a series of shots featuring high school kids canoodling around campus, their make-out sessions clearly indicative of a raging teenage sex epidemic. Before long, we’re introduced to our protagonista, a 15 year-old naïf named Sara (Madisen Beaty) who’s friends with a group of girls from the wrong side of the abstinence tracks. Sara soon finds herself drawn into a pro-abstinence league’s worst nightmare when she comes to believe—thanks in part to a generous serving of pregnant peer pressure—that getting knocked up by her slightly older boyfriend will keep him from moving away after he graduates.

Meanwhile, a woman named Sidney (Thora Birch) who blogs about teen issues returns to Gloucester to investigate the reported pregnancy spike at her former high school. The mainstream media soon smells the blood of teenage sin, and before long, it’s having one of those frenzies it’s so famous for (the movie incorporates real news footage of Anderson Cooper). The formerly sleepy fishing village must then weather the ensuing perfect storm of cameras and digital recorders. (“Can we just get a video of her stomach?” cries one anonymous TV journalist as the press swarms around the girls). Though no evidence of an actual “pact” ever emerged in the news, Lifetime finds that inconvenient story-wise, so Sidney discovers that the teens really did swear to all get pregnant together. (To be fair, the movie is “inspired by” true events, which can mean anything.) Though she promises to keep it a secret, Sara’s mother finds out. I’ll spare you the administrative details, but in the end, a compromise is reached between the shame-mongering, abstinence-promoting idealogues and their sex-crazed, condom-slinging city slicker counterparts.

The Pregnancy Pact is a treacly morality tale fixated not so much on pregnancy as it is on pride. (After all, it’s easier to moralize about a cardinal sin than it is about a biological condition, which is really just handy evidence in a never-ending Judeo-Christian judgment before a jury of your peers.) The girls who have the nerve to flaunt their condition, smoking cigarettes and saying things like “I thought you’d be kind of pumped about being a grandmother!” and “So this is what it feels like to be Jamie Lynn Spears!” get punished for their hubris, suffering, in one instance, near-fatal premature labor. Sara, who had the good sense never to fly too close to the blistering sun of vapid celebrity emulation, nevertheless undergoes a series of tests as her boyfriend shuns her, her family blames and harangues her, and she almost, in her grief, gives herself alcohol poisoning at a party.

In the end, Sara has the humility to decide she must act like an adult and take responsibility for her actions. Though her life as a young single mother won’t necessarily be a picnic, we walk away confident that at least it won’t be a picnic in hell. The young whippersnapper gets a big ice cream sundae of redemption with a baby on top, and the credits roll us right back onto the path of righteousness.

The Pregnancy Pact airs again on Lifetime this Thursday, January 28 at 7PM ET/PT.