The term “mustang” is derived from the Spanish word mestengo, or “stray animal,” and is used to describe any type of feral horse. Spaniards brought horses to the continent in the 1500s, and by the end of the 19th century there were 2 million mustangs scattered throughout North America. In 1971, Congress passed the Wild Free-Roaming Horses and Burros Act, which mandated that the Department of Interior protect the mustangs “from capture, branding, harassment, or death” and designated them as “living symbols of the historic and pioneer spirit of the West.” 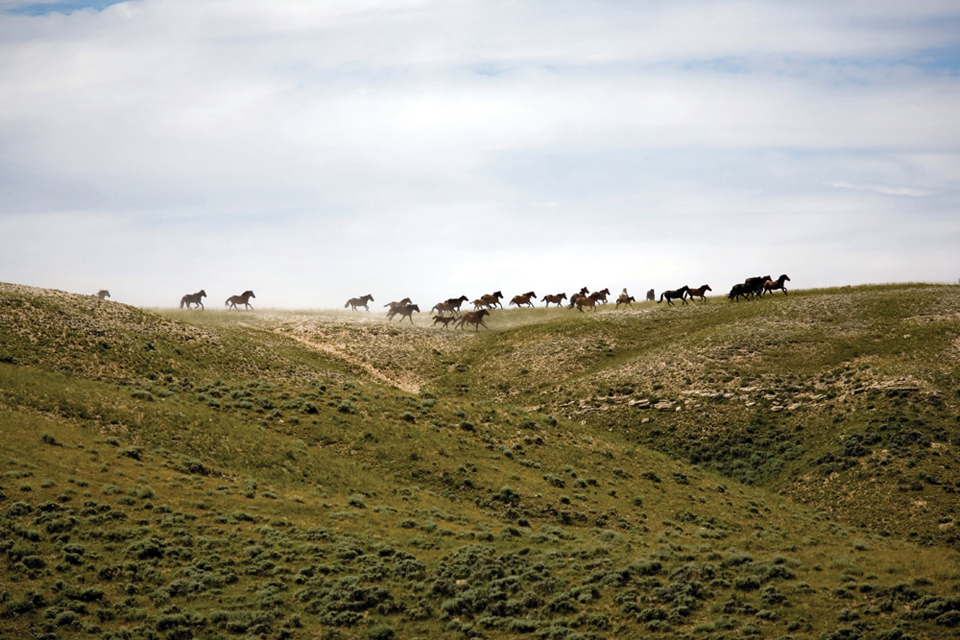 The BLM rounds up “excess” mustangs to ensure a static population on its herd management areas, which are spread out over 10 Western states. Today, the BLM cares for 32,000 captive mustangs at a cost of $29 million annually.

The BLM estimates the total number of wild mustangs is roughly equal to the number in captivity. As the mustang habitat shrinks, the BLM must gather and board an increasing number each year. Officials want to winnow wild mustangs to a fixed population of 26,600. “We’re way over that number,” says Alan Shepherd, who manages the wild-horse program for the BLM in Nevada. 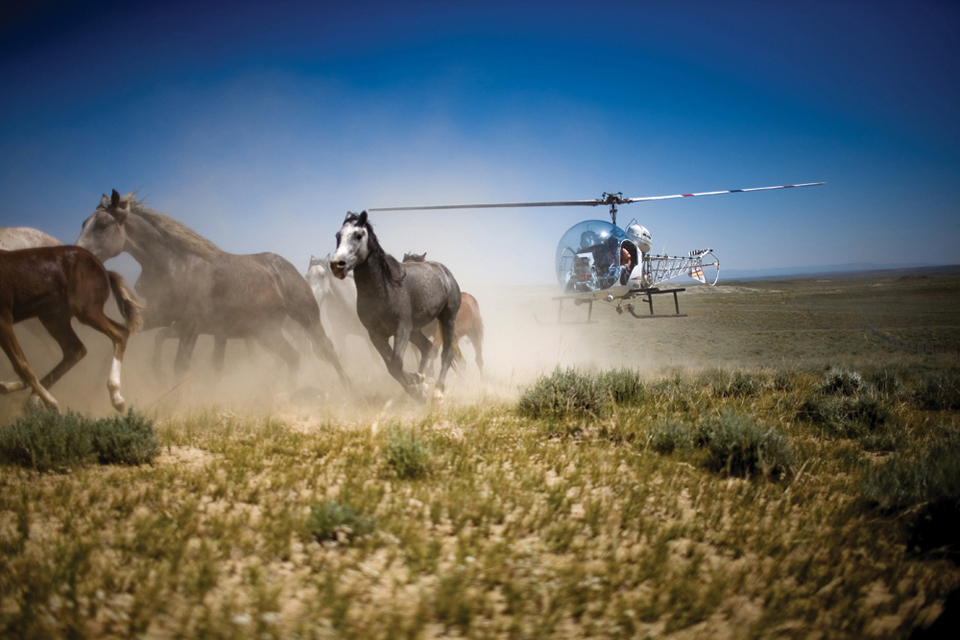 A low-flying helicopter drives a herd into a netted chute. 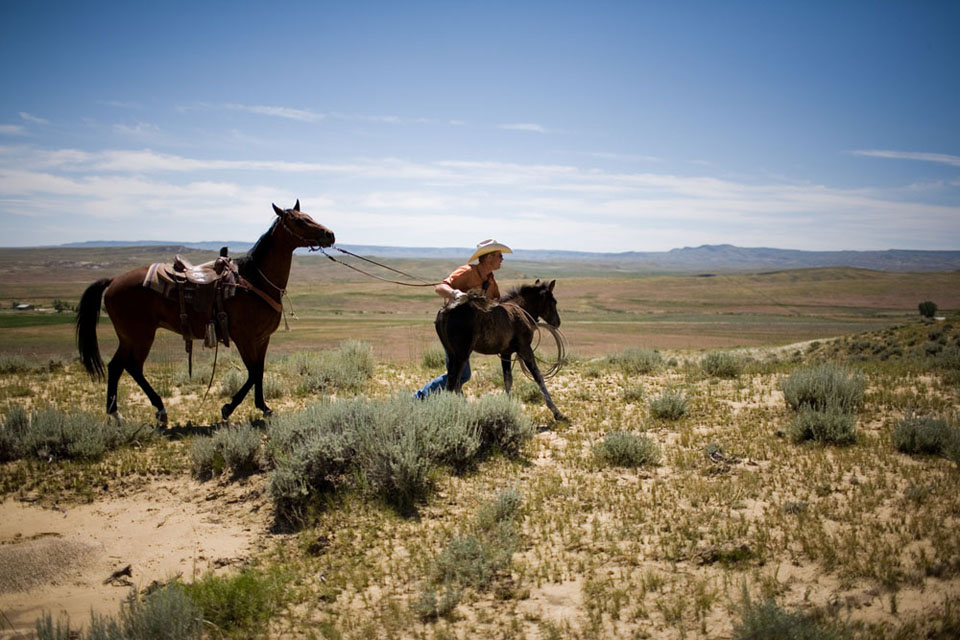 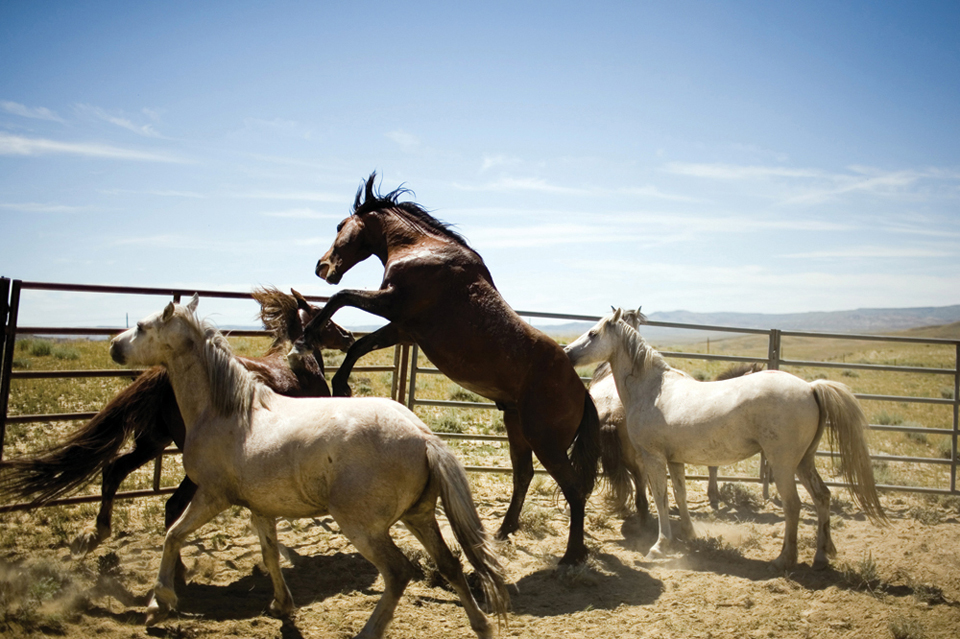 Euthanizing mustangs is banned under the Wild Free-Roaming Horses and Burros Act. But an amendment authored by Sen. Conrad Burns (R-Mont.) and passed in 2004 permits the BLM to sell mustangs at livestock auctions. Purchased mustangs are sometimes trucked to slaughterhouses in Mexico, one of the world’s leading horsemeat suppliers.

The alternative to slaughter is to put mustangs up for adoption. But few will take home a feral animal that will kick, bite, or trample anyone who gets near it. 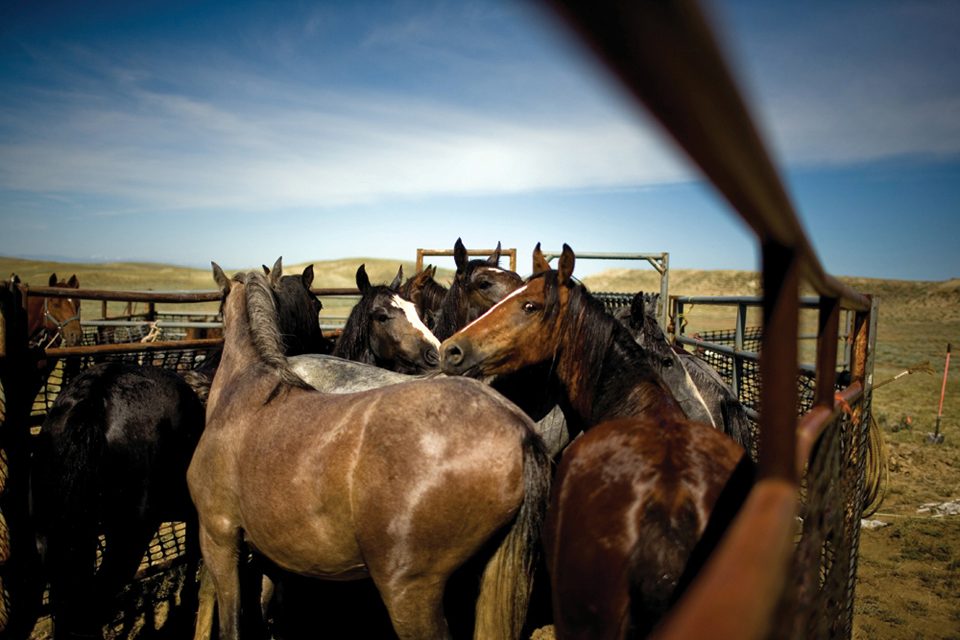 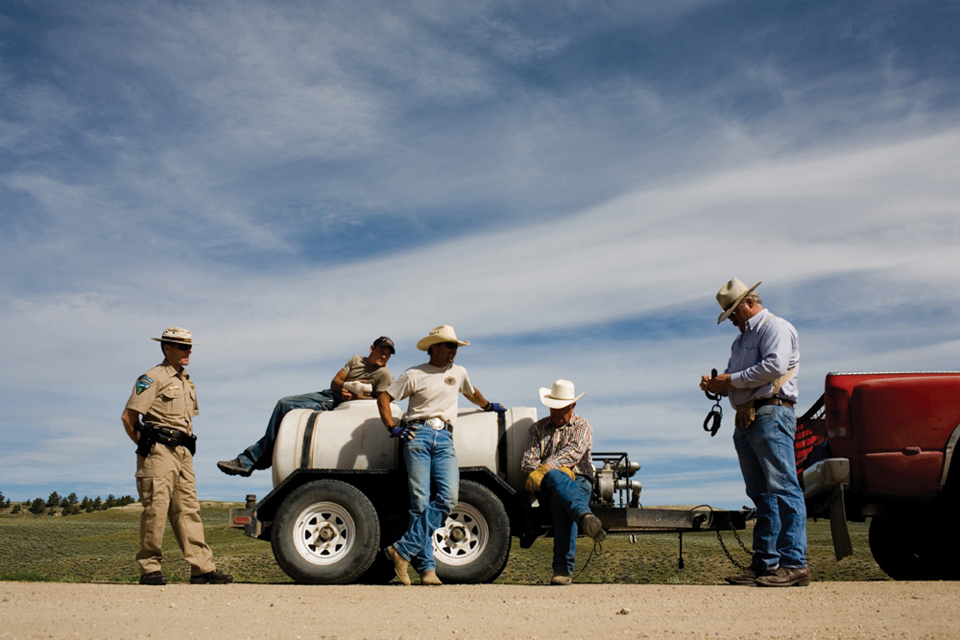 BLM employees and livestock workers wait for word that a site for holding captured horses has been approved. 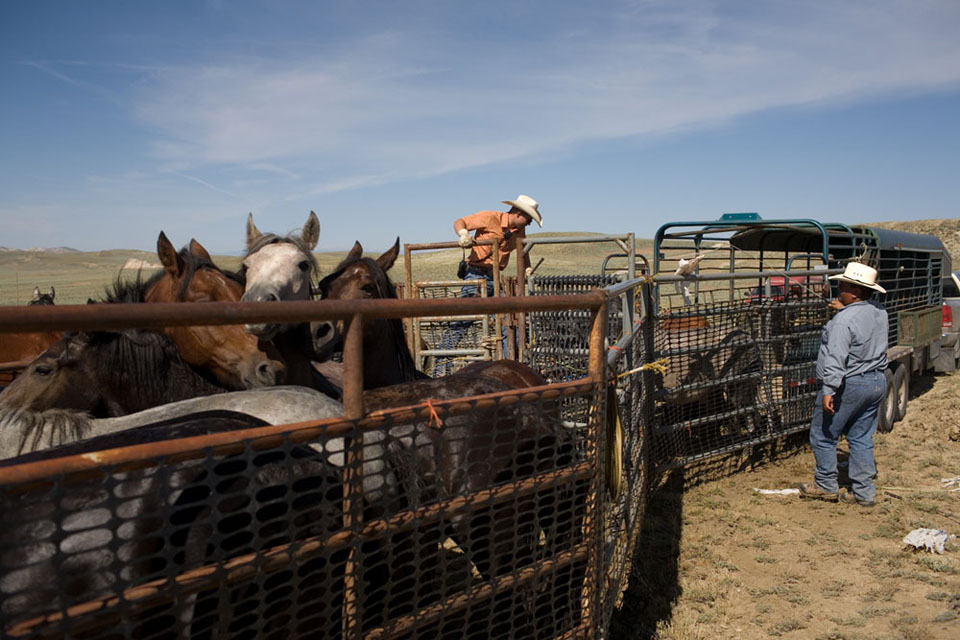 After wild mustangs are caught by the BLM, they are penned, sexed, and sorted. Young animals are sent for further testing before being put into the adoption circuit. Older horses are released.

At the Wyoming State Honor Farm, convicts train, or “gentle,” wild horses that have been rounded up from the high Plains. If the gentling goes smoothly, a mustang will be tame enough to saddle, mount, and ride in three months. “Not a bad place to be in prison,” says Joe Crofts, below, who manages the farm. 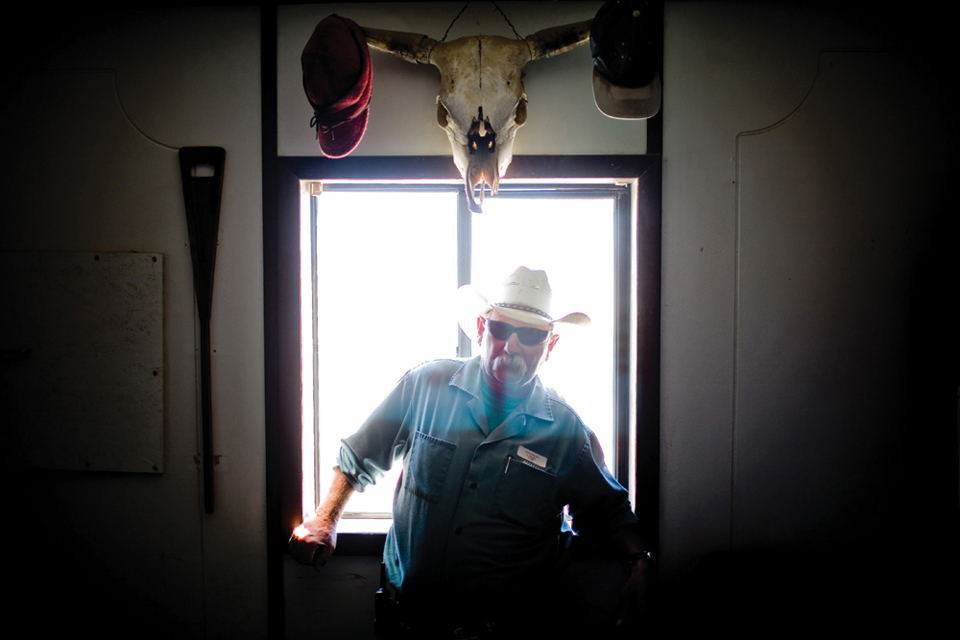 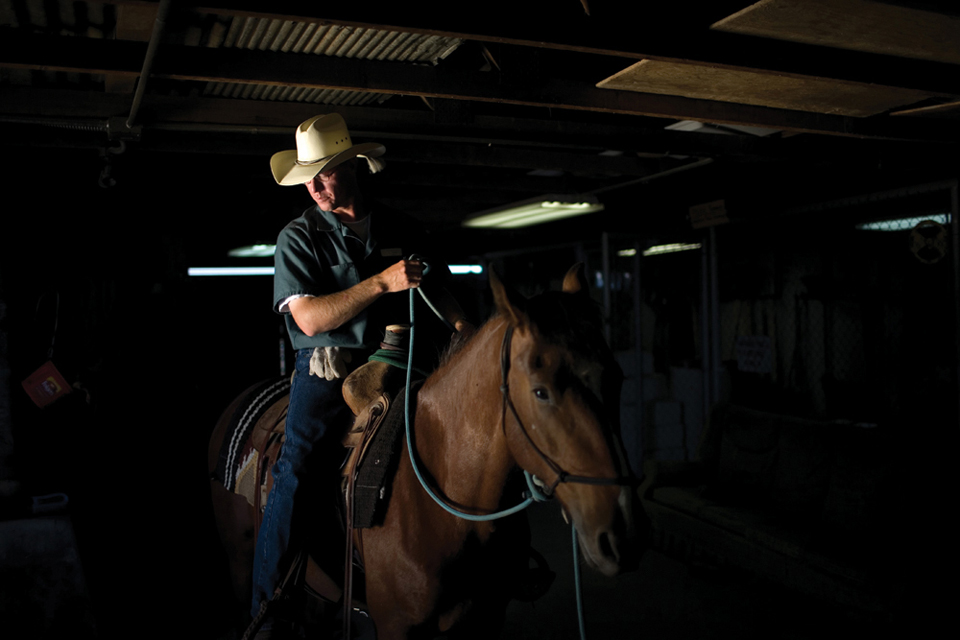 Well-behaved inmates like Leland Yung, above, can transfer from the state penitentiary to the Honor Farm. “These horses know when you are mad or angry or frustrated before you do, so paying attention to them has helped me better understand when I’m getting frustrated,” he says. “If you really want to learn about yourself, this is the way to go.”

“Once in a while an inmate gets bucked off, rammed into a fence, bit, or kicked in the leg—that’s educational for the guy,” says Jeff Martin, below, who supervises the program. 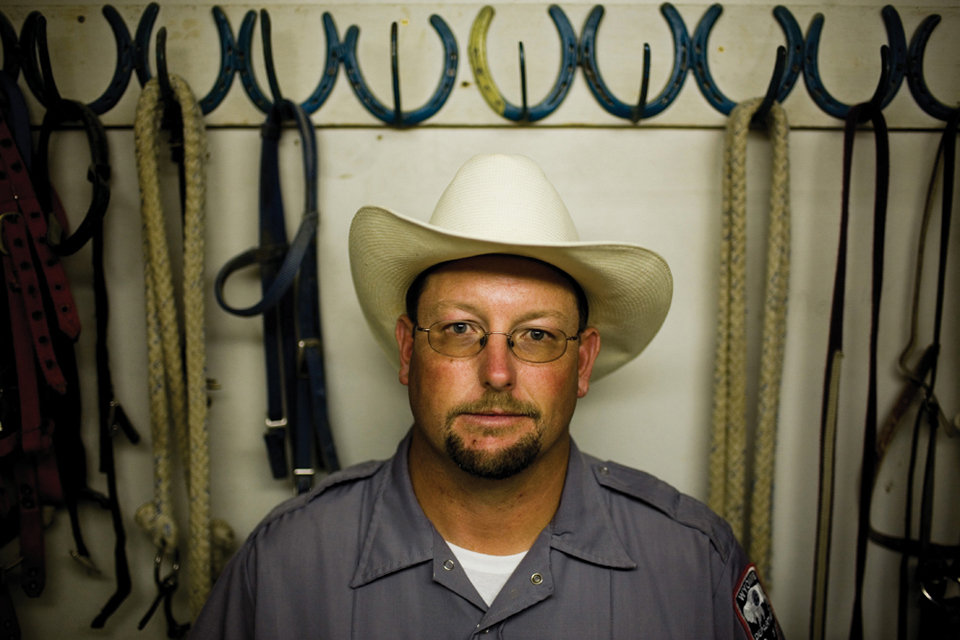 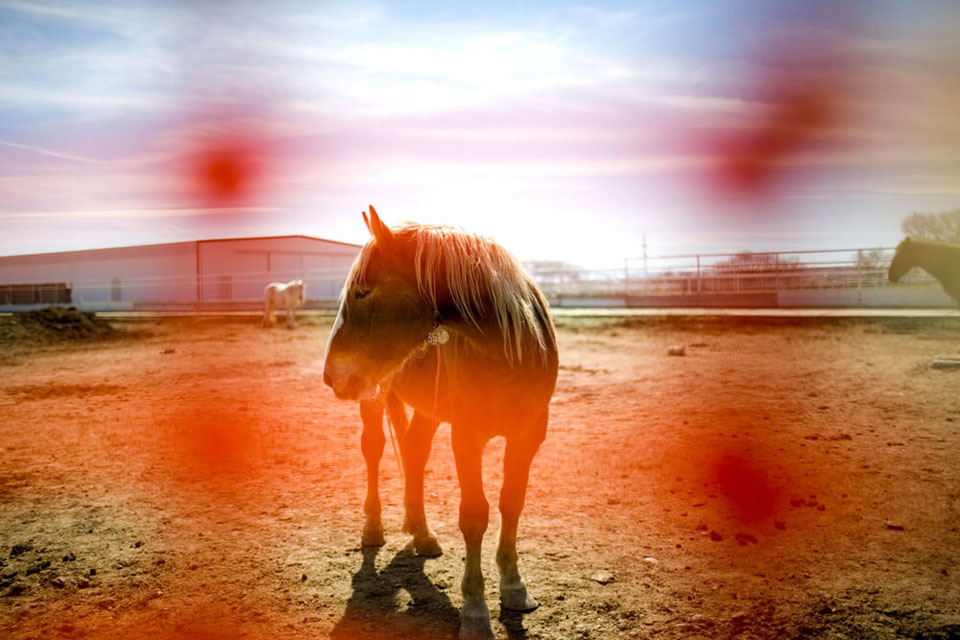 A mustang stands in a holding pen on the Wyoming Honor Farm’s Horse Hill, where there can be as many as 245 horses in training.

Taming a wild horse used to mean breaking its spirit. You chased it into a pen, forced a halter on it, and snubbed it to a fence, then mounted up and rode until the horse either submitted or bucked you off, at which point you’d repeat the process. Gentling, today’s preferred method, involves a sequence of desensitization maneuvers that lets the horse establish trust with the trainer on its own terms. “It creates an excellent bond between inmates and horses,” says Crofts. 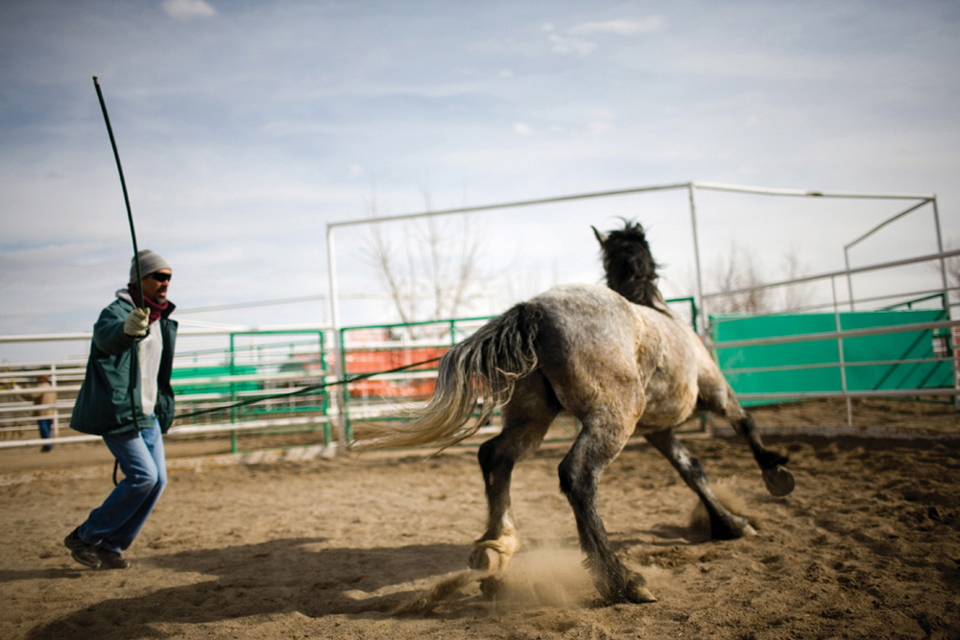 Inmate Kelly Smith works with a horse that recently accepted a halter. 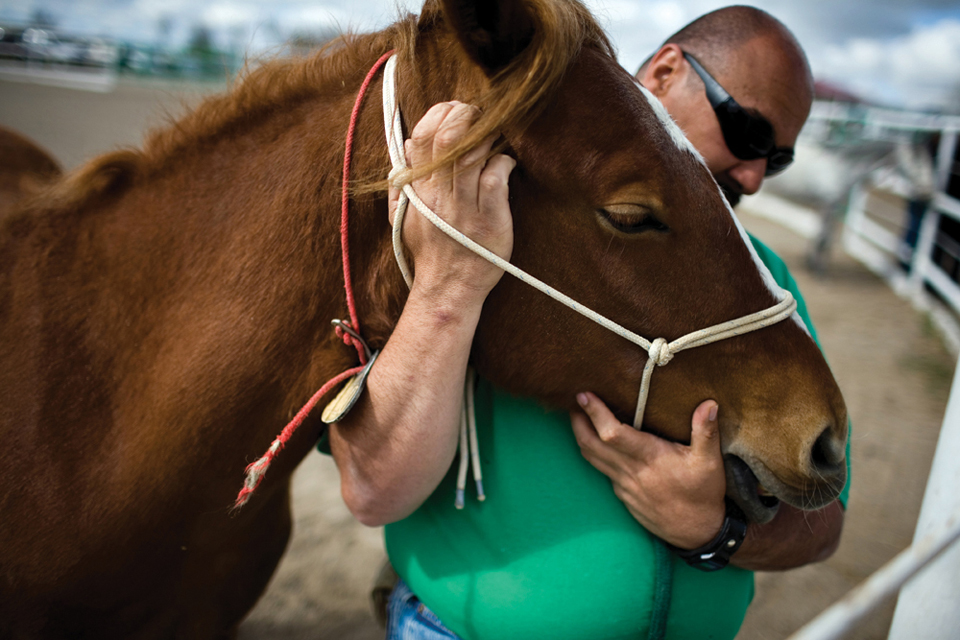 Inmate Joe Vasquez hugs one of the horses he works with prior to the Wyoming Honor Farm’s semi-annual horse adoption.

Since 1988, when the Wyoming farm started taking its first horses, about 900 inmates have gentled 3,600 mustangs there. For each horse gentled, the BLM pays $3 per day. The farm, in turn, gets a minimum $125 adoption fee when it finds a horse a new home, though auctions can drive up the price.

“When I first came here I was terrified of the horses,” says one Honor Farm inmate. “I was scared to get in the pens. I would be shaking. But you have to trust in your ability to be around the horses. It’s all about building trust—not only with the horse but with yourself.” 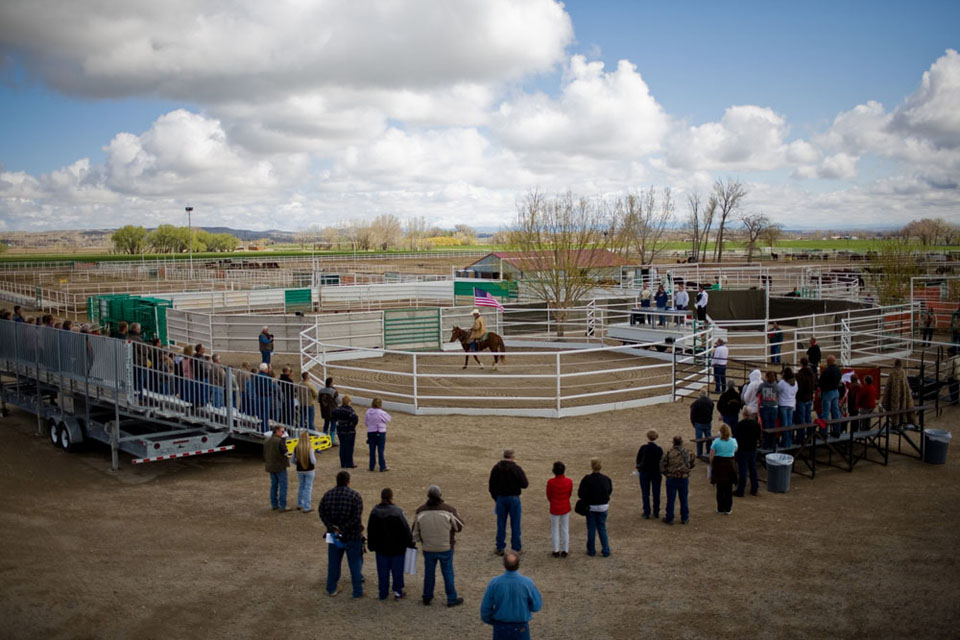 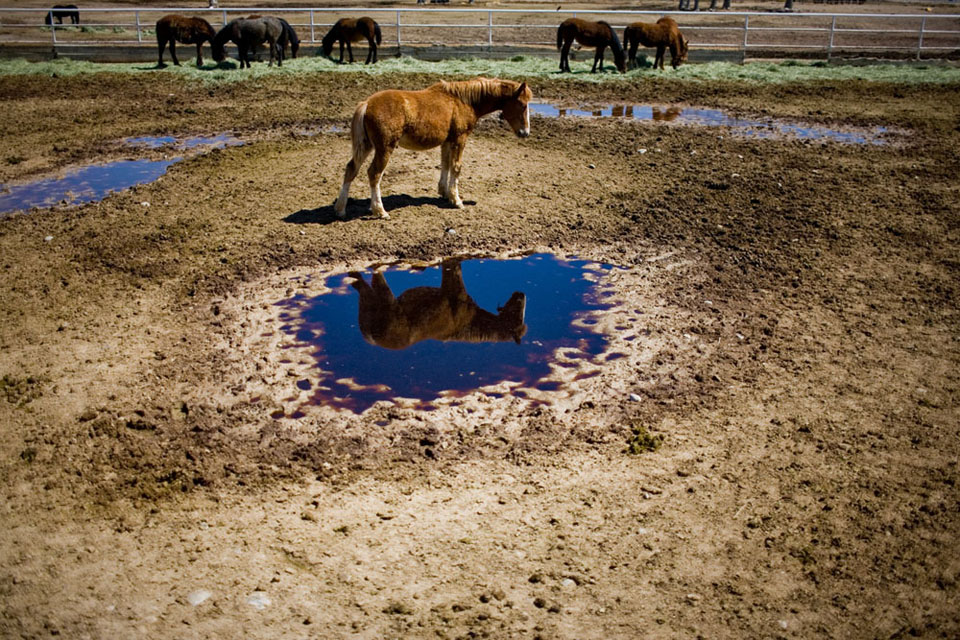 Below, inmate John Shuck, Horse Hill’s “lead man,” begins another day of work. A plaque mounted at the entrance to the Honor Farm explains, “There’s nothing better for the inside of a man than the outside of a horse.” 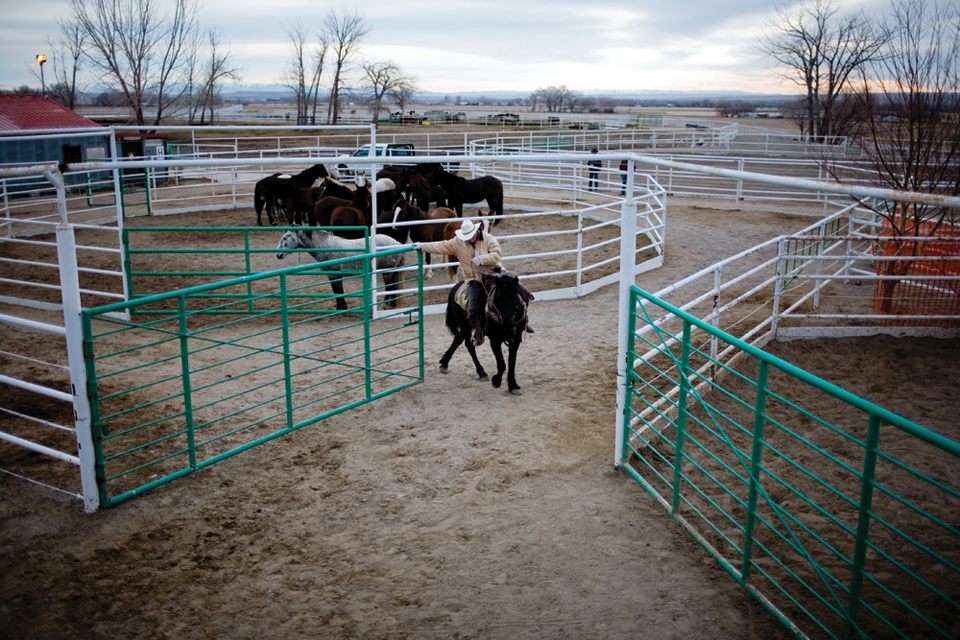 Read a piece about the annual BLM roundup and the prison program here.