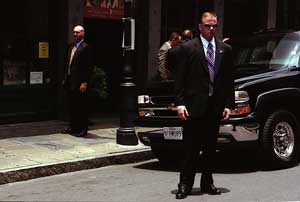 Over the past year, Secret Service agents charged with protecting President Obama seem to have taken a keen interest in the Birther movement, the committed group of anti-Obama activists around the country who claim the president was born in Kenya, not Hawaii, and is thus ineligible to serve. The idea has been widely and repeatedly debunked (see FactCheck.org’s thorough takedown here), but that hasn’t stopped Birthers from doggedly making their case in American courtrooms, to US attorneys, and even to a rural county grand jury, in the hopes that a judge will rule in their favor and Obama might eventually be removed from office. Those efforts have failed spectacularly, but they seem to have succeeded in placing the Birthers on the radar of the Secret Service.

At least a half-dozen prominent anti-Obama activists who’ve petitioned various federal agencies or courts to investigate the president’s citizenship or publicly questioned his eligibility to serve say they’ve been visited by Secret Service or Homeland Security agents. Dr. Orly Taitz, the “Queen Bee” of the Birther movement, says, “A number of my supporters had visits from Secret Service, from different agencies, INS, Homeland Security. There are a whole number of people who got these visits to intimidate and harrass them.” She says federal agents visited her home once; however, she was not there to be interviewed.*

Of particular concern to the Secret Service, it seems, are the individuals who are trying to interest federal prosecutors in bringing criminal charges against the president for fraud and treason, a movement spearheaded by a retired Navy lieutenant commander, Walter Fitzpatrick III. Last March, Fitzpatrick sent an “indictment” for treason to the US attorney for the Eastern District of Tennessee, asking the prosecutors to act on it. Two days later, he noted on his blog, two Secret Service agents showed up at his house along with a couple of local cops, to see what sort of threat he might pose to the president. “I’m still here,” Fitzpatrick reported afterward. Fitzpatrick was contacted by the Secret Service again in July after he sent his complaint to the US attorney in Washington, DC.

Meanwhile, Fitzpatrick has encouraged others to take the indictment to prosecutors around the country in the hopes that one will bite. Georgia computer-store owner Carl Swensson is a fan of Fitzpatrick’s and a member of the American Grand Jury movement, which seeks to hold “citizen grand juries” that bring indictments against the president. In an interview, he said that last spring, he took Fitzpatrick’s treason complaint to the US attorney for the Northern District of Georgia. Shortly afterward, two Secret Service agents showed up at his office.

“They said they had to make sure anyone who put forward this information wasn’t a physical threat to the president,” says Swensson. He says he engaged them in a polite debate about the 14th Amendment and showed them “proof” that Obama’s Hawaii birth certificate was a fake. He also said that he intended to keep bringing the treason charges to federal prosecutors all around the country. They left, and he hasn’t heard from them since. Swensson doesn’t have any hard feelings about the visit, which did little to dampen his enthusiasm for his project. “They were doing their job. They were professional. They tried to dissuade me from what I was doing, but I wasn’t going to have anything to do with that,” he says.

Indeed, far from discouraging the Birther movement, the law enforcement visits have become something of a badge of honor for anti-Obama activists, an event proudly reported to supporters. In November, Dale Laudenslager, another Fitzpatrick follower, who sent his criminal complaint to the FBI, got a visit from a Secret Service agent and some local cops shortly before Obama was supposed to appear in nearby Allentown. Laudenslager posted the name and phone number of the agent on Fitzpatrick’s website. I called the number, which did indeed connect me to the Secret Service special agent, who admitted that he “may have” visited Laudenslager.

In November, outspoken Birther Rev. James David Manning, a black minister in Harlem, called for Obama to be “jailed, hung and shot,” among other things, in one of his online video sermons urging Tea Partiers to “go viral” with the birth certificate issue. A few days later, he reported that the CIA and some NYC detectives had come to talk with him, prompting Manning to release a new video suggesting that his arrest for threatening the president was “imminent.” (He has not been arrested.)

Stephen Pidgeon, a Washington state lawyer who brought one of the first civil suits challenging Obama’s eligibility to hold office, went so far as to alert WorldNetDaily when he suspected that the Department of Homeland Security, the Secret Service’s parent agency, had him under surveillance. (He says he spotted black SUVs following him to work.) The conservative website, which has been a major source of publicity for the Birther movement (even buying billboards reading “Where’s the Birth Certificate?“), immediately posted a story about Pidgeon’s suspicions, helping to further fuel the perception that the government has it in for anti-Obama activists.

The Secret Service won’t comment on whether it has focused on the Birthers or whether it has sent agents to talk to any members of that movement. But Malcolm Wiley, a spokesman for the agency, says the Secret Service is not interested in the issue of the president’s citizenship. “Our mandate is to protect the president of the United States,” he said. Wiley did lay out the generic criteria for what might prompt a Secret Service inquiry. Writing a letter doesn’t necessarily qualify as making a threat. But “an unusual direction of interest”—that is, an unhealthy obsession with the president—might get the agency’s attention. By that measure, Birthers are an obvious red flag.

The real question, of course, is whether any of the Birthers might actually be dangerous.  Many of the plaintiffs in the Birther lawsuits have been active or former military people. Orly Taitz reportedly recruited many of them at the Knob Creek Machine Gun Shoot and military gun show, a semi-annual Kentucky event that’s a hotbed of right-wing and racist radicalism. And some of the Birthers’ anti-Obama rhetoric can be pretty extreme. Taitz has even suggested that “it might be time” to exercise “our second amendment right to bear arms and organise in militias.”

Still, Jerrold Post thinks that the president probably doesn’t have much to fear from them. A veteran of the CIA, Post is a psychiatrist who specializes in the psychology of political violence. He used to evaluate people who tried to break in to the White House to see just how dangerous they might be. He says the Birthers do seem to cling fast to the idea that the president, for whatever reason, must be illegitimate. But, he adds, “When they are channeling that into legal means like litigation or threats of public exposure, one is less worried about physical injury. Having said that, I think it’s perfectly appropriate for the Secret Service to be watchful.”

* This story has been updated to include additional comments from Dr. Taitz. The original version said she had not responded to a request for an interview.