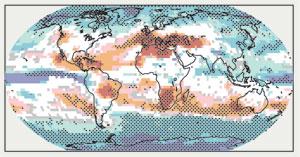 Climate skeptics like to say that there’s still plenty of room for debate over the science of global warming. When it comes to the phenomenon itself, they’re wrong: Scientific consensus solidly affirms the fact that the planet is warming, largely thanks to human activity. We know that the glaciers are still melting and that the last decade was warmest on record. But it’s true that there are still some major holes in the science. The latest issue of Nature identifies four key areas where much more research is needed:

Regional climate forecasts: Most climate modeling is geared toward assessing global effects of rising temperatures, and aren’t as well suited for looking at local and regional variability and impacts. Planning for climate adaptation requires better understanding of those local differences, making it crucial to develop better tools for assessing them.

Precipitation forecasts: Rising global temperatures are expected to increase evaporation and speed up the global hydrological cycle, which will increase droughts in subtropical areas and precipitation in areas of higher latitudes. But models are bad at predicting much more than that, and they don’t do a very good job of even accounting for how much precipitation patterns have already changed.

Aerosols: Another major uncertainty in climate science are airborne liquid and solid particles–things like sulphates, black carbon, sea salt and dust. It’s not clear how and to what extent they influence temperature and rainfall, in large part because there’s not that much data about what exactly is floating around in our atmosphere. The general understanding is that the aerosols cool the climate by blocking sunlight, but some aerosols like black carbon actually absorb sunlight and increase warming. Thus, the net effect is unclear.

Palaeoclimate data: There aren’t reliable thermometer records prior to 1850, so scientists must look to other sources of evidence on historical temperatures, like tree rings, sediment in lakes, stalagmites, and glacial movement. While the preponderance of the evidence across those data sources shows clear warming trends, there remains a lively debate about the appropriate use and interpretation of proxies.

The Nature paper notes that it is extremely difficult for scientists to discuss these areas when they don’t yet have the right tools. The climate change denial machine—which takes any level of uncertainty as an excuse to dismiss climate change entirely—has made it nearly impossible for scientists to discuss uncertainties in what is already a complex and highly technical field. And that machine is actively undermining scientists’ ability to address these holes in the research. “This climate of suspicion we’re working in is insane,” said Gavin Schmidt, a climate modeler at NASA’s Goddard Institute for Space Studies in New York. “It’s drowning our ability to soberly communicate gaps in our science.”