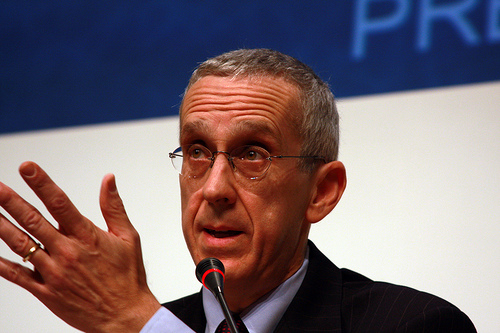 It’s been two months since the climate summit at Copenhagen sputtered to a finish without producing a binding treaty to tackle global warming. Now, United States climate envoy Todd Stern is downplaying hopes that this year’s summit in Mexico will produce a treaty, either.

Stern avoided stating outright that a legally binding agreement on climate change is possible this year. “I hope that we can get to a full legal treaty in December, but I’m not going to make any predictions one way or the other,” he said at the Center for American Progress on Tuesday. “I’m also not going to fall into the trap of saying if it’s not that, we’ve got a failure.”

Instead, Stern said, it’s important that “strong progress be made” and “pragmatic steps” taken. He added that the public expectations before the Copenhagen summit “were quite elevated beyond what was going on on the ground,” and warned against raising expectations too high for the next summit.

As we reported in December, the future of the last-minute accord at Copenhagen is not yet clear. Leaders of a small group of countries—the US, China, India, Brazil, and South Africa—negotiated a political deal outside the normal protocols of the United Nations Framework Convention on Climate Change. It was not formally adopted by member states; instead, countries can voluntarily “associate” with the accord. The deadline for doing so was Jan. 31, though that deadline wasn’t really enforced. So far 95 countries out of 192 have associated with the agreement.

Stern expressed hope that other nations would sign on eventually. “I do believe that they will sign on to the accord because the consequences of not doing so are so serious,” he said. But he also observed that the commitments from some countries remain “ambiguous,” and that China, India, and some other countries are trying to “limit the impact” of the deal. Yet it’s hard to see how commitments could be construed as much more ambiguous than those of the US, which has pledged to cut emissions “in the range of 17%, in conformity with anticipated U.S. energy and climate legislation, recognizing that the final target will be reported to the Secretariat in light of enacted legislation.”

Stern also dismissed the suggestion that the US Congress’ failure to pass a domestic climate law played a major role in the outcome of the summit. “I don’t think that our situation was a core problem, if you will, last year,” he said. Still, the chances of a bill passing the Senate this year seem to grow bleaker by the day. And if there was one lesson that Copenhagen made clear, it was the absence of trust among the most important players in the negotiations that the US and other major emitters will actually make good on their promises.