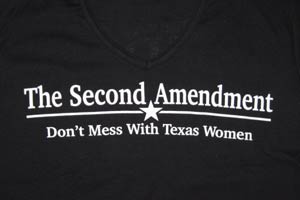 Photo courtesty of Medina for Governor

Debra Medina almost certainly won’t be the next governor of Texas. According to recent polls from Public Policy and Rasmussen, the Tea Party insurgent‘s momentum has crashed full-speed into the proverbial wall—or, as the case may have it, Sen. Kay Bailey Hutchison’s wire fence. But I think the fixation, by TPM and others, on Medina’s drop in the polls in the wake of her Vesuvian performance on Glenn Beck really misses the point. Medina was bound to lose at least a handful of swing votes; what’s remarkable is just how much of her base (16 to 20 percent of likely voters, depending on the poll) is sticking with her.

The fervor of Medina’s supporters doesn’t seem so out of place, though, when you consider this: Perhaps more than any other candidate in a major race in 2010, Medina has gotten cozy with Oath Keepers, the group of heavily-armed constitutionalists profiled in Justine Sharrock’s must-read March/April cover story. It’s a natural fit: a candidate who has vowed to nullify tyrannical laws and fight federal agencies like the EPA befriending a group whose members pledge to disobey any orders they personally deem unconstitutional.

Last Saturday, Medina campaigned in San Antonio alongside Oath Keepers founder Stewart Rhodes and former sheriff Richard Mack, one of the group’s most high-profile activists. It wasn’t a one-time thing, either: Back in December, when Medina was still polling in the low single digits, she and Mack hooked up for five campaign stops in two days as part of her “Take Back Texas” tour. (Here‘s a nice snapshot.)

Medina and Mack even teamed up to produce a documentary about the state sovereignty movement, which you can buy for $5 at Medina’s campaign website. The film’s tagline captures the mutual mood of her campaign and the Oath Keepers: “Will you join the army preparing to stand against federal tyranny?” Following her disastrous Beck interview earlier this month—during which the right’s wingnut media pitbull (go figure) more or less outed Medina as a 9/11 Truther— Mack told Chris Matthews that Beck “owes Debra Medina an apology.” At this point, Medina and Mack are practically running mates. Too bad he hails from Arizona.