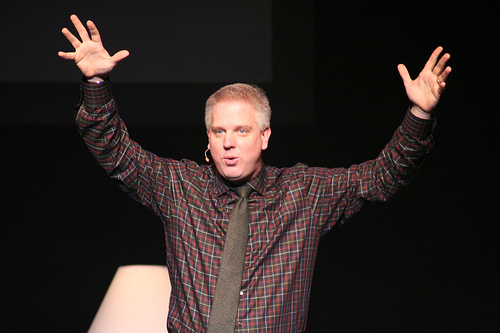 Is Glenn Beck a closet environmentalist? That might sound like a strange question. In his lucrative book and television career, the conservative talk show host regularly bashes the science of climate change and anyone who believes in it. Last week he mocked climate scientists for being “alarmists” who believe that “we’re all going to die in a fiery flood.” Not long ago he touted the global warming chapter of his An Inconvenient Book as “kryptonite against your Gore-worshipping psycho friends.” And in May 2007 he hosted an hour-long television special, Exposed: The Climate of Fear, featuring an all-star lineup of climate change denialists and promising the “other side of the climate debate that you don’t hear anywhere.” Beck was also, of course, the driving force behind the successful right-wing push last year to bring down Obama’s green jobs guru, Van Jones.

But an interview with Beck in USA Weekend revealed that his private views on climate are very different from those he espouses on his day job. In fact, Beck appears not only to be convinced that global warming is real, but that it’s a genuine problem:

“You’d be an idiot not to notice the temperature change,” he said. He also says there’s a legit case that global warming has, at least in part, been caused by mankind.

The article also says that Beck has felt compelled to “buy a home with a ‘green’ design and using energy-saving products.” “I’m willing to do anything but use the CFLs,” he tells USA Weekend, referring to energy efficient light bulbs. “I put them in once and couldn’t stand the way they lit up the room.” These are hardly the words or actions of a hardcore climate denialist.

The comments—made in passing during the course of a longer interview—attracted almost no attention. But they’ve stirred up a frenzy among right-wingers in certain corners of the web who are horrified to hear their standard-bearer sounding suspiciously like Al Gore. Prison Planet, a news hub for conservative conspiracy theorists, called his remarks “a shocking stab in the back of conservatives who consider Beck to be their anointed leader.” A post on the interview provoked more than 200 comments on the right-wing website Free Republic, with one asking whether Beck was “moving to the left,” and another saying the news was the “final straw for Beck with me.” WorldNetDaily attempts to explain the remarks by musing that they perhaps reflect Beck’s “kinder, gentler” side. (In the same interview, Beck also admits to liking liberal celebrity George Clooney, and it’s noted that his publicist is Matt Hiltzik, a Democratic heavy hitter who worked on Hillary Clinton’s Senate campaign.)

On his show, Beck had plenty of criticism of the USA Weekend story. But he didn’t raise any objections to the article’s portrayal of his environmental views. That must leave his supporters contemplating the possibility that when it comes to climate change, Beck may not really be one of them.