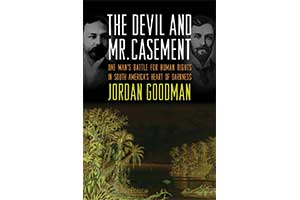 In 1910, a British diplomat named Roger Casement traveled to a remote corner of the Peruvian Amazon to investigate reports that the local Indians were being enslaved as rubber tappers, and tortured and murdered if they resisted. The assignment was similar to one he’d carried out a few years earlier in the Congo, which, as readers of Adam Hochschild‘s King Leopold’s Ghost may recall, helped expose the atrocities inside the Belgian monarch’s private colony. In Peru, Casement found horrors that rivaled those in the heart of Africa (see “Blood and Treasure“), but this time, the crimes weren’t being carried out in the name of a foreign ruler, but a public company based in London.

The outlines of this story are all too familiar: A firm enriches itself with the sweat and blood of people half a world away, far from consumers’ consciences or the prying eyes of watchdogs. The Devil and Mr. Casement presents a fast-paced account of this groundbreaking effort to hold corporations accountable for their misdeeds, as well as a detailed portrait of Casement, a closet Irish revolutionary (and even more deeply closeted gay man) who becomes obsessed with beating “the devil” of the book’s title, a ruthless Peruvian rubber baron.

It’s not giving away the ending to say there’s no happy one to this story. However, author Jordan Goodman buries a fascinating, disturbing detail that establishes his drama’s continued relevance: The Putumayo Indians who were rubber slaves a century ago are the ancestors of the indigenous people in the recent documentary Crude, which follows their ongoing struggle to get American oil companies to take responsibility for polluting their rainforest home.