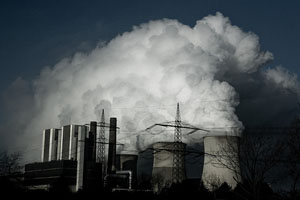 In its eagerness to woo Republicans with nuclear-friendly policies, the Obama administration plans to hand out $54.5 billion in government-backed loans to kick-start a nuclear renaissance. On Tuesday, it announced the first beneficiary of this largesse—and apparently the best candidate it could find was a proposed plant that’s been put on hold by federal regulators due to serious safety concerns.

The Department of Energy (DOE) will underwrite a loan of $8.3 billion to Southern Company’s two planned reactors at Plant Vogtle in Burke County, Georgia—”just the first of what we hope will be many new nuclear projects,” Carol Browner, the White House adviser on climate and energy, told reporters on Tuesday. Browner said the loan guarantee demonstrates the administration’s commitment to working with Republicans on energy; handing major concessions to nuclear interests has been a key part of the Obama administration’s strategy to pass a climate bill this year.

Yet last October, federal regulators discovered significant safety concerns in the design proposal for the Westinghouse AP1000 reactors that are slated to be used for the Georgia project and six others around the country. The Nuclear Regulatory Commission (NRC) rejected the proposal after determining that the shield design would not protect the reactor from earthquakes, tornadoes, hurricanes, and airplane crashes. Michael Johnson, director of the NRC’s Office of New Reactors, noted that the agency had “consistently laid out our questions” to Westinghouse about the design, which did not yet meet “fundamental engineering standards.”

Westinghouse says it will submit a new design this month. But it’s unclear when the NRC would even review the do-over. “It’s ludicrous they would be handing out a loan guarantee for a reactor design that’s been delayed so much, and there’s no review schedule now,” says Tom Clements, southeast regional nuclear coordinator for Friends of the Earth. “We don’t even know if it can be licensed.”

The loan guarantee is conditional upon NRC approval. But if the project ever gets off the ground, there are plenty of red flags signaling that it’s a very bad investment for taxpayers. The nuclear loan guarantees are intended to finance up to 80 percent of the total project cost for new reactors. Southern Company’s most recent estimate for the two reactors is $14 billion, though according to independent projections the true cost of a single reactor may be closer to $12 billion. That means that the government could pour money into a new plant, only to see construction halt when the price tag rises and there are insufficient funds to complete it. Kevin Kamps, a radioactive waste specialist with Beyond Nuclear, points out because the design has not even been finalized or approved yet, “the utility has essentially no idea how much the reactor is going to cost.” (The Vogtle site has an ominous history of massive price overruns: The plant’s existing reactors were originally estimated to cost $1 billion each. But by the time they were completed in the 1980s, the bill had reached nearly $9 billion per reactor.)

The nuclear industry’s shaky financial outlook is well documented. The nonpartisan Congressional Budget Office estimated in 2003 that the risk of default on loan guarantees is “very high—well above 50 percent.” Yet in a call with reporters on Tuesday, Chu said he had not heard of that CBO study. And the warning signs aren’t only to be found in dry accounting analyses—soaring cost projections have already caused the cancellation of a number of proposed plants in the US. In February, the city of San Antonio pulled out of a partnership with Toshiba and NRG Energy to build a new reactor because the anticipated costs had spiraled out of control. That project was, until recently, thought to be a leading candidate for a DOE loan guarantee.

Last year, Georgia Power, a subsidiary of Southern Company, announced that its cost estimate for the Vogtle reactors had dropped $1.5 billion. In fact, the total cost projection remains at $14 billion. But the state’s legislature had approved a bill allowing Georgia Power to pass $1.5 billion of that sum onto ratepayers via a rate increase that kicks in next year—even though the reactors won’t be completed until 2017. The Southern Alliance for Clean Energy and the Fulton County Taxpayer’s Foundation have sued the Georgia Public Service Commission and Gov. Sonny Perdue challenging the rate hike. (South Carolina, North Carolina, and Florida have similar laws allowing utilities to charge higher rates to finance proposed nuclear plants.) “People could pay for them and not get anything if they’re canceled,” says Clements of FOE. The head of Georgia Power has acknowledged that the final tab for the reactors will likely vary considerably from the original projections—and argues that the company shouldn’t be required to regularly disclose changes to its cost estimates.

Opponents of the loan guarantees point to Long Island’s infamous case of Shoreham Nuclear Power Plant. It took 20 years and cost $6 billion to build, but was never put into commercial operation. Two decades after the troubled project was finally shut down, ratepayers are still paying for it. “There is not even a shred of evidence that US utilities, having not had a successful reactor order since 1973, can build a reactor anywhere near projected costs,” said Michael Mariotte, executive director of the Nuclear Information and Resource Service. “If any of these projects actually get under way, we can expect the utilities to be coming back to the taxpayer trough for more.”