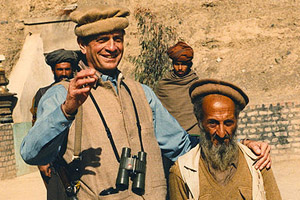 Former Congressman Charlie Wilson (D-TX) died today of an apparent heart attack at the age of 76. I’m guessing he felt lucky to have made it this far, given that he lived about 25 years longer than he was supposed to. His heart started to give out back in 1985–possibly the result of heavy drinking and cocaine use–and doctors gave him 18 months to live. (In 2007, he finally got a transplant.) The colorful Texas pol retired from Congress in 1996 as something of a legend, and not just because of his fondness for Playboy bunnies and his hot-chick Hill staffers known as “Charlie’s Angels.” But Wilson became even more outsized after the 2007 release of the Tom Hanks film, “Charlie Wilson’s War,” which lionized him for his role in helping to covertly arm the Afghan mujahideen in the 1980s and forcing the Soviets out of Afghanistan.

I met Wilson back in 1998, when he had faded temporarily from the public eye. He was doing what most retired congressmen do in Washington: working as a well-paid lobbyist, primarily for the country of Pakistan. It wasn’t the most noble work, despite what Wilson seemed to think about his efforts to get the U.S. government to sell weapons and fighter jets to Pakistan. Of course, that was before the Afghan men he’d helped arm played a key role in the attacks on the World Trade Center. I was working on a story about the democratic fundraiser, Terry McAuliffe, who had been making some trips to Pakistan, and rumor had it that Wilson was pissed because he thought McAuliffe was trying to steal away his client. So I called him. True to form, Wilson suggested that I meet him for a drink at DC’s storied Madison Hotel, in the old, smoky back-room bar where it was easy to imagine him cutting many a deal over the years. He was more charming than Tom Hanks, and the “Good Time” moniker seemed truly apt. It was hard not to like the guy; unfortunately, he didn’t have much intelligence to pass on and ended up being a pretty lousy source. He seemed old even then. Still, hanging out in the bar with Wilson made me feel like I’d touched a part of history. What’s been harder to figure out since then is what to make of that history. I suspect the obituary writers will have the same problem with him.