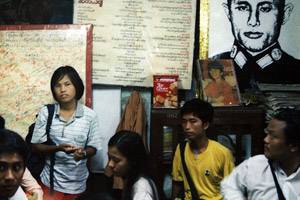 Rangoon, monsoon season 2009: Erratic downpours silence a city that long ago gave in to a spectacular creep of mold. I meet “Sun Ray” in the shadow of a hotel. “Actually, I am not fine,” he begins, each syllable inflected with urgency. We begin a serpentine route, first to an empty jetty, then a karaoke bar, and finally to a beer parlor. There, the 27-year-old dissident slowly peels off his disguise—a hairnet, a baggy anorak, and a pair of fake glasses. Days earlier, he’d fled the city trailed by a government agent who followed him onto a first public bus, then a second, and a third, until Sun Ray offered to pay his fare. “I’m just doing my job,” said the agent. “And I’m doing mine,” he replied. He finally lost the agent after a ferry trip, en route to one of dozens of remote village hideouts. He’d returned to Rangoon that morning smuggled in the cargo hold of a friend’s truck.

When I first met Sun Ray two weeks earlier, he’d seemed eager, confident, blowing in late to a meeting with other Burmese activists, dressed in blue jeans and profuse with apologies. Amid discussions about the upcoming 2010 Burmese elections and the role of US sanctions, he took incessant calls on his cell phone from “network members” holding vigil before the notorious Insein prison, where Nobel Peace Prize laureate Aung San Suu Kyi stood trial for breaking house arrest after she sheltered an American, John Yettaw, who’d swum to her guarded lakeside compound uninvited. At the end of each call, Sun Ray would relay reports to someone—he would not say whom—who passed them to the Democratic Voice of Burma, an Oslo-based news organization that Burmese rely on for credible news.

For dissidents like Sun Ray and others that I spoke to, this trial was freighted with a novel dilemma: Protest the latest twist of fate of their beloved leader, whose on-again off-again house arrest dates back to even before the junta invalidated the 1990 electoral victory of her party, the National League for Democracy? Or try to secure education and development aid for the people, preparing them for the day when the junta would finally falter.

Anyway, with sheer survival a more pressing concern for the average Burmese, love for “the Lady,” however great, was hardly enough to prompt street protests, much less revolution. Since 1962, Burma’s military rulers have maintained a death grip on the economy. Both the mass protests of 1988 and the 2007 monk-led Saffron Revolution were sparked by inept handling of the economy; both were brutally suppressed (pdf). As the general population has spiraled ever deeper into poverty, the junta has fattened (pdf) off sales of its resources, chiefly minerals and natural gas. (See “9 Dirtiest Exports From Burma”.)

Much of this money has disappeared into vanity projects. In 2005, Senior General Than Shwe and his junta consecrated their isolation from the population by uprooting the capital from Rangoon to a vast, built-from-scratch city in the searing central flatlands called Nay Pyi Taw, “Royal Capital.” It is today a fortified fantasyland boasting golf courses and a theme park with giant purple plastic lotuses. Above it all towers a gargantuan pagoda that glows a lurid gold and green.

Then there was the partly built “cyber city” I discovered sprawling eerily empty in the cool hills east of Mandalay. Its identical office buildings, all cut from gray concrete with mirrored windows, mostly failed to draw investors, though a company run by a junta crony occupied some of the space. The original plan called for a 50- to 100-acre park to concentrate Burma’s limited IT community, according to a Mandalay computer entrepreneur who proposed the idea. But in the hands of the junta, the plan quickly morphed into a 10,000-acre pipe dream of a Burmese Bangalore, intended to lure foreign firms. This in a country with harsh Internet censorship (pdf) and intermittent electricity.

Perhaps the junta’s greatest construction folly lies in the glittering waters of Kachin State, which borders China’s Yunnan province. According to one legend, two sister rivers, both promised to wed the lowlands, took different courses before deciding to marry him together. From that confluence, called the Myitsone, begins the 1,350-mile journey of Burma’s mighty Irrawaddy River.

There, a Chinese multinational and a Burmese crony company are damming the river. The dam will generate electricity worth at least $500 million per year—most to be transmitted to China. An estimated 15,000 Burmese (pdf) will be displaced. “It’s not just the displacements. This is a place for recreation. It has deep cultural significance,” seethed my guide. From the shade of a sacred banyan tree, he gestured out over fields, restaurants, pagodas, churches. “All this will be destroyed.”

Aung San Suu Kyi’s trial dragged on for three months, despite global opprobrium and the intervention of Sen. Jim Webb (D-Va.). The first member of Congress to visit Burma in 10 years, Webb secured Yettaw’s release and signaled the Obama administration’s openness to dialogue—even as it maintains sanctions and calls for the release of Aung San Suu Kyi and Burma’s 2,177 other political prisoners.

Her NLD party, the major opposition group, maintains that targeted sanctions, aimed at the ranking generals, are important. “Of course it bears suffering for our people,” said U Win Tin, the NLD’s eightysomething chief strategist, a revered journalist who spent 19 years in detention. “At the same time there must be more engagement. The carrot and stick.” But other activists believe that Western sanctions have taken too heavy a toll on the population while scarcely touching the junta, and that change will only come when the junta cracks internally. In hopes of that day, even some of the most revolution-minded dissidents have joined the burgeoning civil society movement, activists who are distributing aid, teaching, and quietly learning to govern.

When I last saw Sun Ray back at the beer parlor, he told me that only one thing could cause him to flee Burma. “I will leave for a temporary educational program, which is useful for the country.” Midnight passed; a plate of fried chicken feet wilted untouched on the table as hot blasts of mildew mingled with faint jasmine. The last of Rangoon’s electric generators had fallen silent, relieved by cicadas. Surely even the hardiest of government spies would have given up the chase by now. Sun Ray slipped away and vanished down a maze of wine-dark streets. —The author continues to report from Burma; her name is being withheld for her safety.

In 2006, MoJo human rights reporter Mac McClelland found herself living in Thailand with activists engaged in battling Burma’s dictatorship. What she didn’t know at the time: Those activists were associates of a US-designated terrorist organization. To read an article about Mac’s adventures with the activists/terrorists, click here. To see a slideshow of Burma’s dirtiest exports, click here.