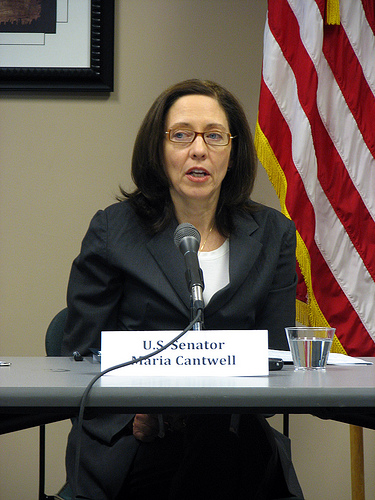 Ready for the battle of the climate bills? As John Kerry, Lindsey Graham and Joe Lieberman hammer out climate legislation, their biggest challenge may not be coal-state Democrats, or Republicans who deny global warming—but a bipartisan pair of senators who believe they’ve already produced  better legislation.

Sens. Maria Cantwell (D-Wash.) and Susan Collins (R-Maine) introduced climate legislation last November, attracting almost no attention—despite the fact that bipartisan bills dealing with Obama’s major domestic policy initiatives belong on the endangered species list these days. Collins has been supportive of previous climate bills, and is seen as one of a small handful of potential Republican “yes” votes for legislation this year. But the pair like to point out that they’ve actually written a bipartisan bill, while Kerry, Graham and Lieberman get all the attention for just talking about one. “It’s very difficult to judge what’s actually in Sen. Kerry’s bill when he has not yet produced an actual bill,” Collins told reporters on Wednesday at an event sponsored by the Bipartisan Policy Center. “I think it’s changed 25 times in the last 25 days,” Cantwell said. Collins added: “Rather than seeing parts of our bill cannibalized and put into another bill, I think they should take a look at coming on to our legislation.”

The Carbon Limits and Energy for America’s Renewal Act, or CLEAR, uses a “cap-and-dividend” approach to cutting carbon dioxide emissions. Basically, this is a lot like the cap-and-trade system entrenched in the Waxman-Markey climate bill passed by the House last year. But there are some key differences. Under cap and trade, all emitters are required to comply with a cap on greenhouse gases. Those who emit too much can buy pollution permits from those who emit less than their limit. But in cap and dividend, the majority of pollution permits are auctioned off only to the first-sellers of fossil fuels—that is, oil refineries and coal-mining companies. Seventy-five percent of the money raised from the sale of those permits is returned to energy consumers via a rebate. The remaining 25 percent would go to renewable energy and energy efficiency programs.

Proponents of this system argue that it’s a lot simpler than cap and trade, mainly because it doesn’t require a complex trading system for permits. The legislation drafted by Cantwell and Collins is only 39 pages—a dramatic contrast with the Waxman-Markey bill in the House, which clocked in at 946 pages.

Cantwell’s biggest concern with both the Waxman-Markey bill and the effort by Kerry, Graham and Lieberman is their reliance on a carbon market to encourage polluters to cut their emissions. She fears that if private trading in pollution permits and their derivatives is not carefully regulated and sufficiently transparent, it could lead to the kind of risky financial behavior that ran wild on Wall Street before the economic meltdown. “We’re not going to look for any back doors that are just going to allow the kinds of manipulation and abuse that’s happened in the European markets or in our credit default swap market to take place here,” she says. Cantwell also favors a strong rebate program, which she argues is the best way to help consumers deal with the rise in energy prices that will result if the government puts a price on carbon pollution.

The Cantwell-Collins measure has won support from groups like the AARP, Public Citizen, and MoveOn, and from some outside-the-beltway environmental groups like 350.org and Chesapeake Climate Action Network, which has launched a Support the CLEAR Act website. A study of the bill from the Political Economy Research Institute at the University of Massachusetts Amherst released this week finds that its rebate program would be good for consumers, adequately insulating households from rising energy costs. Analyses from both the Nicholas Institute at Duke University and the World Resources Institute indicate that the bill would significantly reduce carbon emissions, though not quite as much as the cap-and-trade proposals under consideration.

But the Cantwell-Collins proposal has yet to muster much visible support in the Senate. Supporters say that’s only because the Kerry-Graham-Lieberman collaboration has sucked all the air out of the room, and because the Democratic leadership in the Senate is backing that effort. Cantwell said Wednesday that she and Collins are trying to gain more cosponsors.

If a climate bill is to pass the Senate, it will need all five senators who are currently spearheading efforts to cut greenhouse gas emissions. “Last time I checked we don’t have a lot of extras hanging out,” says Jason Grumet, president of the Bipartisan Policy Center and an adviser to President Barack Obama during the 2008 presidential campaign. “It’s safe to say you can’t pass legislation without support from Senators Cantwell and Collins. And you simply cannot pass climate legislation without support from Senators Kerry, Graham and Lieberman.” Environmental advocates have been working hard to bring Cantwell and Collins into the Kerry-Graham-Lieberman efforts. “We’ve been having fairly regular conversations with their offices,” says Kusai Merchant, a policy specialist at Environmental Defense Fund.

So far, Kerry, Graham and Lieberman have only shown senators an extended outline of their plan. Sources who have been briefed on their effort say that it will likely include some of the ideas proposed by Cantwell and Collins, such as a rebate system and tighter limits on trading. But Cantwell seemed to suggest that this wouldn’t be enough, saying they still “probably still have a difference of opinion” about carbon trading. For now, then, the pair is playing hard to get. Says Collins, “I certainly will take a look at the bill that is produced, but I’m very happy with the approach that we’ve taken.”