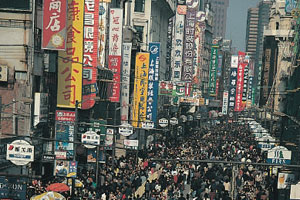 Is China, soon to surpass Japan as the world’s second-largest economy, a massive, dangerous bubble? According to one man who’s witnessed financial calamity at close range, the answer is an unabashed Yes. “As I see it, it is the greatest bubble in history with the most massive misallocation of wealth,” said James Rickards at a recent conference in China, according to Bloomberg News. Rickards is the former counsel for the infamous hedge fund Long-Term Capital Management, an all-star, Nobel Prize-powered fund that proceeded to melt down in 1998 and almost drag the global economy down with it. (For more on LTCM, read Kevin Drum’s “Capital City” cover story.) Whether his role helping save LTCM burnishes or blemishes his record is for you to decide, but his time there clearly colors his view of China today. Bloomberg reported that Rickards argued that “Chinese central bank’s balance sheet resembles that of a hedge fund buying dollars and short-selling the yuan.”

Echoing Rickards, a recent World Bank report warned of inflation and a property bubble in China. (Here’s a PDF of the report’s overview.) The World Bank suggested that China tighten up its overall monetary policy by raising interest rates to contain a housing bubble—something, you’ll remember, former Fed Chairman Alan Greenspan and current chair Ben Bernanke failed to do.)

To be sure, there are some startling parallels between China’s housing boom and the US’ bubble circa 2003-2007. There’s the economics—$560 billion of real estate was sold in China last year, the Times reported recently, an 80 percent increase from 2008—and the blinding details, too, like the home with crocodile skin bedposts and doors inlaid with Swarovski diamonds. Or the anonymous investor in Shanghai who bought 54 apartments in a single day. Or the $3 billion “floating city” in the north of China. The key question here is whether China’s in a boom or inflating a bubble—and without a Chinese version of, say, the Case-Shiller housing index, it’s hard to decipher what exactly is going on in the Middle Kingdom.

Figuring out whether China is indeed in the middle of a bubble—or a massive Ponzi scheme—is a lot tougher than in the US simply because China’s government is so opaque. Reliable data is hard to come by, which makes it far more difficult to understand what continues to fuel China’s rise—and if that’s a good thing or not. If it is a bubble, though, the ramifications of it popping could be just as disastrous and far-reaching as the US’ recent financial implosion.