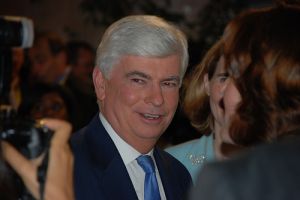 To much fanfare, Sen. Chris Dodd (D-Conn.) rolled out his new framework for a comprehensive bill to crack down on Wall Street and plug the holes in our patchwork of financial regulation. The bill, titled the Restoring American Financial Stability Act, would create, as anticipated, an independent Consumer Financial Protection Bureau housed in the Federal Reserve. It would also introduce a council of regulators to spot system-wide financial risk and tackle those problems and shine some light on the shadowy markets for financial products like derivatives, which draw their value from the price of commodities like corn and oil and are mostly unregulated. A breakdown of three main parts of the bill—consumer protection, a council of regulators, and unwinding failed big banks—is below. (There’ll be more analysis of the bill the more we dig into it.)

In the press conference today, Dodd made his case for the need to overhaul the regulation of banks, mortgage lenders, broker-dealers, and everyone in between. “As I stand before you today, our regulatory structure, which was constructed in a piecemeal fashion over many decades, remains hopelessly inadequate,” Dodd said. “There hasn’t been financial reform on the scale that I’m proposing this aftenoon since the 1930s.” He added, “We are still vulnerable to another crisis…It is certainly time to act.”

One of the most contentious parts of Dodd’s bill, a new consumer protection agency, didn’t look much different from descriptions that were leaked over the weekend. While housed in the Fed, Dodd’s proposed consumer agency would have a director appointed by the president and confirmed by the Senate, and a budget paid for by the Federal Reserve Board but not controlled by the Fed. The consumer agency would be able to write, supervise, and enforce its own rules for banks, credit unions, and other institutions with more than $10 billion in assets. The agency would also create a new consumer hotline and an “Office of Financial Literacy” to educate consumers on financial issues.

The council of regulators Dodd has proposed, dubbed the Financial Stability Oversight Council, would bring together the heads of nine existing  regulators. The council would identify systemic risk when it occurs, and recommend that risky non-bank companies (read: subprime mortgage lenders) be supervised by the Fed. With a 2/3 vote, the council could make a too-big-to-fail bank divest some of its holdings to pose less of a threat to the financial markets should it fail, a la Lehman Brothers.

On the too-big-to-fail front, the Financial Stability Oversight Council would not only react to bloated and dangerous banks but would help to prevent banks from getting so big. The council would require regulators to enforce a “Volcker Rule,” preventing federally insured banks from engaging in risky trading for their own benefit. This rule would also limit the kinds of relationships between insured banks and riskier hedge funds and private equity funds. Notable as well is the bill’s plan to make the largest banks pay into a bailout fund that would grow to $50 billion in size; that fund would be used to liquidate failed banks, instead of asking taxpayers to bail them out.