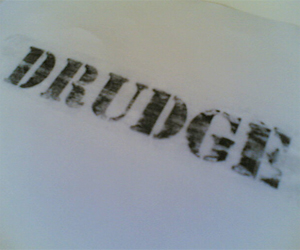 The Drudge Report, that right-leaning granddaddy of online rumor mills and news aggregators, is being blamed today—along with some other popular websites—for spreading a host of viruses to its readers. The best evidence available at current seems to bear that out: Through no fault of its own, the No. 3 political website in the world is apparently being used to transmit malware through popup ads.

Stalwart conservatives, though, took time out from their busy schedule of global warming and evolution denials to blame a vast left-wing conspiracy for the virus charges. “Democrats in the Senate are attempting to scare people away from alternative news websites by falsely claiming the sites contain dangerous software viruses,” claimed one (right-wing) alternative news website, which has branded the plot part of a larger liberal “cybersecurity agenda.”

For its part, Drudge Report—run by the mysterioso fedora-loving libertarian Matt Drudge—is running with the bait. “The Senate’s Committee on Environment and Public Works issued an urgent e-mail late Monday claiming the Drudge Report is ‘responsible for the many viruses popping up throughout the Senate,'” Drudge wrote in an online broadside. “The committee ordered hill staff: ‘Try to avoid’ the Drudge Report ‘for now.'”

According to Fox News, Sen. James Inhofe (R-Okla.)—Capitol Hill’s biggest believer in leftist global warming plots—is in on the conspiracy theory, too: “I suspect somebody was trying to make it look as if there’s a virus there to discourage people from using Drudge,” he said, adding: “We would encourage people to continue to use Drudge. That’s a great source.” (Which it is, frankly, if only to see what’s hot in Beltway hot air on any given day.)

Nice theory, but Elinor Mills over at CNET has the straight dope, including a screenshot of the malware popups. She also points out that the other website targeted by Senate staffers—that hot political potato, WhitePages.com—acknowledged its ads were spreading viruses and acted quickly to rein in its offending ad networks.

Mills also got the Senate committee’s side via a spokesperson, which kind of deflates the “vast left-wing conspiracy” meme:

“The Senate Help Desk, in discussing a recent increase in the number of virus infections in Senate computers, mentioned that it might be associated with pop-up ads appearing through certain websites, and they cited DrudgeReport.com and WhitePages.com as possible examples,” the spokesperson said in an e-mail statement. “Our non-partisan systems administrator notified both Majority and Minority staff that this issue had been brought to her attention. It is still not exactly clear where the increase in viruses is coming from, and staff have been advised to be cautious with outside Web sites at all times.”

But perhaps cyberconservatives can channel all their anger and fear into a new common cause: Defending Wal-Mart and Barbies.