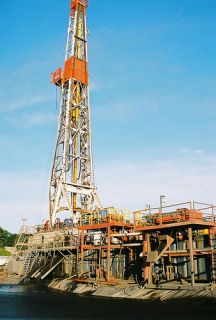 Will legislators use the climate bill as an excuse to let the natural gas industry run roughshod over clean water standards? If the industry gets its way, they might.

BP America Inc. and several other oil and gas giants are lobbying for the pending Senate climate and energy bill to recommend against the federal regulation of hydraulic fracturing, the controversial practice used to extract natural gas from shale, coal beds, and other geological formations, reports Energy & Environment Daily. Draft language that has been floated by the industry to legislators would allow natural gas extraction to continue with almost no regulation.

This move comes just days after the Environmental Protection Agency announced that an investigation into fracking, a practice which many fear is contaminating ground water supplies. Fracking uses a high-pressure blast of chemical compounds, sand, and water to fracture rock and access natural gas. The agency noted “concerns that hydraulic fracturing may impact ground water and surface water quality in ways that threaten human health and the environment.” This follows a 2004 study from the EPA during the Bush administration that concluded there is no risk of contamination of drinking water from fracturing, despite the fact that compounds have been found to contain toxic chemicals like benzene, toluene, ethylbenzene, and xylene. In 2005, the industry successfully lobbied to have fracking fluids exempted from the Safe Drinking Water Act—meaning companies don’t have to report exactly what they’re blasting into the ground.

Diesel fuel, which contains a number of carcinogens, was supposed to be off-limits even under the loosened rules. But a House investigation last month revealed that natural gas extraction companies like Halliburton have, in recent years, illegally injected hundreds of thousands of gallons of diesel into the ground. A recent report from the Environmental Working Group found that a single fracking site can contain enough benzene and other toxic chemicals to contaminate the amount of water New York state uses in a day. Despite this, the natural gas industry maintains that their fracking fluids are perfectly safe, and that their composition represents proprietary information that they shouldn’t have to disclose.

The practice is also getting more scrutiny as estimates of the amount of gas available in the US have dramatically increased, driving more interest in the fuel. The push to regulate carbon emissions is also likely to spur a boom in natural gas production. The fuel emits 30 percent less carbon dioxide than oil and 45 percent less than coal, and is often touted as the “bridge fuel” to renewable energy sources, as it’s relatively easy to modify coal-burning plants to use natural gas.

A “discussion draft” of proposed language on natural gas in the climate bill that E&E obtained suggests that states should have the authority over regulating the industry, not the federal government. It also states that companies should not be required to publicly disclose chemicals contained in fracturing fluids, as they are “trade secret information.” The draft came from BP, but is reportedly under consideration for inclusion in the climate bill that Sens. John Kerry (D-Mass.), Lindsey Graham (R-SC) and Joe Lieberman (I-Conn.) are expected to release soon. Natural gas, the language proclaims, is a “proven energy source that can provide substantial amounts of secure, clean energy to the Nation.”

In addition to the new EPA study, House Energy and Commerce Chairman Henry Waxman (D-Calif.) and Rep. Ed Markey (D-Mass.) in February announced an investigation into fracturing. Colorado Rep. Diane Degette (D) is also sponsoring House legislation that would bring fracking materials back under the Safe Drinking Water Act and force companies to make public the chemicals they use.