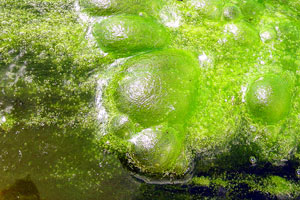 To say there’s no money in geoengineering right now is an understatement. But that hasn’t stopped either scientists or critics from fretting over the role of profit motive in climate-intervention politics.

I met Dan Whaley last week at the Asilomar International Conference on Climate Intervention Technologies. He’s the CEO of Climos, a company we’ve written about that is researching ways to sequester atmospheric carbon by seeding the seas with iron. The nutrient promotes blooms of phytoplankton, single-celled organisms that suck up carbon dioxide as the grow. When they die, in theory, they sink to depths where the carbon is trapped. (Eventually, Climos may be able to license the technology or sell carbon offsets based on the method—and other companies are attempting similar strategies with other nutrients.) But the jury is out on how long the carbon remains out of circulation. And as with most geoengineering schemes, iron fertilization raises more questions than it has answered.

The potential side effects of this and other methods are scary enough that ETC Group, an environmental advocacy organization, recently circulated a letter protesting the premise of the Asilomar gathering. “This is about people with commercial ties trying to offer a way out while we continue to pollute and use fossil fuels,” says Silvia Ribeiro, an ETC program manager. “It’s extremely convenient for politicians.”

The scientists would bristle at that description of their motives. But as for commercial ties, the conference’s nonprofit host (the Climate Response Fund) is run by Margaret Leinen—Dan Whaley’s mother. And while Leinen is a respected oceanographer, she’s also Climos’ cofounder and former chief scientific officer; and she and Whaley share patents on methods for measuring carbon absorption by phytoplankton. (See page 30 of ETC Group’s report.) This apparent conflict of interest was enough to keep Ken Caldeira, an influential climate scientist and leading geoengineering researcher at Stanford University, away from the Asilomar shindig. At least that’s what he told Joe Romm of ClimateProgress.org, who has followed the geoengineering debate.

Caldeira, in fact, is one of the many climate and geoengineering researchers who share the environmentalists’ biggest concern—that their research might be used by politicians and others as an excuse to further delay meaningful cuts in greenhouse-gas emissions. If this happened, he told the Washington Post, “the endgame of that process is pretty ugly.” When Romm asked Caldeira to explain what he meant, here’s how the scientist replied:

If we keep emitting greenhouse gases with the intent of offsetting the global warming with ever increasing loadings of particles in the stratosphere, we will be heading to a planet with extremely high [levels of] greenhouse gases and a thick stratospheric haze that we would need to main[tain] more-or-less indefinitely. This seems to be a dystopic world out of a science fiction story. First, we can assume the oceans have been heavily acidified with shellfish and corals largely a thing of the past. We can assume that ecosystems will be greatly affected by the high CO2/low sunlight conditions—similar to what Earth experienced hundreds of millions [of] years ago. The sunlight would likely be very diffuse—maybe good for portrait photography, but with unknown consequences for ecosystems.

Wow. If that doesn’t make you want to replace all your old light bulbs with CFLs, nothing will.

Whaley, for his part, thinks all the fretting over Climos’ motives seems a little premature. Company scientists, he says, will need to do 5 to 10 more years of research before they even know if their approach will work as anticipated—and whether it’ll be cost effective. He’s frustrated that Climos—and iron fertilization in general—has faced so much resistance. “There is a fallen-from-grace view that we have screwed up the planet, so what makes us think that we can fix it,” he told me. “But we do restore wetlands—we have a restorative capacity.”

David Keith, a University of Calgary climate researcher I’ve mentioned in earlier dispatches, believes there’s a role for private enterprise in mitigation. He’s launched his own start-up, in fact: Still in the earliest phases, it involves using huge fans to suck air through a structure that scrubs it of carbon dioxide. And since CO2 is more or less uniformly distributed in the air, there would be no need to locate the devices near pollution sources. “If I lie about how well my scrubber works, we’ll build it and find out it’s not true,” Keith says. “There’s no worry about someone sucking all the CO2 out of the atmosphere.”

But he and the other Asilomar attendees are not so laissez-faire when it comes to high-risk technologies like injecting sulfur into the skies. They would like these methods to remain open and unpatented. For instance, Keith has been working on an idea for a new class of self-elevating particles that could be used to reflect solar radiation back into space. It could easily be patented, he says, but he’s simply going to publish his idea instead, because, “the legal ownership that comes with a patent is not proper for a technology like this.”

Yet if, as many climate scientists envision, these more-invasive approaches move forward under government control, there will likely be plenty of work available. Lee Lane, codirector of the American Enterprise Institute’s Geoengineering Project, figures that contracts for research, development, construction, and even deployment of projects would get doled out to private companies. (After all, what doesn’t?)

Which raises the specter of a geoengineering-industrial complex. Martin Hoffert, a professor emeritus at the Earth Systems Group at New York University says you might end up with companies lobbying the government to launch projects under the guise of creating jobs and boosting the economy, regardless of what the science says.