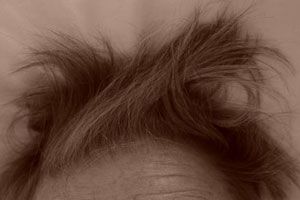 For his recent Mother Jones story on the origins of the “remy” hair used in high-end wigs and extensions worthy of Lady Gaga, Scott Carney sacrificed his own locks to a Hindu temple, but explained that clippings from short hair like his are used mainly as fertilizer or source material for a ubiquitous food additive called L-cysteine (L-cys for short). This amino acid, which gives hair its strength, also gives Noah’s bagels their bounce, puts the softness in Tastykakes, and imparts mom-made freshness to Lunchables. It’s a meat flavor enhancer and an expectorant, too—and has even turned up on a list of cigarette additives.

Human hair isn’t the only source of L-cys. You can extract it from poultry feathers or even synthesize it in a lab—although the end product is no different than what you’ll get by dumping tons of barbershop waste into vats of hydrochloric acid and separating the coveted compound from the resulting chemical stew. George Cherian, chairman of Indian hair exporter Raj Impex Hair, however, has long been the cheapest source of L-cys. You’d be hard pressed to find a richer source: Human hair contains up to 20 percent cysteine by weight, while duck feathers may yield only about half as much.

But you’d be equally hard pressed to find food manufacturers willing to admit that they use the hair-derived version. Vegans don’t take kindly to it, nor do Muslim religious authorities, who have deemed human hair derivatives haram—forbidden. (Jewish authorities have approved L-cysteine for use in kosher products, regardless of source.) Food manufacturers may also be sensitive to the ick factor (is it cannibalism?). Of the numerous companies I contacted, only supplement maker Twinlab—which markets L-cys for its powerful antioxidant properties—verified that it came from human hair.

Indeed, although the stuff is everywhere, trying to pinpoint the source of L-cys in any specific consumer product can be a nearly Kafkaesque exercise. While Cajun food maker Zatarain’s said it uses the synthetic product to create a “vegetarian chicken flavor” in its Blackened Chicken With Yellow Rice, I couldn’t get any sort of answer out of General Mills, Goya Foods, baker Orowheat, or Alacer Corp., which uses cysteine in its popular Emergen-C products.

A rep for the Tasty Baking Company says the cysteine in Tastykake products is derived from “sugar or syrup.” Rather than answer my question, Kraft simply noted that the cysteine in its Oscar Mayer-brand Lunchables prepackaged lunches is FDA approved (all types are), and that it comes from “leading suppliers.” Cereal maker Kellogg’s told me it no longer uses L-cys in Pop-Tarts, and that its formula specifics are proprietary in any case. Safeway proved more forthright: “It’s duck feathers,” the grocery chain’s rep for in-house bakery goods said in an email.

Rabbi Zushe Blech, a leading kosher food expert, counseled me to take all of it with a grain of cysteine hydrochloride. “No one makes the distinction—no one cares,” he said. Blech should know. His book, Kosher Food Production, devotes an entire chapter to L-cys, and because Jewish dietary law is so exacting, certifying agencies such as the Orthodox Union (with whom Blech is affiliated) likely know more about what’s in your food than the Food and Drug Administration does. To wit: An FDA spokesman could find me just one internal reference to cysteine’s hairy origins in the agency’s archives—from a 1982 memo.

While most suppliers differentiate between animal and nonanimal sources, the rabbi told me, few distinguish between duck and human. Processors favor human hair “because it’s twice as potent,” he explained. Blech added that many industrial food makers buy their cysteine prepackaged with yeast and other additives as bulk “dough conditioners,” without regard to the origin of the components. One researcher at Watson Inc., a company that specializes in dough conditioners, told me he insists on duck-feather cysteine, but added that he knows plenty of companies that don’t. There’s no real difference in the product, he conceded. “We just thought duck feathers were better.”