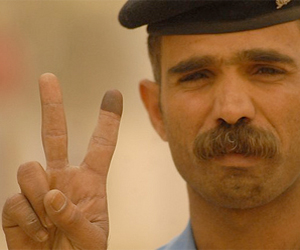 An Iraqi police officer shows the inkstains on his fingers, proof that he has voted in Iraq's March 7 election. | <a href="http://www.flickr.com/photos/soldiersmediacenter/4408951370/">US Army</a>

After a tense few weeks of ballot-counting and political posturing, the results of Iraq’s parliamentary elections were released Friday, and the country’s political future looks as murky as ever, with no party coming close to a majority of the body’s 325 seats. And with the status of US troops hanging in the balance, it looks as if an Iran-friendly firebrand cleric—and antagonizer of America—will play the role of kingmaker.

A few minor players got boosted to the big leagues in the Iraqi vote, held March 7. The biggest winner was the secular Shiite party of former Iraqi Prime Minister Ayad Allawi, whose faction gained 91 seats. That was just two more than the number retained by current Prime Minister Nuri al Maliki and his Shiite Dawa party, which means Maliki’s likely to lose his job. (As our own Kevin Drum pointed out yesterday, his coalition had already been preparing to throw him under the bus.) He’s not giving up without a fight, though, announcing his intentions to pull a Norm Coleman. “No way we will accept the results,” he told the New York Times. “These are preliminary results. We will challenge the results through the law and courts.”

Besides the electorate’s apparent rebuke to Maliki, a number of interesting story lines arose out of the election—whose turnout of about 60 percent is the highest ever recorded in post-Saddam balloting:

First is the turnout itself, which may suggest that Iraqis are less afraid of random violence than in previous elections in 2005 or 2009; it could also indicate that the populace has a stronger faith in its political institutions. Or it could mean that voter mobilization campaigns are starting to really take off among the country’s political factions. Kurdish parties from the oil-rich north picked up 43 seats, and partisans of the Iraqi National Alliance, led by radical Shiite cleric Moqtada al-Sadr, gained 70 seats. All were likely helped by lower turnout among the nation’s minority Sunni community, which had been disillusioned by the banning of many of its candidates—fairly or unfairly—as holdovers from Saddam Hussein’s Ba’athist Party.

At current, the man of the hour is Allawi, an enigmatic figure who has benefited in the past from big US support (and also been derided as an American puppet—though, to be fair, he criticized the US troop surge in Iraq, kinda sorta). But as regional expert Juan Cole notes in his blog, the real winner could end up being the firebrand Sadr. The often-militant cleric has vacillated between fighting US and Iraqi forces with his Madhi army, on one hand, and working within the political process on the other. Cole says Sadr still has it out for Maliki, too, thanks to the 2008 Battle of Basra—in which Maliki called Sadr’s bluff and launched an all-out (US-assisted) siege on the Mahdi army—a move that’s widely praised now for having chastened the insurgency and given the Iraqi government and military greater legitimacy. Before the election results were released, Sadr’s alliance had already announced it was ready to entertain offers from challengers to form a ruling coalition, which means 1) he’s much in demand, and 2) Maliki should start lining up his new career plans.

But with so many different factions gaining seats at the parliamentary table, whatever coalition emerges is likely to be weaker than Maliki’s was. And that means more gridlock in Baghdad—on reconciliation, on oil contracts, jobs and infrastructure—and on the levels of US troops, 50,000 of which are expected to remain after American combat forces complete their withdrawal in August.

Worse still is what a strengthened Sadr might mean for the region and US foreign policy in the long term. Says Cole: “He is a supporter of Iran, Hizbullah and Hamas, and once called himself the right hand of Hamas. If he becomes a kingmaker, the Middle East will lurch to the Right.”

Mind you, that was based on Cole’s prediction that the Sadr faction “may get as many as 40 seats”…30 fewer than their gains yesterday.