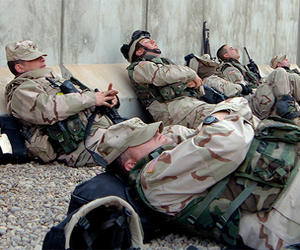 As a journalist, as well as a military veteran and former Iraq contractor, I try to keep abreast of the latest developments in America’s warfighting forces—public and private. Which is why I was unsurprised to find a new report this month by the DOD inspector general on KBR’s lazy Iraq contracting. But I was surprised when I found no references to the report in the mainstream media—even as KBR won a new $2.3 billion-plus contract for five more years of “services” in Iraq.

Here’s what the big news organizations missed: In 2008 and 2009, KBR got $5 million for its mechanics to maintain tactical vehicles (Humvees, big rigs) on a base north of Baghdad. (It’s the same base where ex-KBR employee Jamie Leigh Jones says she was raped, and where KBR burn pits are reportedly killing soldiers.) At the end of that time, when the Pentagon poked around, it found that by KBR’s own (slapdash) estimates, the firm’s workers only did work about 7 percent of the time they were on duty (and billing) for. When DOD investigators tried to run their own numbers, it got worse: In one month, 144 mechanics did an average of 43 minutes of work each.

The undiscovered report is likely to become bigger news soon: a commission set up by Congress to deal with waste and accountability in wartime contracting is meeting on Capitol Hill Monday, and its members want to know why KBR hasn’t offered a real plan to draw down its ranks in Iraq, even as US soldiers are withdrawing. By one estimate, KBR alone could cost taxpayers up to $193 million between now and August by keeping more people in the desert than we need. But even that estimate may be optimistic: One member of the wartime contracting commission, Charles Tiefer, tells me, “If KBR has underutilized rates in many of its operations anywhere near the rates found by the inspector general study…that would support a search for savings on the order of $300 million.” Tiefer told me: “You’re the only [journalist] who’s read the inspector general’s report.”

Check out the full story here. And pass it around. Maybe soon the mainstream media will start asking some questions, too.