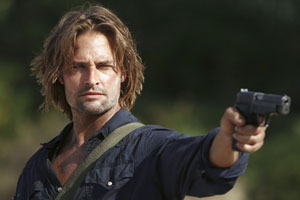 After three weeks of being MIA, Sawyer finally returned in last night’s episode of Lost. In addition to our favorite shirtless bad boy, “Recon” also featured a bargain with Widmore on the sub, more of crazy Claire acting crazy, and a pissed-off sideways world Charlotte.

We invited The JoshMeister, who runs a popular Lost blog and podcast, to join the fray for our MoJo chat this week. Thanks, Josh! Read our thoughts below, and keep coming back for more cool guests in the coming weeks.

Laurin: Can I just say right off the bat, it’s embarrassing how much I enjoyed last night’s episode.
Jen: Shirtless Sawyer is back!
Nikki: Hoorah!
Jen: Glad he wasn’t ALL good, even with the badge.
Laurin: The bad boy trying to do right. The age old tale.
Jen: And wonder if he will work with another LAPD officer, Michelle Rodriguez’s character.
Laurin: Oh, yes. I hear she’s coming back.
The JoshMeister: I just realized I’m the only male in the middle of a conversation about Sawyer being shirtless. Awkward!

Jen: So was Charlotte really on a date with Sawyer, or was she sent by Miles to do recon? Opinions? Also, it was nice to see a woman on the show w/out dirt on her face or hair all crazy.
The JoshMeister: That theory does make sense; my wife and I (and even Jim in the flash-sideways) all thought Miles was going to confront him about the date with Charlotte, but Miles ended up yelling at him about Australia instead.
Jen: Yeah, I thought so too. Especially as Charlotte works with Miles’ dad, aka Marvin Candle.
The JoshMeister: It wasn’t too surprising, however, that Charlotte shut him down when he came around again.
Jen:: I loved Charlotte’s response. It’s true, you can’t kick a girl out of bed at 3am…and then show up with puppydog eyes and a sad sunflower.
Laurin: I loved that too.
Jen: And a six-pack! Okay, two six-packs, in the case of Josh Holloway.
Laurin: WOW.
Jen: Do you think we’ll learn more about Dharma via Miles’s dad?
The JoshMeister: That would be interesting. I don’t know if we have enough flash-sideways left for that to happen, but maybe that could be how the writers explain what happened between the Incident and the Island sinking.
Jen: Speaking of mysteries, what do you think is locked up on the sub?
Nikki: I think its Desmond, brotha.

Jen: Ha. I hope it’s Desmond. I just realized the other day we don’t really know anything about his family.
The JoshMeister: Pylons? But that’s too simple of an explanation for LOST. Or maybe it’s a gigantic Ghost Busters-esque vacuum capable of sucking up the smoke monster.
Nikki: I was actually expecting Widmore to be Team MIB, so I was surprised he wanted to kill him. Or does he…?
Jen: dun dun DUN.
Laurin: My question is, and this is so basic, but if Flocke wants to leave the island and Widmore thinks he’s bad, why doesn’t he just let him leave. What’s the struggle? Will Flocke mean something bad for the world outside the island?
Jen: I think Widmore doesn’t want MIB off the island because he would still have MIB powers.
The JoshMeister: Perhaps the Man in Black would do something terrible if he was allowed to leave the Island.
Laurin: What, like, eco-disasters?
The JoshMeister: Imagine the smoke monster in Los Angeles. Yikes.

Jen: Some have suggested flash sideways Locke is actually Flocke…
Nikki: I got that sense from last week’s episode. With Locke trying to get Ben to make a power play.
Laurin: I like that theory. I don’t trust Locke/Flocke as far as I can throw him now.
The JoshMeister: Wow, cool theory. There’s certainly evidence to support it on the show. You’ve got Locke telling Kate about his mommy issues.
Laurin: Poor baby.
The JoshMeister: And you’ve got Locke yelling “Don’t tell me what I can’t do!” to the boy in the jungle.
Laurin: Don’t let Aaron become the new Flocke!

Jen: I was reading the Bible today and story of Jacob and Esau is looking pretty relevant. Especially as Jacob and Esau‘s mom helped Jacob steal his older brother’s birthright.
The JoshMeister: Jennifer, I just re-read that story recently as well.
Nikki: I should read that. And I’m also going to watch more Little House on the Prairie for clues on what’s going on.
Laurin: For reals.
Jen: What’d you think Josh? Applicable? And for sure, LHotP was awesome.
The JoshMeister: So, maybe this is too direct of an analogy, but perhaps Jacob and the Man in Black (Esau) are brothers?
Jen: Twins in the Bible story. There was a prophesy that they’d fight all their lives, Esau for forces of dark and Jacob for forces of good.
The JoshMeister: It makes a lot of sense!
Nikki: Would make sense that they’re brothers. Very Lost-ian too because it would give this epic battle a very human touch. And maybe add more parent issues!
Jen: Right, I like the idea of them being ordinary guys who the island changed into something else.

Nikki: I’m really hoping next week we get some answers about the island’s gifts, with Richard telling his story. Why does the island change people into smoke monsters and deities and crazy killers?
Jen: Yes, I’d love to see island as it was 400 years ago…or whenever that huge statue thing was around.
The JoshMeister: Oh man. I can’t wait for next week. I think it’s going to be SO awesome to get Richard’s back story!
Laurin: Me too. He’s the biggest mystery of them all. So I have a non-Richard question: In both Sawyer scenarios, he is chasing after the con man that contributed to his family’s demise. But wouldn’t one expect that Locke’s dad wouldn’t have conned Sawyer’s dad in his flash sideways?
The JoshMeister: Any particular reason why you think that, Laurin? Just because so many things are different in the flash-sideways? I presume Anthony Cooper was a conman long before 1977.
Nikki: It was suggested that Locke has a good relationship with his father in the sideways world, which means maybe he’s not bad in that universe?
The JoshMeister: Maybe Jim is going after the wrong guy. Maybe Anthony Cooper is actually innocent in the flash-sideways.
Jen: Ooh, that could be really interesting.
Nikki: That would be a fun twist.

Jen: Speaking of Sawyer, is Kate destined to be his true love/pain in the butt?
Laurin: True love/cry baby?
Nikki: She’s a pain in all universes.
Jen: Yeah, she’s lucky she’s cute. I was so waiting for Juliet to show up all episode.
The JoshMeister: A couple people on my live show last night really think Sawyer and Juliet were a better couple than “Skate.”
Nikki: This is slightly tangential, but I’ve never been able to figure out why Kate is so annoying. Evangeline Lilly is a good actress. Her character’s not overtly obnoxious. I feel like it’s the writing about her that is always just subpar. She’s never really had anything to do but be a part of a love triangle.
Jen: Maybe she’s like Hurley, more of a catalyst than an element in and of herself.
Laurin: I still love early Sawyer and Kate, and there is part of me that’s hoping they will come back. The Kate/Sawyer relationship (or lack thereof) of the last few seasons was annoying and Juliet definitely grew on me, and her relationship with Sawyer as well.
The JoshMeister: On the other hand, Sawyer and Kate both have similar pasts. It wouldn’t be too surprising to see them ending up together, especially since Kate has already tried Jack and that didn’t work out.
Laurin: Kate and Jack together would make the wettest blanket in the history of the universe.

Nikki: Ok, before we all go, favorite moment of the night?
The JoshMeister: Well, I loved the reveal in the flash-sideways that Sawyer (Jim) was actually a cop, and Miles being his partner was icing on the cake!
Nikki: I don’t know why, but I was also super excited by the initial reveal that Sawyer’s a cop. I thought that was really cool. Miles + Sawyer buddy comedy = please happen.
Jen: Hell yeah, Rush Hour 4. San Francisco version.
The JoshMeister: There were a lot of amazing moments in the episode, though.
Jen: Kate asking Claire what the ef that raccoon skull, fur armed thing in the bassinet was. I really do kind of love Crazy Claire and her crazy hair.
The JoshMeister: I loved hearing the Man in Black tell Kate about his mommy issues. Finally we get a tiny bit of his personal back story! Although I still really wish we knew his name, for crying out loud!
Nikki: Yes, loved that too. I wonder if there will be a backstory episode for him. I like the idea that his name is Esau.
Jen: I just can’t believe Lost has gotten me to read the Bible.
The JoshMeister: Funny how that works, isn’t it? The show that has a guy sleeping with two women in the same episode drives people to read the Bible.