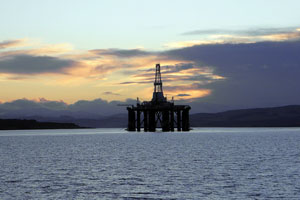 The Obama administration is set to announce announced today that it plans to open vast swaths of the outer continental shelf to offshore oil and gas extraction, making large areas of the eastern seaboard, the Gulf Coast, and Arctic Ocean available for drilling.

The New York Times and Los Angeles Times broke the story late last night; President Barack Obama and Interior Secretary Ken Salazar are expected to make made the formal announcement this morning. Here’s a map showing the new areas the plan will open up.

The move officials opens up virgin terrain that has been off limits to oil and gas companies for decades. In October 2008, amidst calls of “drill, baby, drill” from conservatives, Congress failed to renew the long-standing moratorium on offshore drilling. Months earlier, George W. Bush had lifted an 18-year-old executive ban on offshore drilling, which had originally been imposed by his father in 1990.

Obama, of course, could have issued his own order, but didn’t. As a candidate he changed his position on offshore drilling, a move that displeased his environmental supporters but which he touted as necessary to reaching bipartisan agreement on energy policy. “We can’t drill our way out of the problem,” said Obama at the time. “I also recognize that in the House and the Senate, there are Republicans who have very clear ideas about what they want, and at some point people are going to have to make some decisions,” he continued. “Do we want to keep on arguing, or are we going to get some things done?”

It’s an approach he’s maintained as president, again calling for expanded drilling in his State of the Union address in January. But while the area was officially opened to drilling in 2008, the new leasing plan from the Obama administration will mark the first sale of leases on these tracts of land. More drilling has been offered as a deal-sweetener on a climate and energy legislation, though it’s stirred up controversy in the Senate among coastal state Democrats.

There is some positive news in the initial reports on today’s announcement: the Pacific Coast, the area of the Atlantic from New Jersey northward, and Alaska’s Bristol Bay will not be included in the leasing. But environmental activists aren’t happy about how much the administration has given away in the new plan.

Oceana said in a statement that the group is “appalled” by Obama’s “wholesale assault on the oceans.” Environment America said in a statement to Mother Jones that the group is “outraged” by the expansion. “It makes no sense to threaten our beaches, wildlife and tourism industry with spills and other drilling disasters when we’re about to unleash the real solutions to oil dependence–cleaner cars and cleaner fuels.”

I’ll have more on the announcement shortly.