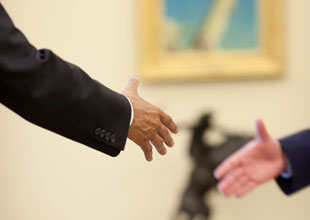 As the battle over financial reform intensifies—now that there’s a Senate bill in play—how tough will President get with the financial firms that have fielded scores of lobbyists to weaken or defeat this reform package?

But Dimon has been one of the leading foes of creating a consumer financial protection agency that would write and enforce rules governing financial products, such as credit cards and mortgages. Establishing such an outfit—either as a standalone agency (as the House voted to do last year) or as part of the Federal Reserve (which the Senate bill unveiled by Democratic Connecticut Sen. Chris Dodd, the Senate banking committee chairman, would do)—is a central component of the financial reform package that Obama is pushing. So, shouldn’t Obama be leaning on Dimon and other execs to soften their opposition?

Well, I’ll just say this. The president used the occasion of [Dimon and other corporate leaders] being here last year on small business lending to talk about not only the consumer financial protection agency but also overall financial reform. We believe it is in the interest of the American people to set rules of the road to give—to empower consumers with the information they need, and to do so in a way that doesn’t carve out certain lenders like payday lenders or things like that in protecting consumers.

Obama has repeatedly said he wants to see a strong consumer financial watchdog on the beat. But advocates for such an agency worry that the president isn’t using his muscle with the corporate execs fighting him on this front—especially the ones with whom he hobnobs. One advocate says, with Dimon in mind, “Why does the president keep having a guy over for dinner that is spending millions to kill his signature reform plan? That’s certainly a huge carrot, but what sticks are they using? It doesn’t seem like they’re focusing whatever capital they have with the industry on consumer issues.” This person, who wished not to be identified so as not to anger the White House, notes, “We’ve heard that the big institutions don’t feel like the president has ever really turned the screws on them about CFPA or lobbying behind closed doors.  He’s never said to them, ‘You have to stop lobbying against consumer, or else X, Y, and Z.’  He hasn’t been bad cop.”

Gibbs did not about Obama squeezing Dimon or anyone else. So I asked a followup: Will the president try to beat back the “tremendous lobbying effort” being waged by banks and other Wall Street firms against the consumer financial protection outfit? Gibbs replied:

The president…is committed to a strong consumer agency. He will seek opportunities as it relates to the overall bill to strengthen it, and will fight, as he said yesterday, any effort to weaken the legislation that he believes, again, provides very clear, commonsense rules of the road so that the American people are never on the hook for the excesses of Wall Street banks.

This was something of a low-key response. Gibbs did not embrace the opportunity to declare that the president would fight like hell—even if that meant facing down the CEOs and their lobbyists—to ensure the creation of a strong consumer financial protection unit. Perhaps the time for such fighting words will come. But anytime the White House has the chance to take a poke at the banks and chooses not to do so, consumer advocates worry about the prospects of setting up a strong watchdog.

When it comes to the consumer financial protection shop, Obama has displayed a decent outside game. But to get this passed over the objections and maneuverings of scores of Wall Street lobbyists, it wouldn’t hurt for him to work the inside—especially that guy from JPMorgan.