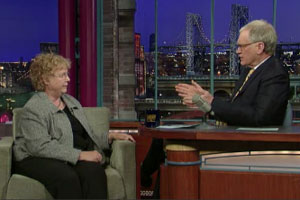 The TV host decided to invite Pam Stout to his show after reading about her in a New York Times article, which described the president of the Sandpoint, Idaho Tea Party Patriots as an unlikely revolutionary with ties to the controversial Oath Keepers movement.

On stage, though, Stout seemed more like a matronly schoolteacher than an angry crackpot. In a mild-mannered voice, she recounted her work helping low-income residents get on their feet and owning her own business, and expressed a simple desire to “go back to the old ideals.” She even got the New York audience to erupt into applause a few times, as she questioned the government’s overspending and anti-business mentality.

It’s a pretty fascinating interview, and one that embodies a schism in a movement that has gone from fringe to political powerhouse seemingly overnight. While Tea Party rallies have garnered attention for their violently anti-Obama rhetoric and connections to people like Glenn Beck, members like Stout aren’t so much extremists as old-school conservatives.

Still, even Stout seems to have a radical streak. Besides her Oath Keepers connection, she gave credence to birther claims when Letterman broached the topic. And she repeatedly said her hero was James DeMint—the uber-conservative senator from South Carolina who played a role in Snowpocalypse and called health care reform Obama’s “Waterloo.”

But what millions of people saw last night was a downright likeable advocate for change during a time of growing unrest. I have no doubt her appearance will recruit more to the burgeoning Tea Party cause.

Watch all three parts of the video below: