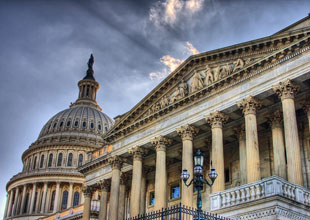 In early March, Sen. Lindsey Graham (R-S.C.) dropped some surprising news: The effort to tackle global warming via a cap-and-trade scheme is officially “dead.” Graham, John Kerry (D-Mass.), and Joe Lieberman (I-Conn.) will soon release details of an alternative plan for a bill to curb carbon emissions, which is expected to cobble together policy proposals from various lawmakers in the hopes of picking up a filibuster-proof 60 supporters. So, where does that leave the Waxman-Markey cap-and-trade legislation that squeaked through the House last summer by a single vote after months of convoluted dealmaking? No one really knows—and some House Democrats are none too happy about the Senate’s change of direction.

For almost a decade, cap and trade has been viewed as the approach with the best shot of making it into law. The idea is that the government imposes a cap on polluters, and those companies who emit too much can buy permits from companies that produce less than their limit. Nearly a year ago, Reps. Ed Markey (D-Mass.) and Henry Waxman (D-Calif.) introduced legislation to the House that sought to enact such a system. Months of torturous negotiations followed, in which major energy interests scrambled to grab a piece of the pie.

The coal bloc, led by Rep. Rick Boucher (D-Va.), carved out loopholes from pollution rules for aging coal-fired power plants and secured more than $60 billion for so-called “clean-coal” technology. Rep. Collin Peterson (D-Minn.) held the bill hostage until Big Ag’s demands were met. A coalition of Southern Democrats watered down a mandate requiring utilities to produce a certain amount of power from renewable sources. Oil refineries, manufacturers, and electric utilities were all handed a significant allotment of pollution credits free of charge. Yet despite the horse-trading, the carefully calibrated 946-page final bill retained its core goal: reducing greenhouse gas emissions by 17 percent by 2020 and more than 80 percent by 2050.

Now, the key players on the Senate climate effort are signaling that instead of focusing on a cap and trade scheme, they may instead adopt a hybrid approach that would scale back the permit-trading program, cap only electric utilities rather than polluters across the entire economy, and return revenues from the sale of pollution permits to consumers through an energy rebate program known as a dividend.
This new tack doesn’t mean the House would have to shelve its bill entirely, as its measure includes elements of the ideas that the Senate trio is considering. But some House lawmakers worry that the Senate will abandon the hard-won balance they struck between environmentalists and industry. Their fear is that if the Senate starts over, it will go back to negotiate with the special interests and give away the store in the process —resulting in even more handouts and less-ambitious curbs on carbon.

“The Senate gave up too early on a real cap,” says Rep. Jay Inslee (D-Wash.), a West Coast progressive who was a key player in the House negotiations, helping to hammer out provisions to insulate energy-intensive industries from price spikes. “We solved these problems. My one hope for the Senate is they will look at what we have done, because we have assuaged the concerns of coal states, steel states, aluminum states.” He adds, “I wish they would take a good look at the blueprint we gave them without giving up.”

Waxman’s office declined to comment on the Senate bill. Markey, the co-author, said he was waiting to see the text released by the three senators. But in remarks to reporters, he was lukewarm about the state of play in the upper chamber. “I’m a big fan of the House of Representatives, but I respect the Senate’s right to have a position,” he says. “So we’re going to be working with them.”

Also frustrated are those House Democrats who took a significant political hit by voting for the cap-and-trade bill, which was attacked by Republicans as a measure that would kill jobs, empower the “global warming Gestapo,” and cripple struggling consumers with exorbitant energy bills. One such Democrat is Tom Perriello, a freshman lawmaker from Virginia who wrested his seat from his Republican opponent in 2008 by just 727 votes. His vote for the Waxman-Markey bill has put him in the line of fire for this year’s midterm elections: During the region’s big snowstorm this winter, the GOP ran ads mocking his concern about global warming. “It’s been very frustrating to see an aggressive agenda that was oriented to rebuilding America’s competitive advantage in the world sitting on the Senate floor,” Perriello says.

Meanwhile, environmental advocates are bracing for what one described as a “bloodbath” when the Senate bill is finally released. In addition to scaling back ambitions for the bill, the Senate’s legislation is widely expected to include generous investments in conventional energy sources—namely nuclear power, coal, and offshore oil drilling. Environmental advocates are engaged in a tense debate over whether they can stomach a whole new raft of concessions. “It’s really clear that whatever attains 60 votes in the US Senate at this stage in the game is at best an extremely incremental step forward,” said Gillian Caldwell, campaign director at the environmental group 1Sky.

It’s not clear whether the approach being peddled by Kerry, Lieberman and Graham will manage to get 51 votes in the Senate, let alone the 60 needed to prevent the GOP from scuttling the effort. But even if the bill passes, Rep. Inslee warned that too many compromises won’t fly on his side of the Capitol: “I hope the Senate doesn’t think that somehow whatever they come up with is going to be something that will get 218 votes in the House.”