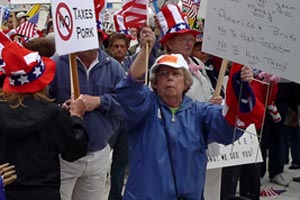 During the Tea Party protests on Capitol Hill last week, conservative activists warned that if Congress manages to pass health care legislation, their movement would become more formidable than ever. Mark Meckler, a national coordinator for the Tea Party Patriots—one of the larger and better-organized national groups—predicted that if the bill passes, “the tea party movement will double in size almost instantaneously.” The movement certainly got uglier as the vote came down to the wire on Sunday night. But it’s far from clear that Meckler’s prediction is about to come true.

In fact, far from fueling the tea partiers’ cause, the sweeping new health care law could suck the air right out of their movement. Many tea party activists have a lot to gain from reform—because their ranks are dominated by aging baby boomers. It’s no coincidence that the movement’s unofficial leader is the 69-year-old former congressman Dick Armey: A February CNN poll (PDF) found that more than 40 percent of self-identified Tea Partiers were over 50. This makes the movement’s opposition to the health care bill one of its most enduring paradoxes.

Last Tuesday, while Meckler was standing in front of the Cannon House office building forecasting a Tea Party explosion if a law should pass, Dale Chiusano, a resident of Bethesda, Maryland, sporting an “I choose liberty” sticker, walked up to me and started complaining that his health insurance company had kicked his 22-year-old daughter off the family plan during her senior year of college. Like so many tea partiers I’ve interviewed over the past year, Chiusano was already the beneficiary of government health care, having spent 30 years working for the federal government. Now retired, he still gets to keep his federal insurance plan, but he was outraged to discover that he had to “pay through your nose” to get his daughter a private plan during the gap between college and her first job.

I pointed out that the health care overhaul would have saved him a lot of money by allowing his daughter to stay on the family plan until she was 26, a fact he hadn’t known. Not that this information changed his mind—”you can’t have the federal government managing the family life!”—but people like Chiusano might feel differently once they see for themselves how the bill affects their pocketbooks.

Meckler claimed that the bill’s benefits were illusory. “Nobody will see any new insurance for four years, but they will see higher taxes,” he insisted. That’s incorrect: Many of the bill’s reforms will kick in almost immediately (PDF), including the provision allowing young people to stay on their parents’ insurance plans until age 26. Medicare recipients, who seem disproportionately represented in Tea Party rallies and town-hall meetings, will also see tremendous benefits right away.

The bill will end copays and deductible charges for preventive care, close the “donut hole” in Medicare’s prescription drug benefit (which forces the elderly to pay high out-of-pocket costs), and creates a $10 billion temporary fund to help offset the costs of insurance for people who retire before turning 65. That last benefit is likely to be a huge boon for Tea Party activists, but they’ll also benefit from provisions requiring insurance companies to cover everyone regardless of their preexisting conditions. Aging Tea Partiers are much likelier than young people to need such protection.

Meanwhile, the most controversial part of the plan and the one most loathed by the Tea Partiers—the individual mandate to buy insurance—won’t kick in for three or four years, and not until generous subsidies are in place to offset the costs for families with up to $88,000 in household income. As for the new taxes Meckler predicts will enrage the conservative activists overnight? Ron Pollack, executive director of Families USA, a nonprofit health care advocacy group, scoffs, “Nonsense. The excise tax [on high-benefit plans] doesn’t go into effect until 2018!” He says other tax increases have been carefully tailored to affect only the most affluent 2 or 3 percent of all Americans. While Armey—a former corporate lobbyist—might have to pay more for his coverage, the average Tea Partier will not.

The House Committee on Energy and Commerce has analyzed how the bill will benefit voters by congressional district—and it turns out that some of the nation’s conservative hotbeds have plenty to look forward to. Take the state of Georgia, which has launched many a Tea Party luminary. Even the affluent, white district of Rep. Tom Price—who, as a doctor, has been a key GOP point person in its fight to kill health care reform—will see significant improvements. According to the committee’s math, in Price’s district the reform bill will extend health insurance to 50,500 people, allow more than 50,000 young people to stay on their parents’ insurance plans, and provide immediate, significant savings to the district’s 70,000 Medicare beneficiaries.

Given facts like that, it’s easy to see why Tea Party leaders might be more than a little nervous about the health care bill passing. Despite their predictions to the contrary, it won’t be the end of the world as they know it—just possibly the end of their movement.