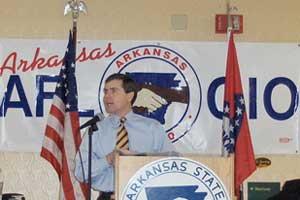 Since launching his Senate primary campaign in Arkansas this week, Bill Halter has zeroed in on Senator Blanche Lincoln’s failure to support the public option. This has prompted some to wonder if other progressive candidates might follow suit as liberal legislators continue to push to keep the proposal alive. Over at the Daily Dish, Jonathan Bernstein was bullish about the public option’s campaign comeback:

In fact, I expect virtually every Democrat in contested primaries during this and (if still not enacted) the next campaign cycle to support the public option, at least in any district in which Democrats have a chance to win.

Rallying behind the public option—which would set up a government-run health plan in the planned insurance exchange—could certainly give liberal candidates the opportunity to tap into the extensive grassroots network that mobilized behind the proposal last year. It was the last time that the liberal base seemed visibly excited and unified behind a single proposal coming out of Washington. Most Democratic candidates—whether they are incumbents or challengers—will sorely need to close the enthusiasm gap, and having a built-in constituency (and donor base) could give them a significant boost. In Halter’s case, the progressive netroots has already used his support of the public option to headline their fundraising efforts.

Such grassroots activity has also been matched by the public option’s revival on Capitol Hill, with some 34 senators saying they’d like the measure to be included in the reconciliation amendments (which would amend the bill that the Senate has already greenlighted, provided it passes the House). I’d bet against the public option happening now: despite the rising support for the plan, Reid would be disinclined to risk the vote, and even Pelosi has thrown cold water on the idea. But there’s still hope yet for the public option’s return. Sherrod Brown, for instance, has just announced that he intends to push for the measure in a separate bill, which itself could be passed via reconciliation, if need be. So progressive candidates could gain a rallying point that is legislatively as well as politically viable in the near-term future.

All this is assuming, of course, that the Democrats manage to pull it together and pass the comprehensive reform bill itself. At a time when even a stripped down version of the bill itself still hanging in the political balance, the call to revive the public option signals where liberal enthusiasm is coming from—and how progressive challengers might be able to capitalize upon it.