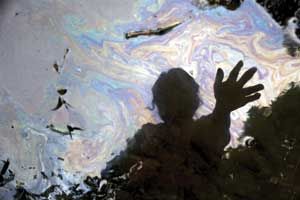 The San Francisco Chronicle reports that Chevron wants to rummage through filmmaker Joe Berlinger’s cutting room floor. The company has been embroiled in a massive lawsuit in Ecuador, where it’s being sued for $27 billion to clean up a swath of rainforest that’s been polluted by decades of oil drilling. Last year, Berlinger released Crude, an excellent documentary about this lengthy, complex legal battle. Though the film was sympathetic to the indigenous Ecuadorians who are the plaintiffs, it also gave Chevron plenty of screen time to explain why it believes it’s not responsible for pollution that caused by the wells’ previous owner, Texaco. When I interviewed Berlinger last year, he explained why he took this approach:

My attitude is, I am not a lawyer; I am not a doctor; I am not a scientist. I am a filmmaker and I want to present what each side is saying and let the viewer come to their own conclusion. Chevron has wrapped itself in some pretty good arguments that make you scratch your head. The moral responsibility is certainly at its door. I leave it to other people to figure out whether there’s legal responsibility.

Now Chevron is saying that outtakes from Crude could help its case. It does not seem to be implying that Berlinger hid anything, but rather that his unedited footage could reveal misconduct by the plaintiffs’ attorneys. Berlinger tells the Chron that he’ll resist Chevron’s move, saying that turning over his footage would create a chilling effect for other documentarians: “I would be equally resistant if the plaintiffs had been subpoenaing me. There’s an important First Amendment principle to defend.” Berlinger is expected to make his case against Chevron’s director’s cut in federal court in Manhattan later this week.