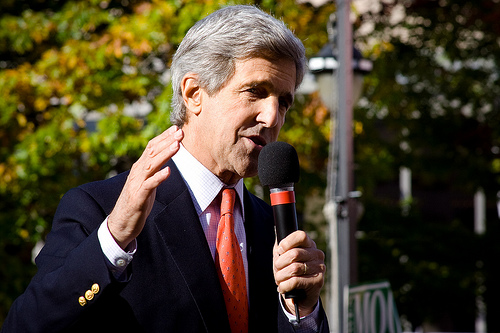 Senate majority leader Harry Reid has taken heat for suggesting that whether he moves energy or immigration legislation first depends on which bill looks most likely to pass. On Tuesday he suggested that climate legislation would have the edge because it’s “much further down the road” than immigration. And on Wednesday he was even more firm: “I am going to move forward on energy first.” But it remains far from clear that the climate and energy bill that was supposed to be unveiled this week by Sens. John Kerry (D-Mass.), Lindsey Graham (R-SC), and Joe Lieberman (I-Conn.) has sufficient backing. That’s because it appears that almost no-one except the co-authors has actually seen the bill.

Senators and advocates say they have seen outlines or heard summaries of what is expected to be called the “American Power Act.” And the co-authors sent a draft of the bill to the Environmental Protection Agency on Wednesday for analysis, a process that takes five to six weeks and evaluates both the environmental and economic impacts of the bill. But senators have said they haven’t seen the draft and can’t declare a position on it.

“They were going to give me a draft, but they have not released a draft,” said Sen. Olympia Snowe (R-Maine) on Monday. Snowe is one of only a few Republicans who has voted for cap and trade bills in the past and could be a possible “yes” vote. “I can’t make a decision on that. I’d like to, but I said I have to see the bill first.”

“I don’t know who’s seen the entire bill. My understanding is that there’s still moving pieces,” said Sen. Ben Cardin (D-Md.). “[Kerry] hasn’t pressed the start button yet.” Cardin has been a strong supporter of climate and energy legislation, though he listed concerns about how the bill would deal with offshore drilling and existing environmental laws.

Debbie Stabenow (D-Mich.) is one of ten industrial state Democrats who recently outlined demands for the bill. She said she thinks some of their concerns have been covered, but “I’m not sure all of them have been addressed.” She adds, “We have been briefed on summaries of what’s in it, but we want to see the actual language.”

Other fence-sitting senators who have said that they haven’t seen the draft yet and thus can’t say whether they could support it include Mark Pryor (D-Ark.), Mary Landrieu (D-La.), Mark Begich (D-Alaska), Mark Warner (D-Va.), and Susan Collins (R-Maine). John McCain (R-Ariz.), once a champion of climate legislation before backing away from the issue, said he hadn’t seen a bill or even talked to his close friend Graham or colleagues about it.

While the authors have touted the industry support they’ve drawn for the bill, it’s not yet clear whether that will pay off in votes. And it’s not just senators who are wondering what the draft will actually look like. Environmental advocates said they have yet to see legislative text. One compared the legislation to Sasquatch, quipping that people have heard talk of the details and glimpsed rough outlines of the bill, but no one has yet laid eyes on the real deal. The most detailed outline of the measure’s contents to date has come from a call between Kerry and progressive business leaders just last week. Even before the drama over Graham’s involvement, there were still numerous open questions about what the draft might contain. And with the release of the bill now delayed even further, the mystery surrounding the measure continues.