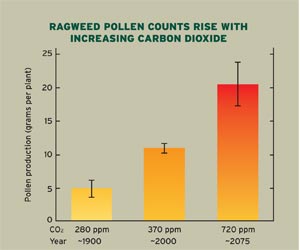 Ah, spring. Flowers! Lawn sports! Baby birds! Lots and lots of snot. Yes folks, this year’s pollen counts, especially in the southeast, are through the roof, and as our intrepid reporter Kate Sheppard wrote between sneezing fits last week, a new study from the National Wildlife Federation (NWF) suggests allergies will likely become even more fierce if the planet continues to heat up.

Researchers found that not only is spring coming earlier, making for a longer allergy season, but warmer weather allows hickory and oak, two of the most allergenic tree species, to thrive almost everywhere in the US. Another factor: Some plants, such as ragweed, are actually making more pollen as the environment changes. “As trees that use the wind to pollinate undergo stress from heat or lack of water, they begin to produce more pollen to compensate,” explained NWF climate scientist Amanda Staudt. Scientists have already observed this phenomenon in cities, where C02 levels are an average of 30 percent higher than in suburbs and rural areas. “Cities are where we’re seeing increased pollen production,” explains Demain.

Hayfever’s not the only allergic reaction that could worsen with climate change. Sometimes, pollen from certain plants can exacerbate food allergies to related plants, says Jeffrey Demain, director of the Allergy, Asthma and Immunology Center of Alaska. People who are genetically presdisposed to fruit and nut allergies, for example, may find that increased exposure to birch pollen makes their food reactions worse. Similarly, more ragweed pollen could aggravate symptoms in people allergic to melon. Also on the horizon: more aggressive poison ivy. A Duke university study found that poison ivy plants exposed to CO2 produced more potent urushiol, the allergen that causes the famous rash.

So is there any chance we’ll adapt by becoming less allergic to all that pollen? Probably not, says Demain. “We don’t become more resistant to allergies with exposure, there’s evidence that we actually become more allergic. We’ve actually seen more and more people with allergies for the past 30 years.” So what’s the solution? Ultimately, the only way to fix the problem is to cut our greenhouse gas emissions, says Staudt. In the meantime, since I’m not wild about the prospect of staying inside all allergy season long, here are three things we allergic people can do to sneeze less:

Each year the Asthma and Allergy Foundation of America publishes a list of the most allergenic cities. Here’s the top 10 from Spring 2010:

Later this week, watch for a Climate Desk piece on how climate change could send health care costs soaring.