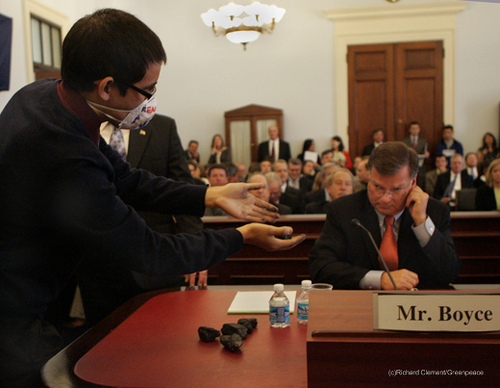 Photo of coal protest by Greenpeace, used with permission.

In the House debate over climate and energy legislation last summer, coal got a big slice of the pie. A $60 billion slice to be exact, in the form of subsidies to develop carbon capture technology (a.k.a. “clean coal”). But much of the coal industry spent millions of dollars in attempts to torpedo the legislation. On Wednesday, a House panel put the leaders of some of the country’s biggest coal companies on the hot seat, grilling them about what exactly they see as the future for their industry in what is almost inevitably going to be a carbon constrained world.

The hearing comes as coal is getting more scrutiny in Washington. There is, of course, the increased attention to mine safety in the wake of last week’s tragedy in West Virginia. And the Environmental Protection Agency also recently announced new guidelines governing the controversial practice of mountaintop removal. Meanwhile, the threat of greenhouse gas regulations through either Congress or the EPA looms in the distance, with the Senate expected to take up debate of a bill in the coming weeks.

The panelists before the House Select Committee for Energy Independence and Global Warming represented the different perspectives in the coal industry on the subject–from complete denial of problems in the industry to embracing the fact that coal faces an uncertain future. At one extreme was the Ohio Coal Association president Michael Carey, who thinks global warming is a fantasy and attempts to regulate greenhouse gases are part of a “war on coal.” Then there was Gregory Boyce, CEO of Peabody Energy Corporation, who admitted that “the science is strong” on climate change, but says that technology to capture and store emissions “should be available before regulation” begins (Steven Leer, CEO of Arch Coal, had a similar take).

And at the other end, you have Rio Tinto, a mining company that is part of the US Climate Action Partnership, the business-environmental coalition key in shaping the House climate bill, which has been working on climate issues since 1998. Preston Chiaro, chief executive for energy and minerals at Rio Tinto, made a clear case for engaging positively on legislation: “We will either shape policy, or we will have policy thrust upon us.”

The panel yielded some colorful exchanges between legislators and the coal executives, as Rep. Jay Inslee (D-Wash.) went after Carey’s “war on coal” comment. “We don’t give $60 billion to Al Qaeda,” said Inslee. “That’s a war.”

“If there is a war here, it is a war on our grandkids,” he continued. At at another point in the hearing, young protesters wearing face masks and covered in black soot stormed to the front of the room to deliver lumps of coal to the CEOs.

Rep. Ed Markey, chair of the committee and co-author of the House climate bill, made a similar plea for the industry to look at the billions in support they included in their bill. “I ask that you embrace the provisions of the Waxman-Markey bill that light the way ahead for your industry,” said Markey, adding later, “This legislation we passed in the House is intended on helping the coal industry.”

Wednesday’s panel was more theater than anything else, with House climate advocates attempting to put coal interests on the spot and highlight some of the competing view points on the future. But what these CEOs think about climate and where their businesses are heading is indeed interesting as we look down the road. These are big players in Washington; mining interests spent $26 million on lobbying last year, with Peabody ($5.8 million) and Arch Coal ($2.7 million) topping the list of spenders. Rio Tinto wasn’t far behind, at $1.1 million. Coal companies have also spent millions through the American Coalition for Clean Coal Electricity.

Despite the millions they spend on lobbying and PR for so-called “clean coal,” most companies are investing very little of their own funds in developing the technology. Instead, they keep calling for more government support, while most are working hard behind the scenes to defeat the kind of legislation that would give them that support.

Will major coal interests change their tune when the Senate debate heats up? Markey remained optimistic that they could be encouraged to work with Congress on solutions. “I still believe there is … a way of passing legislation with the coal industry in support,” said Markey after the hearing. “That’s my goal, that’s my hope. Whether or not we can realize that remains to be seen.”