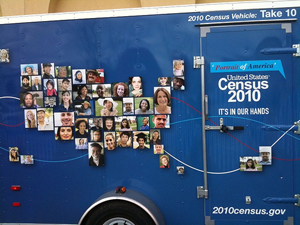 Right-wing activists have long railed against the census as an unconstitutional invasion of privacy, urging their followers not to complete the once-a-decade survey. “I dare them to try and come throw me in jail…Pull out my wife’s shotgun and see how that little ACS twerp likes being scared at the door,” crowed RedState blogger and CNN commentator Erick Erickson last week. But now top Republicans are realizing that this anti-census crusade could backfire badly—by threatening the existence of GOP congressional and legislature seats if conservative voters are under-counted.

Census results are used to draw the maps of congressional seats and state offices, based on population. They’re also used to allocate federal funds. Census returns from red states like Texas and Alabama are already below the national average, causing the GOP some anxiety. Though there are other factors that contribute to under-reporting—including immigration status, education, and income level—a right-wing revolt against the census could eliminate seats in conservative corners of the country. As my colleague David Corn has observed, even Michele Bachmann toned down her fervent anti-census rhetoric after she discovered her own seat could be at risk.

It’s not clear that a mass census boycott is actually occurring: Greg Sargent examined a sample of conservative districts and discovered higher-than-average reporting rates. But GOP party leaders are worried enough that they have launched campaigns urging conservatives to participate. Karl Rove has recorded a public service announcement urging Americans to fill out the form, the Wall Street Journal reported on Monday. And GOP Rep. Patrick McHenry has also sought to tamp down anti-census hysteria, telling conservatives that it’s their “constitutional duty” to complete the questionnaire, the Journal noted in another story. “It’s often difficult for conservatives to separate overall government intervention from a question as simple as the census,” McHenry added.

In fact, some right-wing activists are now hoping to use the census in service of their own causes. Right Wing Watch reports that nativist group American for Legal Immigration PAC (ALIPAC) is urging Congress to pass a new law that would allow the government to use census data “to detect, detain, and deport illegal immigrants” who fill it out. This effort has no legs, not least because the Constitution prohibits the government from asking about citizenship status when counting residents. But the sudden rush from conservatives to promote the census shows how quickly they’re willing to embrace government action—provided that it advances the right agenda.